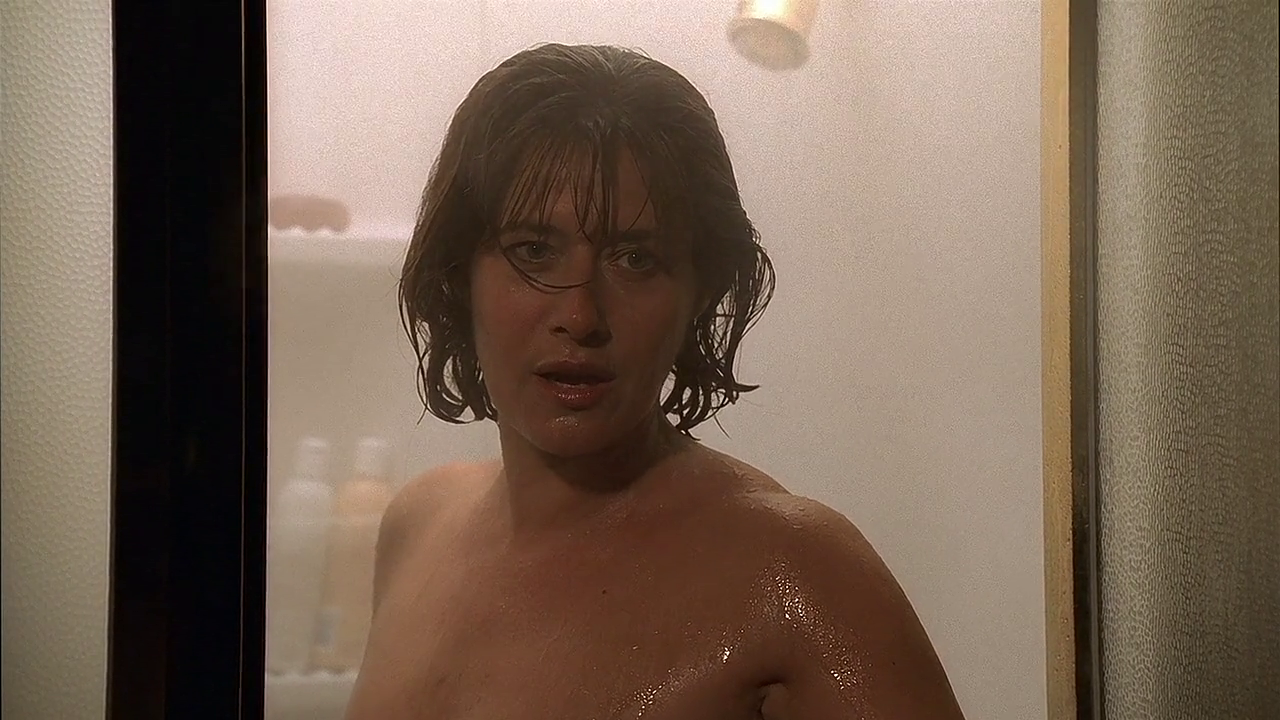 We ended “College” with Tony in the doghouse, and that’s where he remains at the beginning of “Pax Soprana,” an episode that doesn’t feature the explosiveness of the previous installments, but is a necessary chapter nonetheless in getting the plot wheels turning.

Tony is having problems getting it up. His libido is diminished, and Dr. Melfi thinks it’s the Prozac, but Tony traces the cause to another root: Jennifer herself. She finds her way into Tony’s dreams twice in the episode — sucking him off to The Jive Five’s “What Time Is It?”, and later once again as a sultry, sudsy, shower-head seductress. It isn’t long before Tony starts trying to get Carmela, his wife, and Irina, his mistress, to dress and act more like Dr. Melfi, his therapist. It goes over about as well as you’d expect (i.e. not very).

Yet Dr. Melfi isn’t a blameless party in this situation. There is some definite flirtation going on during their therapy sessions — they laugh at each other’s jokes, Tony brings her coffee, she starts to open up about her personal life — and this is what fuels his nighttime desires. Tony even calls her out on this behavior, and it begins her main arc throughout the series: Is Melfi only helping Tony because of the thrill?

She’s the main moral compass of The Sopranos universe, and I shouldn’t be questioning her judgment, but therein lies the mystery…

Every other doctor would have bailed on the prospect of treating a mob boss, yet Melfi didn’t flinch. And while the show hasn’t explored her personal life (we’ve only seen her outside the office once), there is the distinct likelihood that Melfi enjoys the challenges and risks involved with treating Mr. Soprano. She might even be attracted to him.

But, in the end, probably not. Tony professes his love to her near episode’s end — he likes how she is gentle, “like a mandolin” — and even kisses her. Although flattered, Melfi rejects his advances, telling him that these are just qualities he desires in the other women in his life. She only acts this way toward him because that is what the job entails. A teary-eyed Tony leaves the session like a schoolboy getting spurned by his crush.

While one half of “Pax Soprana” focuses on Tony’s many strifes with women — fights with Irina, arguments with Carmela, apathy with his mother and unrequited love with his therapist — the other half of the episode gets us back up to speed with the New Jersey mafia.

After Jackie Aprile’s death, Uncle Junior has been named the new Family boss, and he isn’t respecting old arrangements. He taxes Tony’s Jewish friend, Hesh Rabkin, at Livia’s request (she’s extremely angry that Tony put her in a nursing home). Meanwhile, his chief henchman (and North Jersey’s biggest douchebag) Mikey Palmice kills off and busts up some of the old crew’s top earners.

This isn’t exactly what the other capos had envisioned when Tony ceded leadership to Junior, and now they count on him to once again mend the situation.

The best scene of the episode comes near the end — Tony and Junior meet at a little league baseball game, where Tony tries to give his uncle some helpful analogies about leadership. He tells him about Pax Romana, the longest period of peace in the Roman Empire, and how Caesar Augustus enjoyed a long and fruitful reign because he never ate alone, and always shared his wealth.

The episode ends with Uncle Junior’s picture being pinned on a bulletin board in a Washington, D.C. office. It turns out that the waiters at his coronation dinner were all working undercover for the feds. Even though the scene works as a decent cliffhanger, the FBI will never pose a significant threat in The Sopranos universe, and so the ending to “Pax Soprana” — which is soundtracked to “Paparazzi” by Xzibit — comes off as a little lackluster.

The “real” ending occurs one scene earlier, in which Tony apologizes to Carmela for being a bad husband, and professes his eternal love for her. It’s a beautiful scene, with dialogue and a delivery that is both touching and sincere, though we have to question how much he really means it. Based on the location (the family pool), I’m willing to give him the benefit of the doubt.

Once again, this proves that The Sopranos is a show about family, not Family. Even though Uncle Junior’s mob storyline contained plenty of narrative heft, the most interesting aspects of the episode involved Tony’s erectile dysfunction.

One thought on “The Sopranos S1E6: “Pax Soprana””