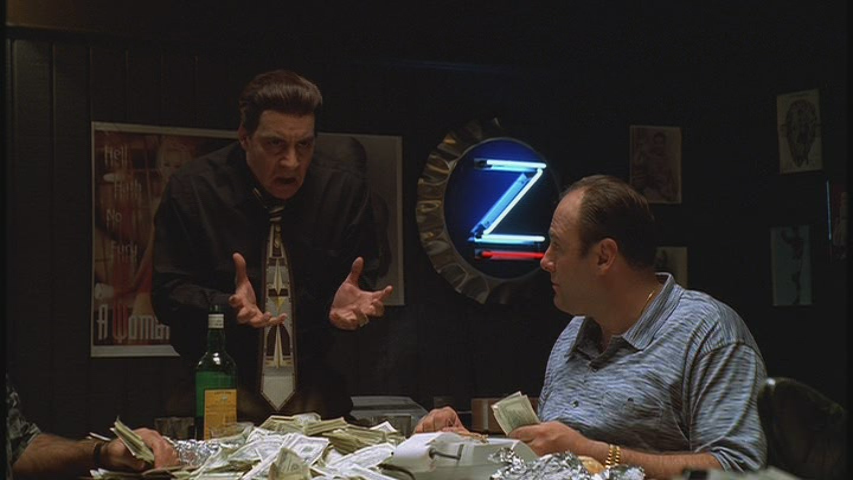 Early episodes are often difficult for the writers. It’s a time for the show’s creators to experiment with what works and what doesn’t. Often, these installments are little more than rehashes and variations of the pilot episode’s blueprint. But that’s not the case with “46 Long,” a second episode that arrives even more fully-formed than the premiere.

“46 Long” is the only Sopranos episode to begin with a cold open, or pre-credits sequence. It’s not a striking scene; rather very plain, just Tony’s crew sitting around, counting money, shooting the shit. A man on TV is talking about how the golden age of the mafia is over, echoing Tony’s fears from the pilot. Silvio’s Godfather III imitation is enough to lighten the mood — “Just when I thought I was out, they pull me back in.”

The scene is funny on the surface, but also darkly comic as well. To distract themselves from the truth, Tony and the gang call upon an impression of the past — a fictionalized impression of the past, at that. If they can only take comfort in an impersonation of a portrayal of the real thing, then the future doesn’t look too bright.

But still, this scene is great just for the way it casually spends time with the characters. The back-and-forth banter, the ball-busting and witty jabs — these are all things that the show will stake its reputation on. It’s scenes like this that make The Sopranos so special. This isn’t a mob show that relies on murder, guns and gore, but rather a mob show that focuses on the moments in between. In “46 Long,” we see how these in-between moments can build into tension capable of boiling over at any second.

There’s an excellent sequence early in the episode in which Tony becomes increasingly stressed by the various headaches in his life. He goes to take an important phone call at the strip club, but the Bada Bing’s dimwitted bartender doesn’t know how to transfer the call. Meanwhile, Christopher Moltisanti and his equally dimwitted buddy, Brendan Filone, are hijacking trucks from a company that belongs to Uncle Junior. At the same time, Paulie “Walnuts” and “Big Pussy” Bonpensiero are badgering Tony about their latest trivial task: finding the missing car of AJ Soprano’s science teacher.

It’s a fantastic scene that builds stress and tension while also laying out the main plot threads for the episode. Director Dan Attias can proudly hang his hat on this one. The quick editing is terrific.

The scene culminates with Tony’s phone call to his absent-minded mother, Livia. In the background, he hears her accidentally start a kitchen fire. Frantically, he dials up Carmela for help. As Tony storms out of the Bada Bing on the verge of another panic attack, the strippers show brief concern.

“46 Long” is an episode that, by Sopranos standards, manages to fit a good number of storylines in its 50-minute runtime. Some are less important than others, and most are established in Tony’s frantic phone call sequence, but all are crucial in expanding the series’ overall philosophy.

Tony’s therapy sessions with Dr. Melfi, in which he gets to unload his thoughts on all that’s transpiring, are the highlights of the hour. The scenes delve deep into Tony’s complicated inner psyche, and in doing so separates The Sopranos from being an average show about wise guys into something much more profound: a wise show about average guys.

Lorraine Bracco brings a warmth and magnetism to Dr. Melfi, and she no longer serves as the pure expository instrument she was in the pilot. She breaks down Tony’s issues with his mother and correctly surmises that Livia is the root cause of all his psychological problems. Melfi asks him to share one loving experience he had with his mother, and the only thing Tony can recall is a time when everyone in the family laughed because his father tripped and fell down the stairs.

Despite the pressures of being a mob boss and having a nihilistic mother, Tony is portrayed as a genuine good guy with his family. He dances around the kitchen with his wife, shows an interest in AJ’s academics (hence Paulie and Big Pussy recovering the teacher’s stolen car) and looks out the window in hopes that the ducks will come back to the swimming pool.

In later episodes, we will find that Tony is capable of terrible, unforgivable things, but in these early goings, series creator David Chase has set up a unique contrast in which we debate if Tony is a character we should be rooting for. Is he a kind and loving family man, or a vicious mob enforcer?

Chase implicates the role of the audience as one of his show’s central themes. Are we supposed to sympathize with this man? Why would we continue to watch such a terrible person? Does TV reinforce our roles as bystanders and onlookers, as opposed to a society that takes action? The episode’s closing scene underlies the importance of the latter.

In the final therapy scene, Dr. Melfi floats the idea that Tony might harbor an unspoken hatred for his mother. Even though her argument makes sense, it goes over about as well as you’d expect: Tony storms out of the office in anger.

The next we see him, he’s back at the Bada Bing, paralleling where he began the episode. All of the nagging issues that he’s been dealing with throughout the hour are ready to boil over. The bartender, Georgie, is once again having trouble with the telephone. Tony suddenly and violently beats him with the receiver before leaving in a fury. Framed in the doorway are the Bada Bing strippers, who momentarily stop to observe the commotion before resuming their dance.

This parallels Chase’s view of us, the audience, and the human race in general. The way we are often just casual bystanders who stand around and do nothing. We tune in once a week for some desensitized Mafia violence and then complain that there’s not enough blood. Essentially, we’re all just strippers on a pole.

It’s a thought-provoking metaphor to close the episode, even if it insults the viewer’s intelligence.