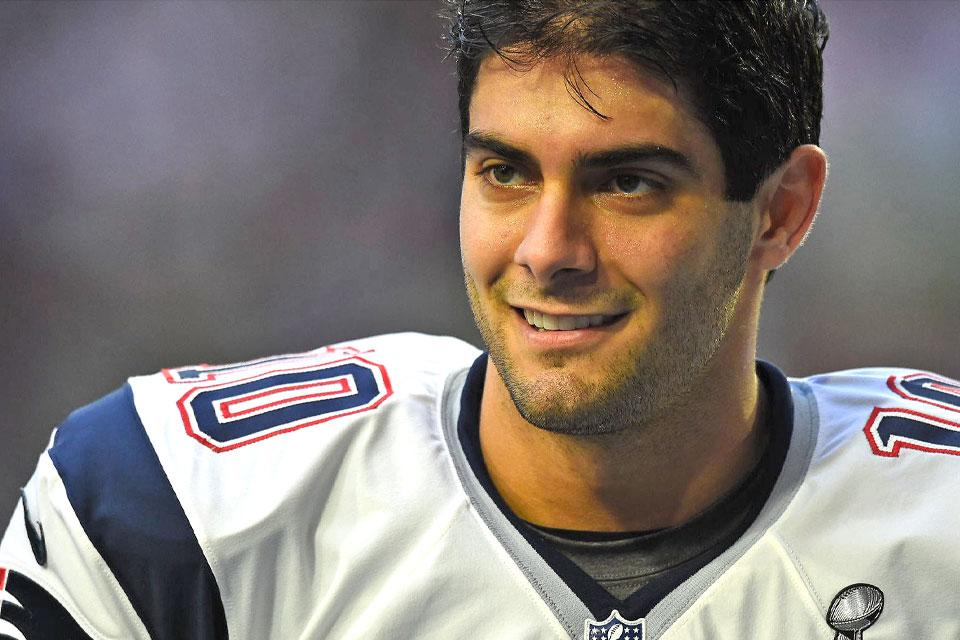 An ungodly amount of excitement happened on opening weekend in the National Football League, starting with Thursday’s dramatic Graham Gano debacle in Denver and ending with Chandler Catanzaro’s similar blunder Sunday night in Foxborough.  Nearly every game seemed to come down to the wire and – aside from Monday night’s all-time terrible slate – we were treated to quite possibly the greatest first week in NFL history.

On to the rankings…

Who would have thought that a New England team without Brady, Gronk, and two starting offensive linemen would be able to beat the preseason darling Super Bowl pick?  Bill Belichick, that’s who.  Chandler Catanzaro is the latest to be Jedi mind-tricked by the Sith Lord himself.

I can see it now: Trevor Siemian and Jimmy Garoppolo as the anti-Manning and anti-Brady of the new age.  If there’s one thing that can stop this madness from happening it’s the Denver defense, which is capable of stopping anything.

Aaron Rodgers is a dancer, a dapper dan fleet of foot, Fred Astaire when he maneuvers within the pocket.  He can also throw the football like no other mortal on this earth.  And he’s also in a funny new commercial.

The closest Alex Smith/Andy Reid have ever gotten to sharing a sentence with the word “exciting” is when the word is actually “exiting”, as in “…the playoffs early.”  That is true no longer. Overcoming a 21-point second-half deficit to win in overtime—without Jamaal Charles no less—is damned exciting and a harbinger of things to come.

I won’t give up on them just because of one loss to Jimmy Garoppolo.  It was a missed field goal that caused this embarrassment, after all.  And Carson Palmer seems to be alive and well again after his attempted suicide in last year’s NFC Championship drive.

It certainly wasn’t pretty, but a win is a win, no matter how ugly and grotesque.  But this team is banged up and the duct tape is starting to wear thin on this offensive line.

Graham Gano, a name befitting a kicker if ever there was one.  Graham Gano, you must know it deep in your heart that you made sure that the 20 (illegal) hits Cam Newton took to the head were all for naught.  Graham Gano, are you ready to confess?

AJ Green has bought up much of the property on Revis Island.  Andy Dalton, in turn, pretty much has a monopoly on red-haired football-guy merchandising.  This team was ready for a deep run last year before red-haired-football-guy broke his hand.  They are ready again; Andy Dalton rallies his troops with one wave of his bright red mane.

Do teams get bonus points in these rankings for “huge balls factor”?  Why, yes, fortunately they do.  The Raiders have HUGE balls.  They have potential to be the most exciting team in football.  As AC/DC sang: “He’s got big balls/She’s got big balls/But Del Rio’s got the biggest/Balls of them all.”

That front seven looks awfully scary, something straight out of nightmare.  7 sacks last game.  7!  But the J-E-T-S Jets still lost the game.  If Fitzpatrick can exorcise his old demons against Rex Ryan and Buffalo on Thursday, the obnoxious NYC fans may soon be out in abundance.

Eli Manning had one terrible interception and the G-Men escaped with the dub down in Dallas.  Fortunately for them, Terrance Williams doesn’t understand the interrelated concepts of out-of-bounds and running clock.  This offense has serious potential, though.  Serious potential.  Dare I say it:

The offense may actually open up more now that Calvin Johnson Jr. is dancing with the stars.  Matt Stafford has weapons from all angles—backfield, downfield, in the slot.  For now, though, we turn our Detroit-based interests to the Tigers.  Stay tuned for more Lions news in the coming months.

Joe Flacco is back and, elite?

The defense is strong and the quarterback play is the only major question mark going forward.  For now, Adrian Peterson’s dud of a performance is just a fantasy concern, nothing more, nothing less.

These guys can really sling the football.  Blake Bortles is the owner of The Arm That Will Not Be Fatigued and Allen Robinson is a star in the making.  I have a feeling they’ll play in a lot of “they-definitely-could-have-won-that-game” games this season.  Baby steps.

A win against the Chicago Bears does not constitute as an “earned win” and is therefore stricken from the record books.

Drew Brees is an immortal pigskin-tossing god.  Another 5,000-yard season is on deck.  And, if only for this week, Brandin Cooks is at least a demi-god.  Sometimes, however, you just can’t account for all the unseen factors, namely Jack Del Rio’s balls.

This is my least favorite team in all of football right now.  There I said it.  I’m glad that’s off my chest.

The Chicago Bears rule I applied to the Houston Texans (#18) applies tenfold when dealing with the Cleveland Browns.  Alas, it was their rule to begin with and it shall be theirs until the end of days.

“Must we?”—Andrew Luck, in regards to the team asking to wholeheartedly hop on his back for another season.

The Cult of Dak has lost a couple followers but it will soon be one of the fastest growing religions nationwide within the next few weeks.

Silver lining: you took the Chiefs to overtime.

Rebuttal: you blew a 21-point lead in the second half.

Counterpoint: you had a 21-point lead on the Chiefs?

Blaine Gabbert v. Case Keenum Monday Night 2k16 may go down as the most significant moment in trash-can history.  Let’s all get together and do it again sometime.

“You like that?”  No, Mr. Cousins, I did not enjoy it in the slightest.

Is the Matty Ice nickname still in use?

Nice guys will eventually get their time.  Just look at Shaun Hill.  All-around nice guy Marcus Mariota will get his moment too, but not this year.  If he’s lucky, he won’t have to wait as long as Shaun Hill.

How could I rank them below a team that scored 0 points?  Against the Forty-f**king-Niners?  Nay, that would be criminal.  In other news, RG3 is likely out for the season again.  Bones of glass only work for so long.

Writing “Los Angeles Rams” came more naturally than I thought it would.