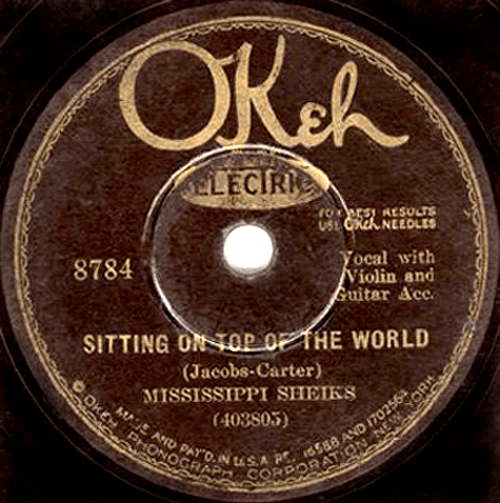 50. “Sitting on Top of the World” by Mississippi Sheiks

The Mississippi Sheiks put the “country” in country blues. With sawing fiddles, simple guitar and twangy vocals, the group scored a crossover hit with 1930’s “Sitting on Top of the World,” a song about abject stoicism in the face of impossible hardship. Only the Sheiks could combine folk, Gospel, country and Delta blues so effortlessly.

The lush balladry of The Ink Spots immediately became an international success, and “If I Didn’t Care” remains one of the top 10 selling singles to this day. It’s no surprise: the smooth falsetto vocals of William Kenny are impossible to resist, while the sedate chord progression and backing vocals predate the doo-wop trends of the following decade.

In the throes of the Great Depression, the folk-influenced country music of the 1920s gave way to southern Gospel. That is to say, secular music became sacred, and Christian fundamentalist themes became a major component of the genre. Roy Acuff’s “Great Speckled Bird” fits right in to this trend, but the twangy melodies and metaphorical imagery mange to propel this classic song beyond its conservative messaging.

47. “Need a Little Sugar in My Bowl” by Bessie Smith

Double entendres have been part of music for as long as lyrics have existed. Case in point: Bessie Smith’s down-and-dirty blues song “Need a Little Sugar in My Bowl.” Of course, the innuendo is obvious, but the song’s brilliance relies on Smith’s comedic commitment to the bit. It’s funny, catchy and seductive a whole century later.

46. “Tumbling Tumbleweeds” by The Sons of the Pioneers

While not necessarily as memorable as the 1946 remake that is featured in The Big Lebowski, the original 1934 recording of “Tumbling Tumbleweeds” is a landmark in cowboy country music. Before the lush orchestrations, The Sons of the Pioneers originally opted for a spare, mid-tempo acoustic arrangement, which perfectly mimics the rollicking of the titular diaspore.

Lead Belly is best known as a country blues artist who spent much of his life in and out of prison. This portrait paints him as a one-note musician, which simply wasn’t true. Adept at several genres, Lead Belly was more versatile than often given credit for. For example, “Goodnight, Irene” is a tender folk ballad with a stunning vocal performance. At less than two minutes, the song is over before you know it, yet the haunting melody calls for an immediate replay.

The charging rhythms of the Count Basie big band were one of the signature sounds of the 1930s. Even more important to Basie’s success was the tenor saxophone of Lester Young, whose relaxed style was the perfect counterpoint to the rest of the band’s uptempo approach. Young is obviously the showcase of “Lester Leaps In,” a hard-driving standard filled with plenty of open space for Pres to deliver some of his finest solos.

43. “I’m Gettin’ Sentimental Over You” by Tommy Dorsey

The smooth trombone of Tommy Dorsey leads the way in “I’m Gettin’ Sentimental Over You,” a semi-swinging pop instrumental that remains one of the most romantic songs of the decade. Even though Dorsey’s big band arrangements sometimes favored “foxtrotting” over “swinging,” his gift for sweet melodies are pretty much unparalleled throughout the jazz universe.

“Ten Cents a Dance” hides its humor under a sense of wide-eyed naïvety. Yet from a more modern perspective, the 1930 Ruth Etting rendition becomes tragically sympathetic due to its somewhat autobiographical nature. Nevertheless, Etting’s overall charm and knack for melody makes sure that the popular tune remains immensely catchy nearly 100 years later.

41. “My Rough and Rowdy Ways” by Jimmie Rodgers

Jimmie Rodgers was the first and quite possibly the greatest country music superstar in American history. Yet “My Rough and Rowdy Ways” is a perfect example of why his legacy transcends stylistic boundaries: smooth and easygoing songwriting with a rough edge just beneath the surface. Even though the lyrics find Rodgers settling into simple domesticity, he still “can’t give up [his] rough and rowdy ways.” It’s a fitting proverb for all honky-tonkers and rock ‘n’ rollers to follow.