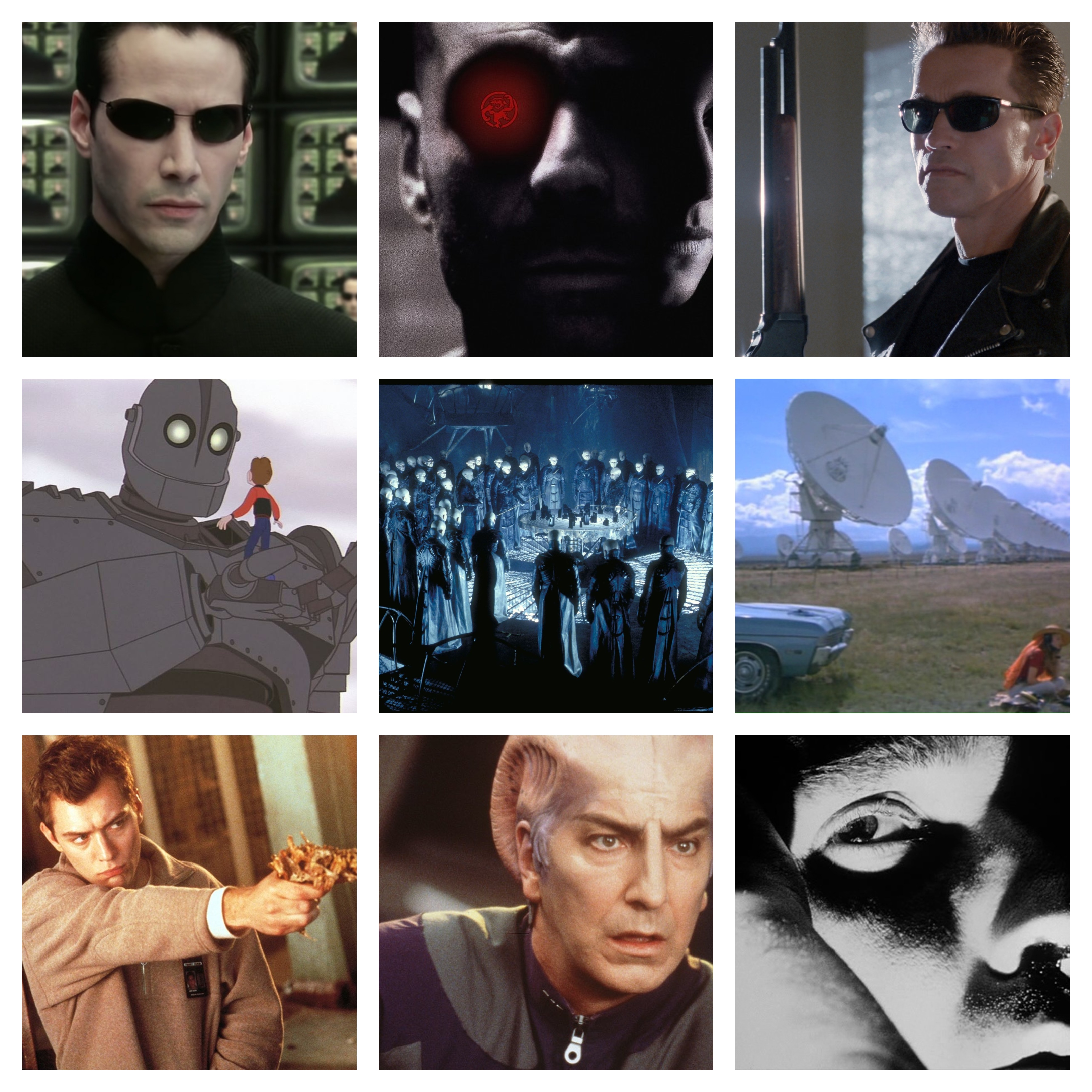 Science fiction is the rare movie genre that develops in real time. As technology and scientific knowledge expands, so too does our ability to imagine what will be possible in the future. It’s no surprise that several of the Top 10 Sci-fi Films of the ‘90s deal with the potential dangers of artificial intelligence and the internet’s role in shaping the world we live in.

As expected, these Top 10 Sci-fi Films of the ‘90s all give the viewer plenty to think about — the type of movies that will stick with you long after you finish watching.

Directed by David Cronenberg, this underrated mind-bender is about a game designer (played by Jennifer Jason Leigh) who is targeted by assassins, and who must enter her own virtual reality video game to test out whether her creation has been compromised. Blurring the lines between fantasy and reality, eXistenZ also blurs the lines between sci-fi, surrealism and the director’s trademark body horror.

Filmed on high-contrast black-and-white and made on an extremely low budget, Pi is a “math-sci-fi” movie that adds up to more than the sum of its parts. The equation carefully balances elements of noir, thriller and surrealism, along with a strong script and sure-handed direction from Darren Aronofsky in his feature debut. Never before has number theory been so exciting.

After a deadly virus nearly wipes out all of humanity and forces the rest to live underground, a group of scientists sends James Cole (played by Bruce Willis) back in time to potentially save the world. Despite the classic sci-fi setup, 12 Monkeys is much more narratively and philosophically complex than initially expected — and features a fantastic conclusion that is tragic in all the right ways.

You can’t have a Top 10 Sci-fi Films of the ‘90s list without including The Matrix. Not only was it one of the first major blockbusters to popularize simulation theory; it also remains one of the most visually stunning films to this day. Yet none of that would mean anything if The Matrix wasn’t so damn fun. Swallow whatever pill you choose and just enjoy the ride.

How often is an Arnold Schwarzenegger movie thought-provoking? Total Recall, in which the Austrian actor plays against his usual macho persona, is probably the lone exception. Of course, the film still contains plenty of action and violence, but it also asks us to question our own memories and sense of identity. Schwarzenegger’s acting abilities (or lack thereof) perfectly play into the ambiguities that surround the film’s complex themes.

Schwarzenegger was beyond perfect as the mindless cyborg villain in the 1984 original, and he’s just as good playing the hero in James Cameron’s 1991 sequel. Terminator 2: Judgment Day successfully tugs on the heartstrings while also delivering plenty of ultraviolent spectacle, yet it’s the former reason that makes the film so iconic.

Sci-fi often takes itself too seriously, which is why Galaxy Quest remains such a breath of fresh air. Both an homage and parody of Star Trek-style tropes, Galaxy Quest is quite possibly the funniest science fiction film ever made. It pokes fun at the genre and its fandom, yet in the process of doing so it becomes a great example of everything that sci-fi does so well.

The Iron Giant resonates with everyone: kids, adults and probably aliens and robots too. Featuring an engrossing storyline and absorbing animation, The Iron Giant makes us laugh, cry and feel what it means to be human in a way that few other movies can, sci-fi or otherwise.

The existence of extraterrestrial life is one of humanity’s biggest questions. Likewise, the question of what that would mean for religion is one of humanity’s biggest issues. Based on the Carl Sagan novel of the same name, Contact is a realistic portrayal of faith vs. science, making for a sci-fi classic that is equal parts accurate and abstract.

No art form fully envelops the senses better than film, a medium which has the power to reach directly into a viewer’s subconscious. That’s why when Dark City asks us to ponder what it means to be human, we can understand the answer even though it is never explicitly stated. All just by watching the movie.

Inspired by German expressionism and Plato’s Allegory of the Cave, Alex Proyas’ Dark City is easily the most thought-provoking sci-fi movie of the 1990s. It is also the most visually stunning, featuring an arresting set design and an unsettling film noir atmosphere. But like the movie itself, words can’t do it justice. Watch Dark City for yourself and see why it’s the best sci-fi film of the decade … and one of the greatest of all time.

Some honorable mentions that didn’t make the cut for the Colin’s Review Top 10 Sci-fi Films of the ’90s include but are not limited to: Gattaca, Star Wars Episode I: The Phantom Menace, Jurassic Park, Starship Troopers and The Fifth Element.