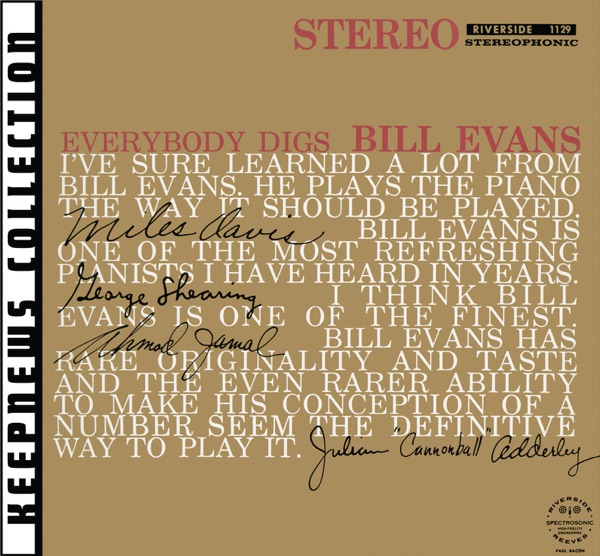 The album cover for Everybody Digs Bill Evans looks like it belongs on the back of a DVD case in a Walmart clearance bin. Instead of artwork, we have four blurbs about Bill Evans. Usually, this would be considered pathetic and pretentious, but because the quotes are from Miles Davis, George Shearing, Ahmad Jamal and Cannonball Adderley, the strategy pays off.

“I’ve sure learned a lot from Bill Evans. He plays the piano the way it should be played.”

As Miles Davis began to experiment with modal jazz, he became increasingly obsessed with the piano stylings of Bill Evans. Davis, who had already experimented with classical forms on Miles Ahead, viewed Evans’ expressive use of block chords to be the perfect synthesis of jazz and classical.

Evans’ one-of-a-kind ability owed as much to Oscar Peterson as to Claude Debussy and Erik Satie. Nowhere is this more evident than on the solo “Peace Piece,” a meditative modal masterpiece that formed the basis for “Flamenco Sketches.” The solemn ostinato plays like a response to Charles Ives’ “The Unanswered Question.”

“Bill Evans is one of the most refreshing pianists I have heard in years.”

George Shearing has a point — Evans’ impressionistic style was unlike anything else in jazz. His playing is elegant, lush, and deceptively spare. On top of that, he has an absolute mastery over the foot pedals.

“I think Bill Evans is one of the finest.”

Ahmad Jamal was an early innovator of modal jazz, and his literal one-note style was a big influence on both Evans and Davis. However, Jamal was never able to capture the emotional depth heard on Everybody Digs Bill Evans. The album possesses a timeless quality.

“Bill Evans has rare originality and taste and the even rarer ability to make his conception of a number seem the definitive way to play it.”

Of the LP’s nine songs, there are only two Bill Evans originals (including the 40-second “Epilogue”). The rest are popular standards beautifully remade in Evans’ image. He takes full ownership of everything from “Lucky to Be Me” to “Oleo.”

Evans’ music is as elegant as Cannonball Adderley’s blurb, whose keen and well-worded observation shows he would’ve been a damn fine music critic. The heaps of praise prove that the seminal Everybody Digs Bill Evans is a landmark album in jazz history.