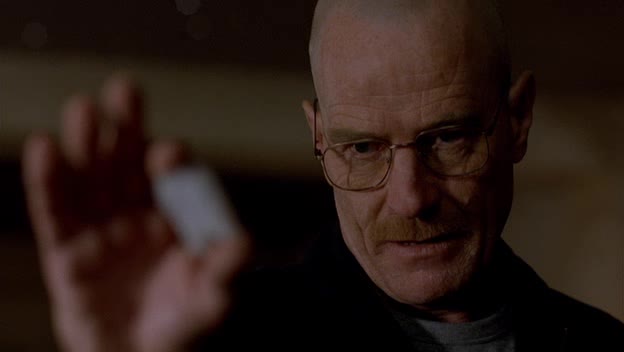 If Breaking Bad isn’t the greatest TV show of all time, it’s definitely the most entertaining. However, when it comes to ranking the series piece by piece, season one sometimes gets lost in the shuffle. At only half the length of your typical Breaking Bad season, the first installment isn’t necessarily unfinished, but it is somewhat inconclusive.

Likewise, “Crazy Handful of Nothin’” doesn’t feel like a penultimate episode. In fact, Breaking Bad is just getting started. As great as the first six episodes have been, It’s hard to believe that season one is almost over.

Directed by Bronwen Hughes, “Crazy Handful of Nothin’” is a very busy installment. A lot of action is packed into the tight 48-minute running time. Unceasingly, we touch base on all major aspects of the series so far — Walt’s cancer diagnosis, the effect it has on his immediate family members, Hank’s investigation into the Albuquerque drug trade, and Walt and Jesse’s crystal meth partnership. There’s almost too much going on, but the deft pacing and sharp dialogue keep the episode in check.

As always, the acting in Breaking Bad is top-notch. Bryan Cranston and Aaron Paul rightfully garner most of the accolades, but every member of the ensemble plays their role to perfection, from Charles Barker as Skinny Pete to Raymond Cruz as Tuco Salamanca. The chemistry is perfect.

Speaking of Tuco Salamanca, he is introduced this episode as Breaking Bad’s first major villain (once again, this does not feel like a penultimate episode). Now that Walt and Jesse are cooking meth again, they’re going to need a drug lord distributor if they really want to make bank. That’s where Tuco fits in.

However, he’s even more crazy than Krazy-8. Case in point: at a business meeting, Tuco beats Jesse senseless with a bag of money and then steals a pound of meth from his unconscious body. He’s the loosest cannon since Richie Aprile.

As seen in “Cancer Man,” Breaking Bad excels in quiet moments of introspection. However, everyone knows that Breaking Bad is at its best when it delivers explosive, suspenseful action. Literally.

To get revenge for Jesse, Walt blows up Tuco’s headquarters with fulminated mercury, takes the money he is owed and then lets out a primal roar of masculine aggression once he gets back to his car. The episode ends, Heisenberg is born and now Breaking Bad can truly begin.

It’s a powerful climax, to say the least. But it’s only a taste of the greatness to come. We’ve now seen what a pinch of mercury fulminate is capable of. How potent is the entire bag?

-Walt christens himself Heisenberg in honor of the Nobel Prize-winning German theoretical physicist, Werner Heisenberg. The original Heisenberg was the chief scientist behind Germany’s nuclear weapons program in World War II, where he specialized in quantum mechanics. The modern-day Heisenberg is a crystal meth manufacturer in Albuquerque, where he specializes in chemistry. Same thing, really.

-The reason Walt is able to blow up Tuco’s headquarters and walk away with $50,000 unscathed is because he has a superior product. Tuco agrees to pay Walt $70,000 a week for his top-notch crystal meth. Metaphor for the evils of capitalism? Possibly.

-Jesse deduces that Walt has cancer after observing a radiation burn on his chest. He confesses that he lost his aunt to lung cancer.

-Poor Jesse. This is already the second time he’s gotten the shit kicked out of him.

-The only subplot that I didn’t quite buy was Hank’s investigation into the chemistry lab at Walt’s high school. Along with the gas mask being traced back to the science department, the evidence against Walt is pretty overwhelming. It should at least be enough to provide some degree of suspicion. Luckily, a janitor with a criminal record ends up taking the fall. It’s pretty amazing that Walt operates right under Hank’s nose for five whole seasons.

-The episode title gets its name from a family poker night in which Walt bluffs the shit out of Hank (!) with, as Marie puts it, a “crazy handful of nothing.” Aside from also being a direct quote from the 1967 classic Cool Hand Luke, it also foreshadows Walt’s mercury fulminate gambit.

“Let me get this straight: I steal your dope, I beat the piss out of your mule boy, and then you walk in here and bring me more meth? That’s a brilliant plan, ese.”

“You got one part of that wrong. This is not meth.”