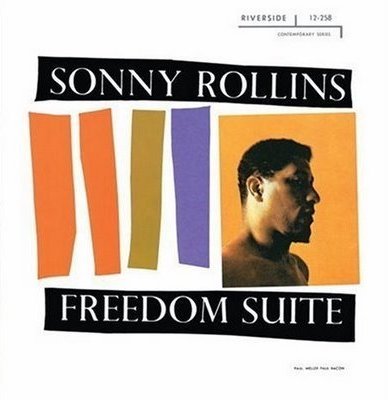 Sonny Rollins was at the peak of his powers in 1958. That being said, Freedom Suite is one of his rare “classic” albums that I could take or leave. This is his third LP performing with a trio, but it’s the first time that the lack of variation equates to a lack of imagination.

The 19-minute title suite ambles on and on without saying much. Truth be told, it’s a run-of-the-mill hard bop tune stretched far beyond its breaking point. Rollins’ previous experiment with epic length — the 27-minute Charlie Parker medley from Rollins Plays for Bird — also suffered from a lack of direction. Extended suites were probably the only form that Rollins never completely mastered.

The four remaining songs are an obscure selection of non-standards. Collectively, they’re far better than the “Freedom Suite,” but they aren’t very memorable taken by themselves. All in all, it’s one of Sonny Rollins’ rare missteps — which means that it only gets a measly B+