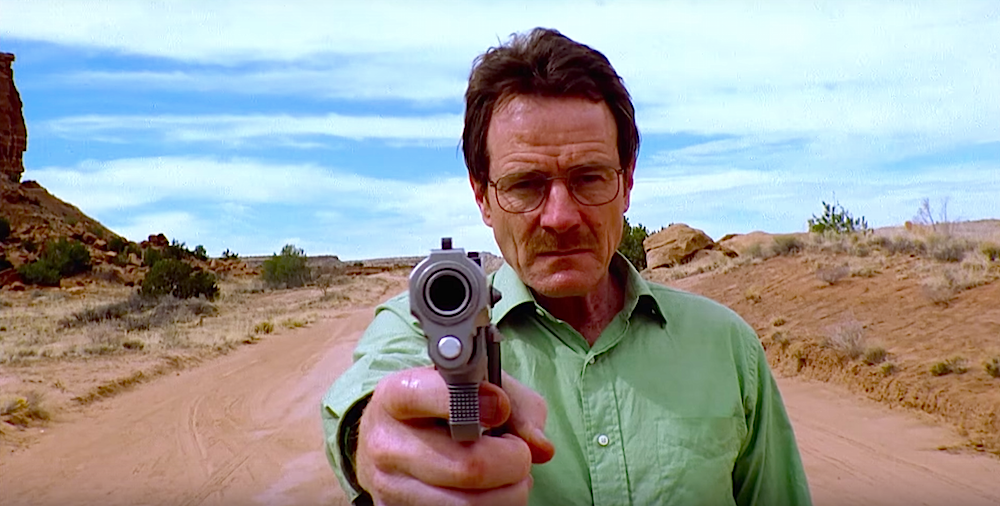 “The Chemistry of Crystal Meth”

The first thing we see is the barren desert of backwoods New Mexico. It’s peaceful. Soon, an RV comes screaming down a dusty road, with the sound of blaring sirens in the distance. The frantic driver is wearing only tighty-whities and a gas mask. His three traveling companions are either dead or unconscious.

After crashing the RV into a ditch, the driver — an ordinary-looking guy played by Malcolm in the Middle’s Bryan Cranston — grabs a gun and a video camera, makes a tearful confession to his wife and kids, and then awaits the oncoming sirens with his pistol drawn.

It’s a thrilling sequence. It also happens pre-credits. Has any television show started with a bigger bang than the first five-minutes of Breaking Bad? Off the top of my head, I can’t think of another series that hooked me this quick.

The rest of the pilot takes place a few days earlier, showing us the unlikely circumstances that led to the desert shootout. And, after getting our first glimpse of Walter White’s day-to-day life, it’s hard to believe that’s where he ended up.

Every aspect of Walt’s life is unremarkable. He just turned 50. His son has cerebral palsy. His wife gives the worst handjobs of all time. He’s a high-school chemistry teacher that also works at a car wash. And, worst of all, he’s just been diagnosed with terminal lung cancer. Two years to live, at best.

But instead of wallowing in self-pity, Walt decides that it’s finally time to start living. He goes on a ride along with his brother-in-law, Hank, a DEA agent, and watches as the cops bust a meth lab run by one of his former students, Jesse Pinkman, who narrowly escapes out the back window. This gives Walt the bright idea to start a crystal meth enterprise of his own. If he’s going to die anyways, why not go out on his own terms, and make a ton of money for his family in the process?

The next day, Walt tracks down Jesse, and makes him an offer he can’t refuse. Together, they become crystal meth business partners. With Jesse’s street smarts, or lack thereof, and Walt’s profound knowledge of chemistry, they can produce a high-quality product that will drive all other competitors out of the market.

This is more or less how they end up in a crashed RV with two dead Mexicans in the middle of the desert. But because this is a pilot, Walt should know that the main character is never in grave danger. That’s why the sirens he hears turn out to be firetrucks. And the gun he points directly at the audience is never fired.

Likewise, the gun he pulls on himself doesn’t have a bullet in the chamber.

Breaking Bad has tremendous action, that goes without saying. No other TV show, save for Game of Thrones, can reach such explosive highs. But what separates Breaking Bad from its contemporaries is the emotional depth that it conveys from scene to scene. This is in large part due to the acting.

Series creator Vince Gilligan deserves all the credit in the world, but the truth is that Breaking Bad wouldn’t exist without Bryan Cranston. No other TV actor, save for James Gandolfini as Tony Soprano, has dug so deep into his character. Cranston’s portrayal of Walter White is as addictive as the crystal meth he cooks.

With all due respect, no one could have possibly seen this performance forthcoming. Cranston’s previous roles, as Hal on Malcolm in the Middle and Dr. Tim Whatley on Seinfeld, showed him to be a great comedic supporting actor. But nothing had indicated that he was ready to make such a serious dramatic transition.

Together with Vince Gilligan, Cranston helped create an American masterpiece.

As a pilot episode, “Breaking Bad” is one of the best in TV history. Everything that the series represents is on display in this opening hour, from questions of morality to the importance of family.

Even though Breaking Bad’s first season was shortened to seven episodes due to the 2008 Writers Strike, it is still an essential aspect of the show’s enduring legacy. The pilot starts the series at an unbelievable peak. But the real greatness is Breaking Bad’s ability to sustain such excitement.

It’s probably the most consistent TV show of all time.

-Let it be known that Walter White did attempt to kill himself in the pilot. That’s important to remember moving forward. He truly hates himself, even at this early stage in the series.

-Vince Gilligan said this about creating a TV show: “Television is historically good at keeping its characters in a self-imposed stasis so that shows can go on for years or even decades. When I realized this, the logical next step was to think, how can I do a show in which the fundamental drive is toward change?”

-Flashes of Heisenberg: “Fuck you! And your eyebrows!” Also, using a phosphine explosion to kill two angry Mexicans.

-The character of Jesse may initially come off as annoying, but he is the perfect counterpoint to Walter White’s at-times insufferable rationality. Actor Aaron Paul deserves just as much credit as Cranston.

-Walter’s wife, Skyler, is one of the most hated female characters in all of TV fandom. That’s actually a compliment. Actress Anna Gunn knows how to give her the right amount of bitchiness and congeniality.

-Likewise, Walter Jr. is one of the most hated TV sons, joining AJ Soprano and Bobby Draper. Nevertheless, you love to see his dad sticking up for him, as when Walt beats the shit out of a school bully in the middle of a department store.

-The pilot still has its missteps; it isn’t “perfect.” There’s a lot more nudity and profanity, which isn’t a bad thing necessarily, but it feels out of place with the rest of the show. Also, Hank is kind of a huge asshole.

-The ending, featuring Walt having rough sex with Skyler, isn’t on par with your typical Breaking Bad conclusion, either.

“There are… there are going to be some things, things that you’ll come to learn about me in the next few days. I just want you to know that, no matter how it may look, I only had you in my heart. Goodbye.”