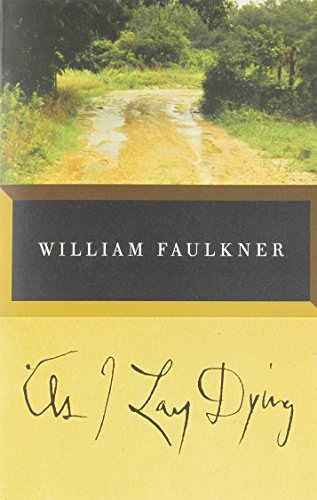 Surely, this review of a 1930 American novel is an exercise of futility — what hasn’t been already said about William Faulkner? — but, nevertheless, here is a short, capsule review of As I Lay Dying, one of the greatest books I’ve ever read.

As I Lay Dying, William Faulkner’s masterpiece, ends suddenly and somewhat ironically, a collapse of both moral and narrative values. The final line — “Meet Mrs Bundren” — is the novel’s only ironic twist, delivered like a bolt of lightning, a slap in the face. Faulkner places us so deep into these characters’ collective subconscious that by the time the end rolls around, we are completely blindsided by their now-apparent selfishness, stupidity and insanity. It’s a bleak note to close on.

But Faulkner is a stylist through and through, perhaps the greatest poem’n’prose practitioner that this country has ever seen. By way of short episodic chapters, Faulkner’s artistry is boiled down into its raw essentials — sublime, humanistic passages that are profound without any pretension, aided by a Southern dialect that provides pathos, realism and relatability.

The novel shifts POVs rapidly, from chapter to chapter. One of the most famous (and funniest) sections is but a single sentence: “My mother is a fish.” The stream-of-consciousness approach is engrossing — As I Lay Dying is a collection of monologues woven together so skillfully that it becomes a living, breathing recollection; our eyes are their eyes, their words ours.

In fact, Faulkner’s authorial voice is practically hidden, so strong is the first-person characterization. His stand-in-by-default is Darl, second-eldest Bundren son and most articulate of the bunch, who narrates 19 of the 55 chapters. Yet however intricate his words may be, his account is actually the most unreliable.

The bulk of the story concerns itself with the death of matriarch Addie Bundren (which occurs early in the novel) and her family’s trek from Mississippi to Missouri to bury her corpse. Over time, through use of language, the Bundren clan’s journey takes on a mythical quality. Family history and biblical motifs are the building blocks for this multi-perspectival modern epic, which accomplishes nothing short of encapsulating the entirety of human existence in only 250+ pages. Without a doubt, one of the greatest books of the 20th century.

333-word book reviews: “As I Lay Dying” by William Faulkner