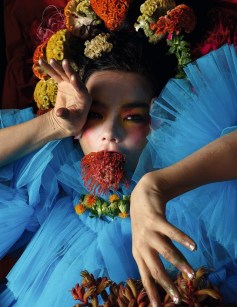 Here’s a tape that’ll bite your ass, but after a while it starts to feel good.  It turns into a tender nibble.  That’s because, by Björk standards, her latest album, Utopia, is a cheerful change of pace.  Or should I say—by 2010s Björk standards? The third decade of the Icelandic chanteuse’s career has taken on quite an avant-garde approach—all glitchy electronics, ambient ‘scapes and the usual, powerful, otherworldly vocals.  Where her previous LP (Vulnicura, 2015) was a painful drone-based break-up record, Utopia finds Björk learning to love again.  And all the better for it.

The opener, “Arisen My Senses,” is her most immediate song in years, with a chord progression that reminds me of the piano line from Drake’s “Over My Dead Body.”  You could even dance to it, intelligently.  Love is in the air, but the air is very cold—velkomin á Íslandi.

Björk delivers these songs in her incomparably icy sprechgesang, though it’s not as atonally expressionistic as Vulnicura or 2011’s hollow Biophilia.  When she lowers her tone, her voice is warm and comforting—love-making.  When she’s in angelic falsetto-mode, the songs turn liquid—climaxing.   And when she flails about over electro-orchestro crescendos, we get a sensuous slap in the face.  The usual Björk, in other words.

The words, typical, enigmatic as ever.  Minimal lines of stream-of-consciousness poetry—phrases, declarations, threats, praises, seductions.  Of course, it’s not all about the words.  The real balladry is in the accents, the breaths, the flutters.  “Features Creatures” is perhaps the most eerie-sounding love song ever.

“Saint,” track 13 of 14, is another flirting-with-pop masterpiece.  The drums are boom-boom-boom rather than glitch-glitchh-gli, and the melodies are the prettiest on the album.  Don’t know whether to sing along, whistle or hum, or just let it all wash over me.

The production (once again by Björk and South American up-and-comer Arca) is fantastic—a continuation, or an evolution, of the avant-ambience of Vulnicura, but in a more welcoming context.  The current decade of Björk music has often blurred the line between electronic and classical.  The occasional glitchy backbeats remind us of her UK house obsessions, but the choirs, flutes and all variations of faux-plucked strings call attention to a holy-minimalist aesthetic.  There is a song called “Tabula Rasa,” after all, though Björk may be more concerned with the philosophy behind the term rather than the Avro Pärt double-concerto.

The best is when the bottom of a song is pulled away completely, and we are left to float in a disruption of time and space, as on the show-stopper, “The Gate.”  Ambient sounds (chirping, animal noises, rustling in the bush) hang out in the background throughout the entire album, but to no better effect than in “The Gate.”  Swells and silences build upon each other, until all we know is that Björk “can care for you/care for you/care for you.”

This is a long album—over 70 minutes—and it took me several listens to penetrate.  Utopia is Björk back at the top of her game, a worthy successor to Vulnicura.  There are still plenty of places her career can take us, and she’s still burgeoning just as bright as she was 20 years ago.  With Utopia, she also stakes her claim as the top export of challenging, experimental music in the world right now.  She could be a pop superstar if she wanted, but she has so much more to offer as a leftist aesthete.

Keep listening, and it’s hard to stop.  Utopia stands among the best music Björk has ever released, obviously one of the most interesting albums of the year.  It’s almost a new way of sounding happy.  Iceland, you beautiful sonofabitch, you’ve done it again.

*Photos from Dazed and highsnobiety.com

One thought on “Utopia – Björk”