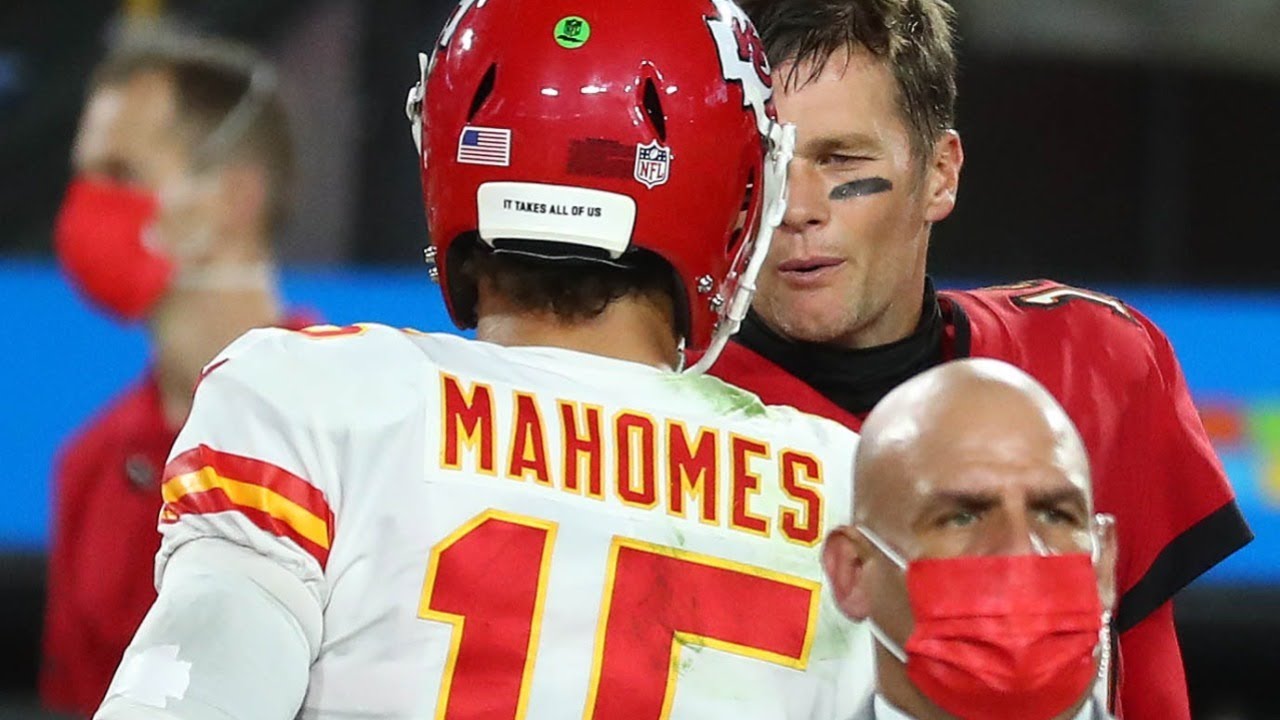 The Super Bowl LV matchup between the Tampa Bay Buccaneers and the Kansas City Chiefs was billed as a matchup between the two greatest quarterbacks the game has ever produced. This was a once-in-a-lifetime moment — at no other stage in football’s history has there ever been a game with more legacy-defining significance.

Or is that just recency bias talking? Narratives in sports are pushed just as hard by the media as narratives in politics. After three years of hearing how Patrick Lavon Mahomes II was the baby G.O.A.T., the greatest thing since sliced bread and the second coming of Jesus Christ all rolled into one, it became hard to object. After all, we’ve never seen anything quite like him — an unparalleled blend of athletic ability, cerebral talent and revolutionary playmaking. Then again, the praise — while warranted — was a little premature. The kid’s still 25-years-old, you know. This is only his fourth season in the NFL.

Mahomes’ meteoric rise has been faster than any other player in NFL history. Heading into Super Bowl 55, many analysts viewed Tom Brady as his only peer. This means that, in the eyes of many, Mahomes had already skipped over several all-time legends. There haven’t been any debates on whether Mahomes is better than Peyton Manning, Aaron Rodgers or Joe Montana. He ascended straight to the Brady-or-bust echelon. There was never a grace period of any kind.

That’s because, well, Mahomes is that good. Check out this throw. Or this throw. This one, too. His first full-season as a starter (his second year in the league), he won MVP, threw for 5,097 yards and became only the third quarterback ever to surpass 50 passing touchdowns. The Chiefs went 12-4, and lost in overtime in the AFC Championship game to … well … hold that thought.

His follow-up was even better: the Chiefs once again went 12-4, nabbed the AFC’s top seed and overcame a double-digit deficit in every single playoff game en route to winning Super Bowl LIV over the San Francisco 49ers. Mahomes was named MVP, and his status as a living legend was already secured.

And then the Chiefs got even better in 2020. Kansas City only lost once in games that Mahomes started. Aside from a brief concussion scare against Cleveland (go Browns, by the way), the Chiefs rolled through the AFC playoffs, and made it to their second consecutive Super Bowl, where they subsequently … well … hold that thought.

By turning Super Bowl LV into a matchup based on ultimatums, the sports media world has essentially defeated themselves

The point is, being the “best” and being the “greatest” are not necessarily the same thing. Just look at Tom Brady’s career trajectory, and his unlikely path to undisputed G.O.A.T., though “undisputed” has hardly been the best adjective to describe it.

Brady won his first ten playoff games, including three Super Bowls. That’s unprecedented. He had the best start to a career ever, but that didn’t automatically vault him into G.O.A.T. discussion. He was still living in the shadow of his idol, Joe Montana. You could probably place Brady in the same category as Dan Marino, Roger Staubach and John Elway, but that’s it. He spent the next ten years of his career trying to separate himself from Peyton Manning, and then Aaron Rodgers the five years after that. The Super Bowls piled up, and it’s clear that Brady surpassed everyone, but the debates still raged on. Maybe people just needed something to talk about.

That’s because, Tom Brady never had the inherent athletic ability of Mahomes or Rodgers. He never put up the eye-popping stats of Peyton. He also had the greatest coach in NFL history on his sideline. Brady was lucky, clutch when it counted and he may have cheated, but he never possessed otherworldly aptitude — the insane, highlight reel plays that Mahomes makes every game were never a staple of Brady’s strategic, calculated approach.

Still, through longevity and sheer determination, Brady became the G.O.A.T.

Six Super Bowl championships, several all-time passing records and an untrainable hunger for success are all facts that can’t be ignored. He surpassed his peers by beating them head-to-head, and he conquered the legends that came before by earning the accolades they never did. He even bested himself by leaving Bill Belichick and the New England Patriot way, and taking the upstart Tampa Bay Buccaneers to a Super Bowl in just his first season. At the ripe old age of 43, no less.

He only had one last test standing in his way.

It’s like if Jordan played LeBron in the NBA Finals. Or if Babe Ruth met Willie Mays in the World Series. The timelines had to be perfect. These types of matchups only happen in barroom sports debates, never in the real world.

It’s nearly impossible to debate G.O.A.T.s of different eras, simply for the fact that they’ve never played each other head-to-head. How can you equate Michael Jordan and LeBron James when their styles of basketball — and the eras they played in —  are so unequivocally different?

Until Super Bowl 55, that was going to be the ultimate fate of the Brady-Mahomes debate. Mahomes has already changed the way football is played, and he’ll continue to do so for the rest of his career. He’s on pace to break every record imaginable, probably win several more Super Bowls and set the standard by which all future players are judged. When Brady retires (although that’s becoming more “if” than “when”), new sports media and new sports fandom collectively forget about his accomplishments. The generation that grows up on Mahomes will declare their G.O.A.T. to be the G.O.A.T. Brady will be to Mahomes what Montana was to Brady.

But then a funny thing happened. Brady and Mahomes met in the Super Bowl — an unlikely scenario considering a 43-year-old Brady had to move to the NFC, lead Tampa all the way and happen to come across the Chiefs.

It’s like if Jordan played LeBron in the NBA Finals. Or if Babe Ruth met Willie Mays in the World Series. The timelines had to be perfect. These types of matchups only happen in barroom sports debates, never in the real world.

And here’s where the curse of the media may prove to be Mahomes’ ultimate victim. Obviously, he has the talent to become one of the greatest players the sport has ever seen, but by turning Super Bowl LV into a matchup based on ultimatums— “If Mahomes wins, then he can and will surpass Brady” and “If Brady wins, then he is the undisputed Greatest forever”—the sports media world has essentially defeated themselves. The latter ultimatum came true, and Brady is the best, end of story.

The quest of every athlete is to become the greatest they can be, and that means striving to become the greatest ever. After last night’s 31-9 drubbing, in which Mahomes made several impressive plays yet ultimately suffered the worst defeat of his career (you can almost make the case that Mahomes actually played bad), Patrick Mahomes will NEVER be able to surpass Tom Brady, no matter what.

And he knows it.

One G.O.A.T. came out on top in an unprecedented matchup, and the other will have to live in the shadow of that result forever.

Of course, Mahomes won’t consciously think he can’t become the greatest, because … well … he still potentially could — just beat Brady in next year’s Super Bowl, and we’re back to square one (which we shouldn’t have even been at in the first place). But the odds of that happening—the chances of both teams meeting again, first of all—are very slim.

For now, Brady and Mahomes have to meet in the Super Bowl. It’s the only way to settle their score. Brady has now beaten Mahomes twice in the playoffs, and these are the only two losses that Mahomes has ever suffered in the postseason.

Sure, others will beat him in the playoffs, and new rivalries will be forged, but Mahomes is now running a race that he can’t win. How will that knowledge affect his career trajectory? It’ll be interesting to watch over the next couple decades. As I said before, every athlete aspires to be the greatest, but to know that you can never become the greatest is an even bigger curse.

Had the Chiefs beaten the Bucs in last night’s Super Bowl, the discussion would’ve been much different. The debate would be much closer, perhaps even leaning somewhat toward Mahomes’ favor. But because the result ended up the other way, Tom goes down as the undisputed Greatest of All Time, and Mahomes will never be able to catch him. The kid’s only 25-years-old, by the way.

Sure, there are plenty of reasons that aren’t Mahomes’ fault for last night’s loss — the porous offensive line that couldn’t block, the receivers that couldn’t catch, the coaches that couldn’t adjust and the defense that shot itself in the foot — but the onus of the argument is that one G.O.A.T. came out on top in an unprecedented matchup, and the other will have to live in the shadow of that result forever.

Even though Brady’s victory was made somewhat easy thanks to one of the best defensive line performances in Super Bowl history, he has now transcended G.O.A.T. debates within his own sport. He’s up there now with Michael Jordan, Wayne Gretzky, Babe Ruth, Muhammad Ali, Serena Williams, Usain Bolt and Michael Phelps. He’ll be an American sports legend for hundreds of years, having conquered every foe and benchmark and expectation thrown his way.

As for Mahomes, the G.O.A.T. talk has taken a major setback. Brady is now untouchable. Let’s start with passing Peyton, Rodgers and Montana first, and then go from there.