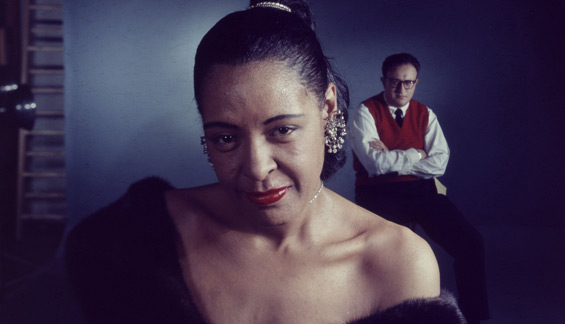 Misterioso captures the Thelonious Monk Quartet’s legendary 8/7/58 performance at the Five Spot Café, which represents the culmination of Monk’s cult status. Unexpectedly, the show is stolen — for five minutes, at least — by tenor saxophonist Johnny Griffin. His iconic solo at the beginning of “In Walked Bud” is, without a doubt, one of the finest moments in jazz history. Continue reading…

By 1958, Miles Davis’ songwriting had reached new levels of creativity. Not only is the title track one of the greatest songs in jazz history; the album that bears its name is some of the hardest rocking hard bop that the legendary trumpeter ever recorded. Milestones is a must-have. Continue reading…

8. A Night at the Village Vanguard

On November 3, 1957 at New York City’s most legendary jazz club, Sonny Rollins took a dive in the deep end. Backed only by bassist Wilbur Ware and a young Elvin Jones on drums, the spare format allowed Rollins the opportunity to explore the very limits of harmonic convention. Never before or since had jazz been so relentless, so elemental, so powerful. He pushed the genre past its breaking point. Continue reading…

This posthumous collection — commonly available as The Tatum Group Masterpieces, Volume Eight — is Art Tatum at his most accessible. Ben Webster provides a steady anchor with his casual, melodic saxophone; meanwhile, Tatum strides away on piano, playing at least nine or ten notes to every one of Webster’s. This unlikely combo works wonders — a slow foreground mixing perfectly with a non-stop commentary in the background. In fact, Tatum has very little regard for what’s going on around him. He just keeps soloing and soloing as if the rest of the quartet isn’t even there. Credit to producer Norman Granz for somehow making it work. Continue reading…

“Bo Diddley” the song is one of the most influential singles in rock and roll history, especially when paired with its legendary B-side, “I’m a Man,” both of which sound fresh even today. Likewise, Bo Diddley the album is a landmark collection of raw R&B powered by the influential Bo Diddley beat, a chugging 3/2 clave rhythm that features fuzz guitar and maracas. Meanwhile, Bo Diddley the musician is less of a man and more of a myth. Self-obsessed to the point of self-parody, he remains the model persona for every rock star that followed. Continue reading…

Miles Davis composed the title track, chose the material and was the featured soloist on Cannonball Adderley’s Somethin’ Else. Some jazz fans listen to this album as Davis’ warm-up for Kind of Blue. But to overlook Adderley’s stellar contributions as alto saxophonist and bandleader would be downright ignorant.

Together, Adderley and Davis craft an understated masterpiece that bristles with impeccable chemistry. And even though the two horn players are mighty impressive, the interlocking groove of the rhythm section (Art Blakey on drums, Sam Jones on bass and Hank Jones on piano) is the engine that really drives the record. Continue reading…

4. Frank Sinatra Sings for Only the Lonely

When asked if he had a favorite album among his own recordings, Frank Sinatra quickly answered with Only the Lonely. It’s easy to see why. Created during a particularly turbulent period of his life — the disintegration of a toxic marriage to Ava Gardner — the LP is brooding, emotional, passionate, introspective, stoned, intense and vulnerable in a manner that goes unmatched throughout Sinatra’s career. It’s not only his most committed performance; it’s also his most autobiographical. Continue reading…

By 1958, Count Basie’s popularity had waned quite a bit. His live performances were still electric, and his tours still successful, but the big-band genre he practically invented had long ago been passed over by bebop and its modernist variants. Basie was past his prime. Or so everyone thought.

At 53-years-old, The Atomic Mr. Basie marks the zenith of the Count’s creative exploration. Not only does it swing; it rocks. Basie’s entire career culminates with the 4-minutes-50-seconds that make up “Lil Darlin” — one of the most satisfying finales of the decade. Continue reading…

Lady in Satin is one of the most genuinely heartbreaking albums ever released. It’s beautiful, tragic, unrestrained and emotionally mesmerizing. On her final masterpiece, Billie Holiday plumbs the depths of human emotion to reveal an authentic depiction of female struggle. Something that must be heard to be believed. Continue reading…

Quite frankly, I’m still amazed that Buddy Holly’s self-titled 1958 LP isn’t more widely recognized for what it truly is: the best album of the early rock and roll era.

Holly’s career has been shrouded in myth ever since the day the music died — Holly the persona is legendary, but for some reason Buddy Holly the album isn’t. Nevertheless, the LP contains more charisma than Elvis Presley, more songcraft than Chuck Berry, more rhythm than Bo Diddley, and more emotional nuance than all three combined.

Throughout 12 songs and 24 minutes, Holly shows remarkable growth from his 1957 Crickets debut. The songwriting and the vocals and, especially, the musicianship have matured by leaps and bounds. This is most obvious in the greatest song of the decade: the celesta-tinged “Everyday.” Nostalgic, hopeful, tender, melancholy, subdued, lovelorn — Holly encapsulates the dreams and desires of an entire American epoch in only two-minutes and nine seconds. Continue reading…