“For as long as I could remember, I always wanted to be a gangster…” 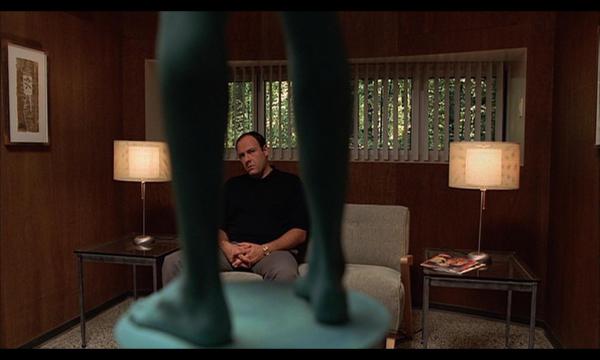 Above is the famous opening shot of The Sopranos, which just may be the greatest show in TV history.  Tony Soprano framed between the legs of the statue in Melfi’s waiting room.  In season five, she’ll mention that therapy is like giving birth.  “No,” Tony will reply.  “It’s like taking a shit.”  He’s hesitant to be there, the camera zooming in on his face, intercut with close-up shots of the statue.  Melfi opens her office door.  “Tony Soprano?”  He enters.

The Sopranos changed everything about television, turning the very medium itself into an art form.  Emotional and psychological themes had never been so prevalent in a scripted TV drama; the gritty realism had never been so thoroughly executed.  The writing, the dialogue, the acting, etc. all started an artistic revolution.  Precursors like Oz, Buffy The Vampire Slayer, Hill Street Blues, and, most notably, the David Lynch-helmed Twin Peaks had previously paved the way for the standard TV drama to become something more, but The Sopranos truly opened wide the floodgates and is responsible for everything we see today.  Without The Sopranos there is no life on Earth as we know it.

I won’t bore you with retellings of The Sopranos’ great feats.  We’re here to discuss the pilot episode.  It is one of only two episodes directed by series creator David Chase (the other being the series finale eight years later) and, quite honestly, he was responsible for some of the finest directing on the show.  The Sopranos would implore a large stable of great directors, like Tim Van Patten, Alan Taylor, Peter Bogdonavich, among others, but the direction in the pilot and “Made in America” really stand out (and I’m not just talking about the series’ infamous final scene).  Already, we have a visual flair and feel that is more akin to cinema than TV shows.  The writing and acting would turn out to be better than most films.  But we’re not there just yet…

The kicking off point for the entire series is Tony Soprano’s panic attack.  That’s how he ends up in the waiting room to see a shrink.  Some of the pilot is told via flashback, and flashback/voiceover are devices that The Sopranos will rarely turn to ever again.  As far as pilots go, however, they are necessary tools to introduce us to the world and viewpoints of this show.

We see Tony’s daily routine: he’s a loving family man with a wife and two kids that doubles down as a waste management consultant, er, mob boss.  He also shows a loving affection for the family of ducks that’s taken up living in his swimming pool.  His family is not all too interested in the water birds, but Tony can’t bear the sight of seeing them fly away.  He passes out.

The psychiatrist Dr. Jennifer Melfi, played by Lorraine Bracco, will develop into an important character in her own right, but for now she is just a way for Tony to give some details about himself/the show to come.  She’ll come a long way from the simple pilot plot device she plays here, but let’s not get too far ahead just yet.

Basically every character shown in this first hour is only just a microcosm of what they will become, even Tony.  David Chase and the rest of the writers were still finding their voices, and the actors had yet to grow into their roles.

“The Sopranos” bears the unmistakable influence of Goodfellas and, to a lesser extent, The Godfather.  At the time, it probably seemed like the originality and greatness of Scorsese’s gangster classics (I include Casino) had essentially ended all hopes to ever craft an original mob story again. The early Sopranos episodes are heavily indebted to Goodfellas, the pilot owing the most.  Forget that Lorraine Bracco starred in Goodfellas, how about all those old ‘50s/’60s songs on the soundtrack that immediately call to mind the adventures of the adolescent Henry Hill?  Or the quick back-and-forth editing during Mafioso conversations a la Scorsese?  A lot of the violence and mob stuff in the pilot is a little cartoonish and over-the-top, like when Tony chases a guy who owes him money through a crowded park in his SUV (of course, accompanied by Dion & The Belmonts’ 1958 hit “I Wonder Why”).  There is a scene where the friendly priest, Father Antintolla (who will be recast), is actually talking aloud about Goodfellas and The Godfather I and II, as if the show is openly acknowledging its influences.  Luckily for us, The Sopranos would shed these gangster forebears and step into its own very soon.

As mentioned before, the characters are only cardboard cutouts of what they will quickly become down the line.  James Gandolfini will end up delivering the greatest performance in TV history as Tony, but he’s nowhere near that level yet.  His thick Jersey accent has yet to be implored and some of his lines fall a bit flat.  In nearly any other episode, everything Tony says will be pure gold.

Carmela is your typical privileged New Jersey housewife, for now.  Basically until “College” (episode five of the season), she will just be nagging and annoying. Her dinner date with Tony is almost cringeworthy in the way she acts.  Her strained relationship with her bratty teenage daughter Meadow is already in place, though, and it’s in these familial hardships where Edie Falco will shine.

Two actors who pretty much have their characters down already are Michael Imperioli and Nancy Marchand.  Imperioli plays Tony’s young hotheaded nephew Christopher.  The way he talks, his stubbornness and humor: this is basically the Christopher we see in the rest of the series.  Marchand plays Tony’s mother Livia and her take on the confused nihilistic ole granny will be a highlight of season one.

If the acting and the dialogue weren’t quite there yet, the main themes of the show are all in place.  Tony says it to Melfi in his first voiceover: “It’s good to be in something from the ground floor.  I came too late for that and I know.  But lately, I’m getting the feeling that I came in at the end.  The best is over.”  Tony is in love with the idea of the past.  He shows great admiration for his Uncle Corrado “Junior” Soprano and speaks in reverence about his father.  He takes his daughter Meadow to an old cathedral that his great-grandfather helped build, a standing monument to the old ways now gone.  Those were the good days, but now they’re over and the people that are left have to adapt to the changing times. 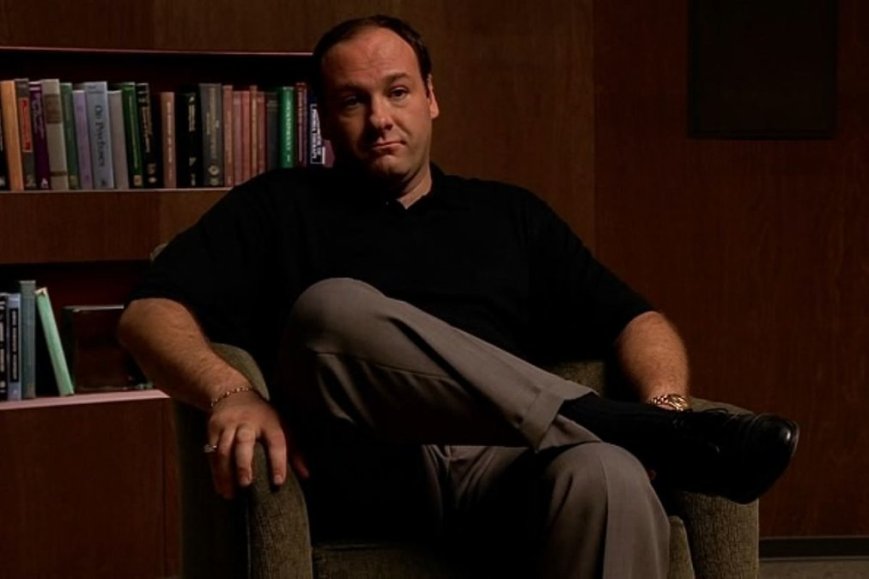 David Chase’s show also plays out as a metaphor for America at the turn of the century: the future is uncertain, the shadow of the past haunts our every move, and people will never change.  This is a cynical show with a bleak outlook.  Chase wants us to see that people hold on to the things that they know how to do, even if the changing environment is all but screaming at them to do otherwise.  The Tony we see in the pilot will change because the show is still finding its voice and because this is a pilot; quick adjustments will be made to all characters.  But after we truly get to know Tony, we’ll see he won’t change ever.  It’s David Chase’s meta-take on TV characters/shows too: they are resigned to their circular arcs.

Aside from those austere outlooks, The Sopranos is also a show about family, with season one having the strongest family ties.  Of course, there’s the family and the Family, but Tony is presented in the pilot as a loving family man with a happy home.  Is he always the sinister-looking guy who conducts his business in strip joints or can he change and be someone else at home?  The familial bonds were never stronger than they were during season one, and we’ll get to that in subsequent episodes.

I realize I haven’t talked much about the plot of the episode at all.  That’s okay, since The Sopranos will hardly ever concern itself with plot or the viewer’s expectations of conventional TV plot.  Chase’s goal for the show was to make it like a series of standalone one-hour movies that will add up to a greater whole by the end.  This has been an issue for debate among fans, coming down to the ones who watched for the intriguing mob violence and the ones who were more interested in the art film influences, stylistic flairs, and deep emotional undercurrents.  The Sopranos will indeed become the master of the standalone self-contained episode (“Pine Barrens”, “Employee of the Month”) and each individual episode has its own goal.

The pilot—although it sets a lot of future plot points in motion (Tony finding a retirement home for his mother, Tony’s frictions with Uncle Junior) and carves out the basement for the series—is about a man coming to terms with his fear of losing his family.  The family of ducks flies away and Tony scans the treetops for them, but they’re not coming back.  This sense of internal fear—at grasping for things that can’t be attained, like inner peace—drives the series.  The closing sequence is a backyard party at the Soprano home celebrating AJ’s birthday.  Carmela yells out “Let’s eat!” and the entire party makes its way off-screen, but Chase’s camera keeps the family pool in view.  The ducks aren’t coming back.

The first episode of any show you love is always fun to revisit.  I’ve probably seen “The Sopranos” six or seven times now and I still love it, but a lot of that is because I love what the show would become.  The pilot still has its missteps—the dialogue and acting not at the level we’ll become accustomed to, the too-obvious influence of Goodfellas, minor plot tweaks, etc.—but it is still a very solid episode, as far as pilots go.  Most of the problems here will be fixed and remedied by the next episode actually; a testament to how great this show is and what a great ride season one will be.  The pilot is really the only out of place hour in the show’s entire run and soon Chase and co. will be churning out great episode after great episode, classic season after classic season.  This is just the beginning of possibly the greatest television show ever made.  The ground floor, if you will.