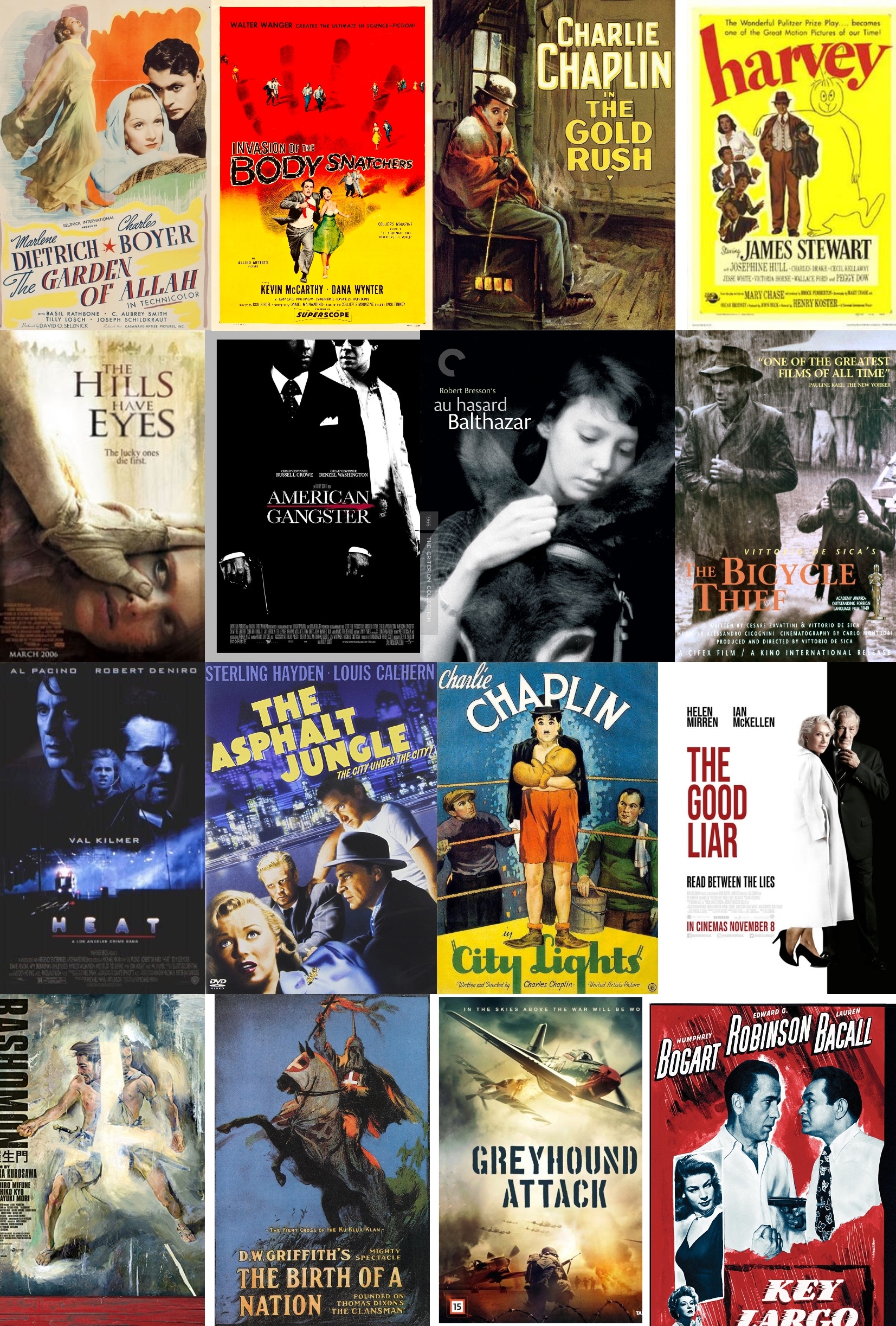 Over the last couple of weeks, I watched 16 random movies. Here’s how I ranked them, from worst to best.

Don’t ask me how I found this film, or why I watched it, or if I made it past the first 10 minutes. All I can tell you is that it’s easily one of the worst movies ever made. F

You can see the plot twist coming from a mile away. Even though you might not be able to guess the plot twist, you still know it’s coming. And when said plot twist is finally revealed, it makes you realize just how pointless The Good Liar truly is. C+

The Garden of Allah is a pleasure to look at — and so is Marlene Dietrich — but that’s not enough to make up for this boring melodrama about French monks in the Sahara. It’s a great movie to fall asleep to. B

American Gangster suffers from a bloated runtime and a lack of characterization, but Denzel Washington’s terrific acting is able to make up for these faults. His performance is so good that I didn’t notice I was rooting for a convicted murderer/heroin smuggler. B+

Grand Theft Auto V is basically the video game version of Heat. And that makes Heat … one of the most entertaining crime movies ever? Sure, it’s over-the-top and overlong and slightly over-abundant, but it’s still a fantastic pulp thriller. Could’ve been a great TV show, too. A-

10. Invasion of the Body Snatchers

The movie might be a metaphor for McCarthyism, but it’s prescient enough to not be tied down to any specific era. Invasion of the Body Snatchers is about parasitic plant pods from outer space, which is as relevant today as it was back in 1956. A bona-fide sci-fi classic. A-

A simple story, but told in four distinct variations, thus making it one of the most complex ruminations on human psychology ever filmed. A classic of golden age Japanese cinema, and quite possibly director Akira Kurosawa’s finest work. A

Is this the most depressing film ever made? Probably. Au Hasard Balthazar traces the life of a donkey from birth to death, and all his cruel masters in between, paralleled with the life of his first owner, a naïve young French girl who faces more abuse than the titular beast of burden. By the end, however, director Robert Bresson turns this bleak story into something inspiring. A

For great comedy, sometimes all you need is a great set-up. “Charlie Chaplin gets stranded in Alaska” happens to be a foolproof formula. “Charlie Chaplin cooks his own shoe and then eats it” is another one. Hilarity ensues. A

6. The Birth of a Nation

The worst thing about The Birth of a Nation is how good it is. Rampant racism aside, the film provides the blueprint for all subsequent movie epics to follow. It was revolutionary and innovative, but it also resurrected the Ku Klux Klan. Still, it’s required viewing for any cinema historian … and much better than progressivists would have you believe. A

In this underrated classic from director John Huston, a group of mobsters, led by the incomparable Edward G. Robinson, takes over a hotel during a hurricane. Even though Robinson is second-billing to Humphrey Bogart, his character completely steals the show. A

Bicycle Thieves is quite possibly the most realistic film ever made. Set in a bombed-out, post-war Rome, and filmed with non-professional actors, the film follows a poverty-stricken father and his son as they track down the titular bicycle thieves. You don’t know what you got till it’s gone. And you don’t know how important a bicycle can be until your entire livelihood depends on it. A+

Who knew that a film about a mild-mannered alcoholic who befriends an invisible, 6-foot-3-inch talking rabbit — and the family members who want to commit him to an insane asylum on account of said rabbit — could be so heartwarming? James Stewart gives one of his most inspired performances in this unforgettable comedy. A+