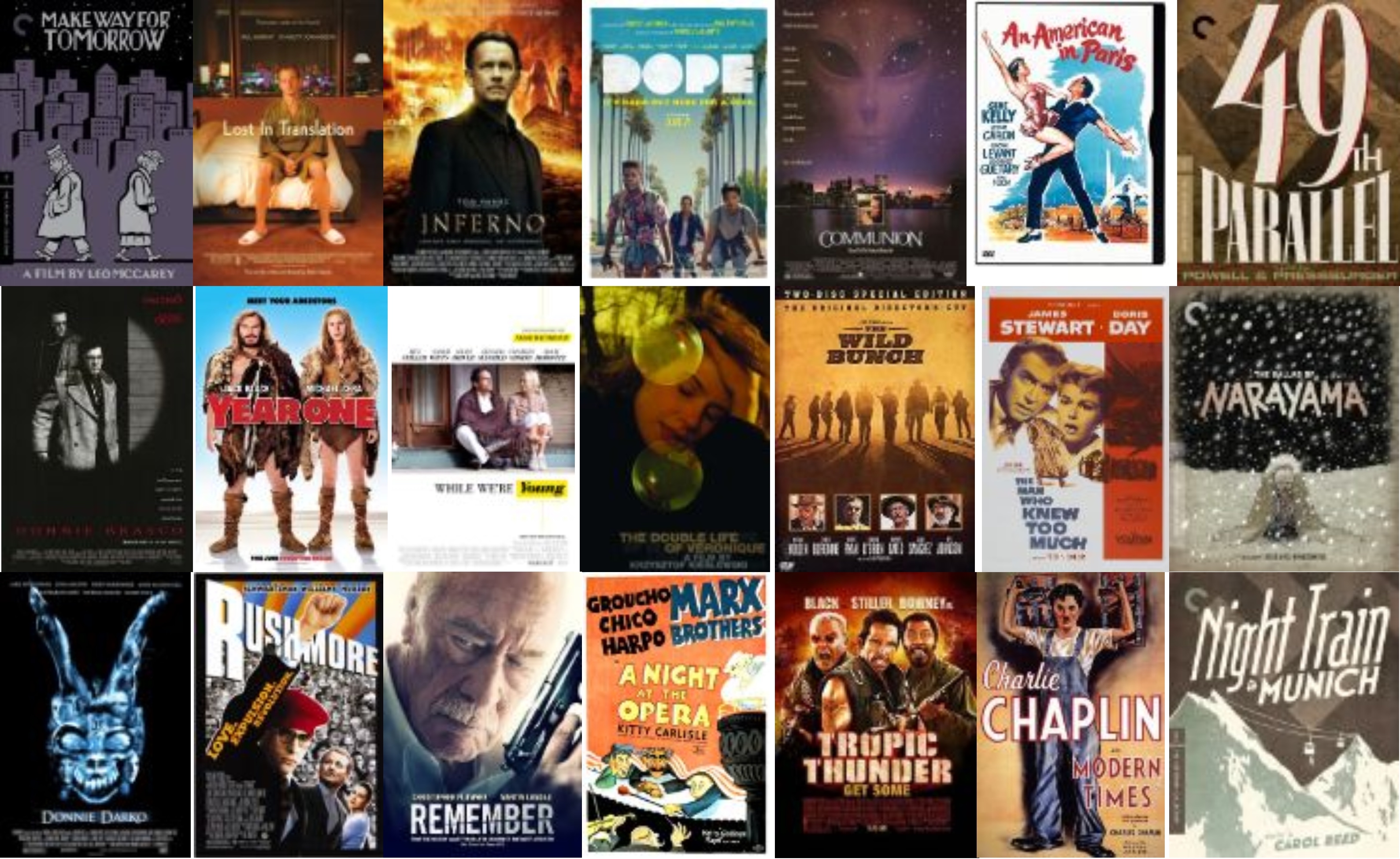 Over the last couple weeks, I watched 21 random movies. Here’s how I ranked them, from worst to best:

When I first saw this Jack Black/Michael Cera comedy as a teenager, I thought it was hilarious. 11 years later, and I couldn’t even make it through the first 20 minutes. Either I completely misjudged Year One on initial viewing, or it gets a hell of a lot funnier halfway through. Either way, it’s not worth sticking around to find out. C-

Communion is a “good bad movie.” It’s got a hilariously over-the-top performance from Christopher Walken, an unlikely soundtrack by Eric Clapton and plenty of scenes involving close encounters of the third kind. A sci-fi stoner cult classic. B-

Remember is a suspenseful tale of an aged Holocaust survivor out for revenge against the Nazis who murdered his family. Christopher Plummer delivers one of his finest latter-day performances, and for 92 minutes (out of 94), the film keeps us thoroughly entertained. Unfortunately, a plot twist in the final scene completely undermines everything that came before. B

Night Train to Munich is an entertaining noir thriller about undercover British agents on the run from Nazi soldiers. There’s witty dialogue, good chase scenes and a climactic mountaintop shootout. What more could you possibly want? B+

Taking influence from Superbad, 22 Jump Street, Breaking Bad and GTA V, this coming-of-age caper about black high-school geeks growing up in Inglewood is highly entertaining, even if it has a little trouble wrapping up all its disparate themes. Just like its conflicted main character, Dope can’t make up its mind about what it wants to be. B+

Even though this (fictional) tale of Nazi soldiers stranded in Canada was commissioned by the British gov’t as propaganda to sway the then-neutral U.S.A., it remains highly enjoyable on its own terms. 49th Parallel features great visuals, an unpredictable storyline and complex, multi-layered characters. A-

Graphic nudity and graphic violence were staples of the Wild West, but they weren’t staples of western films until Sam Peckinpah made The Wild Bunch. Featuring a raucous cast, beautiful scenery and an iconic train-robbery sequence, the film is entertaining from start to finish, even if the overall storyline leaves much to be desired. A-

Some of you might be a little disappointed to find a Wes Anderson film ranked so low on this list. Even though Rushmore is my favorite movie by the idiosyncratic director, “favorite” might not be the right adjective to use. I admire Anderson’s craft, but I find myself unable to love his films. The stories are too cute, the characters too quirk and the humor too charming. Luckily, Rushmore happens to be Anderson’s least cute, least quirky and least charming work, thereby making it his best. A-

Is this the craziest comedy ever made? Probably. Tropic Thunder brings out the funniest extremes from Ben Stiller, Jack Black, Robert Downey Jr. (in blackface, but that’s also part of the joke) and Jay Baruchel. But best of all is Tom Cruise as Les Grossman, the biggest alpha-male douchebag in the history of movies. A-

10. An American in Paris

An American in Paris doesn’t have the greatest story, especially when compared to other Gene Kelly musicals of the era. Then again, it’s not the story that matters — it’s the dancing. Luckily, the musical has some of the greatest dance sequences ever filmed, most notably the 17-minute grand finale. A-

Johnny Depp plays an undercover cop who infiltrates a small-time gang. Al Pacino, in one of his finest performances, plays the aging mobster who takes him under his wing. Their relationship forms the heart of this surprisingly emotional crime drama. Donnie Brasco is the anti-Goodfellas — all grit, no glamour. A-

8. The Man Who Knew Too Much

They don’t call Alfred Hitchcock the “Master of Suspense” for nothing. Even though this entertaining thriller is a remake of a film he already made back in 1934 (also titled The Man Who Knew Too Much), it keeps you at the edge of your seat for its entire duration, even if it does run a bit long. A

7. The Double Life of Veronique

Irène Jacob plays both Véronique and Weronika in this film about doppelgängers who never meet, but are acutely aware of each other’s existence. They share an inexplicable bond — for example, when one dies, the other is overcome with extreme sadness. Polish director Krzysztof Kieslowski tells this emotional story through imagery rather than words, which is fitting, because words can’t adequately describe the film’s vivid power. A

Donnie Darko, the 2001 cult classic, has a little bit of everything: time travel, depressive teenage angst, high-school romance, a killer ‘80s soundtrack and a supernatural, anthropomorphic, talking rabbit named Frank. In short, too many great ideas to fit inside one film. But the sloppiness is part of the charm — Donnie Darko remains an all-encompassing, unforgettable experience. A

Two lonely Americans meet each other in Tokyo. Unfortunately, it doesn’t make them feel any less alone. Bill Murray and Scarlett Johansson both give career performances in Sofia Coppola’s plotless masterpiece, a film that is based more on mood rather than moving parts. A+

“It could make a stone cry.” That’s how Orson Welles described Make Way for Tomorrow, and the adage still holds true to this day. Few films are sadder than this Depression-era portrait of an elderly couple forced to separate after their ungrateful children refuse to take them in. Always remember to honor thy father and mother, kids. A+

3. The Ballad of Narayama

The Ballad of Narayama tells the fable of a medieval Japanese village where elders are left to die on a mountaintop when they reach the age of 70. Framed as a kabuki play and filmed on an elaborate sound stage, the film contains some of the most haunting, harrowing and unforgettable imagery I’ve ever seen. The final 15-minutes are absolutely wild. A+

No actors had better onscreen chemistry than the Marx Brothers, and that’s on full display throughout A Night at the Opera, a comedy classic that remains hilarious 85 years after it was first released. Not every joke lands, but you know how the old saying goes: the more you shoot, the more you score. A+

Charlie Chaplin was a comedic genius, and Modern Times is his masterpiece. The slapstick humor still holds up, but it’s the clever jokes about poverty, industrialization and cocaine that draw the most laughs. Funny how silent movies often have the most to say. A+