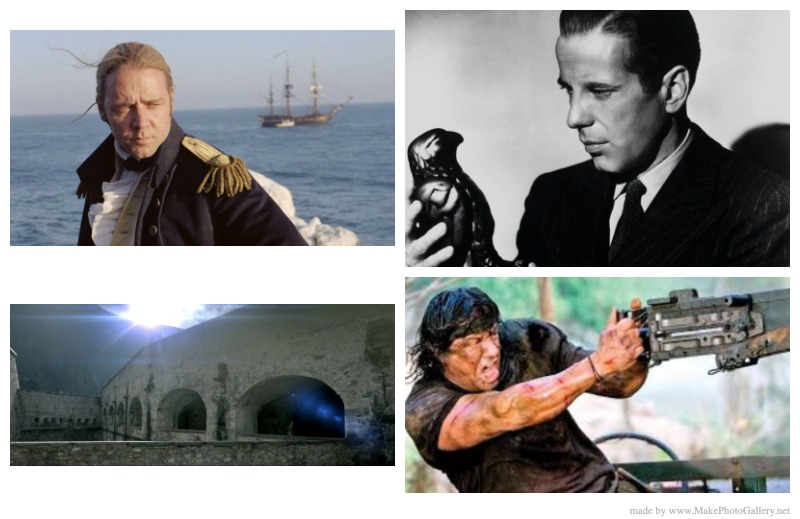 Attention readers: the Weekly Movie Reviews will now be posted on Mondays rather than Fridays. So, instead of ending your week with this column, you can now start your week with the following movie recommendations:

Master and Commander: the Far Side of the World

When it comes to two-hour adventures on the high seas, you don’t necessarily need compelling characters or a good storyline to make it work. All you really need is action. Master and Commander: the Far Side of the World is an epic that gets by on pure spectacle.

The film takes place aboard the HMS Surprise, a British naval ship off the coast of South America during the Napoleonic Wars. Bolstered by spectacular battle sequences, Master and Commander is kept afloat by the confident directing of Peter Weir and the magnetic screen presence of Russell Crowe. Yet for all the big-budget action, the film isn’t exactly memorable. Badass boats can only take you so far

Private eye Sam Spade is tasked with finding the fabled “Maltese Falcon,” a priceless jeweled artifact that attracts the attention of several shady characters. In a sly subversion of traditional detective fiction, Sam Spade just so happens to be the shadiest character of them all. His hardboiled scheme of cynical double and triple-crosses makes The Maltese Falcon one of the most entertaining and influential films of all time.

Released five months after Citizen Kane, the film marked a turning point in American cinema. Humphrey Bogart went from struggling supporting actor to overnight superstar, while John Huston — a failing screenwriter with a drinking problem — established himself as one of the most innovative directors in Old Hollywood (he kept the drinking problem).

The Maltese Falcon was also responsible for introducing the genre of film noir, a distinct narrative style defined by pessimism, moral ambiguity and a shadowy, black-and-white aesthetic. Much of the film takes place in the late hours of the night, when mysterious characters like Joel Cairo and the “Fat Man” (Peter Lorre and Sydney Greenstreet, respectively) make their presence known.

Although the storyline is somewhat convoluted, the plot isn’t necessarily the point. It doesn’t even matter that the titular dingus is never actually found. With an impeccable cast and razor-sharp dialogue, Huston’s directorial debut is a non-stop thrill ride from start to finish, one that still has the power to captivate and make us laugh 80 years after its release.

Richard the Lionheart is utter shit. It looks like a video game. It features a rape scene in the first ten minutes. The sound mixing is an insult to ears, the cinematography is an insult to eyes and the storyline is an insult to history. Poor Malcolm McDowell must’ve been going through some really tough times if he agreed to be in this low-budget piece of Eurotrash.

I turned it off less than a quarter of the way through and watched Wheel of Fortune instead. One of the smartest decisions I’ve ever made.

Did the Rambo franchise really need a reboot? Probably not. But, then again, more Rambo can’t hurt. The fourth installment in Sylvester Stallone’s mercenary saga — and the first since Rambo III in 1988 — pits the professional killing-machine against the entire Burmese army. In typical fashion, Rambo easily comes out victorious, but it’s the way he does it that’s so … er, fascinating.

Rambo 2008 is one of the bloodiest, goriest and most violent action films that I’ve ever seen (only topped by Rambo: Last Blood in 2019). Stallone’s body count in this movie has to be in the hundreds, if not thousands. He kills everyone and everything, in every way imaginable. It doesn’t matter if he’s using a bow-and-arrow, an M2 machine gun or his own fists — Rambo is gonna murder the fuck out of you one way or another.

The storyline is very cut-and-dried: Rambo good, bad guys bad, and the only way to defeat the bad guys is to kill them. No romance or melodrama. Just non-stop action. That’s all we want out of the film anyways, and it certainly delivers. If you’re coming into Rambo looking for a smart thriller that condemns violence, then you’ve come to the wrong place.

This is the very definition of Super Dumb Macho Movie. Am I supposed to be embarrassed that I enjoyed it?