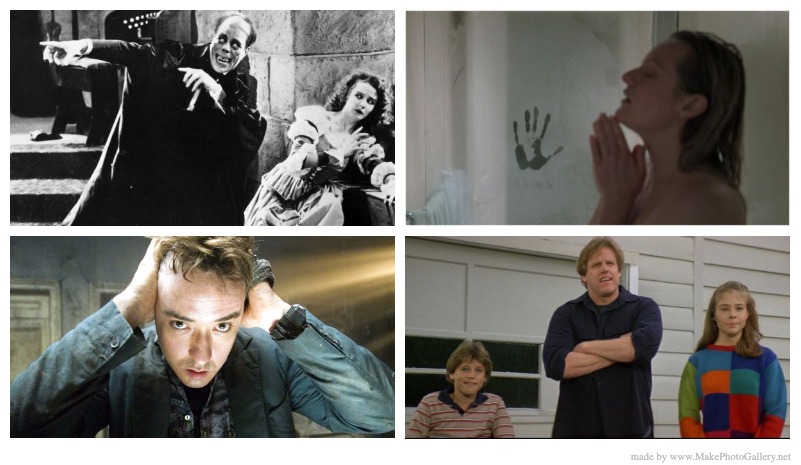 Hey, would you look at that? It’s Friday the 13th. To mark the occasion, here are some brief thoughts/analyses on a couple of horror movies I watched this past week.

The Invisible Man begins with Cecilia (played by Elisabeth Moss) desperately escaping her secluded home. Her violent, abusive boyfriend chases her down but is unable to catch her. When Cecilia finds out that he committed suicide, she is finally set free from the sadistic relationship. Or is she?

Directed by Leigh Whannell (a recurring collaborator on the Saw and Insidious franchises), this modern-day retelling of H.G. Wells’ 1897 novel focuses more on real-life horrors like trauma and toxic masculinity rather than sci-fi or paranormal activity. The film doesn’t succeed. Although Moss is mostly excellent as the vulnerable main character, the rest of Invisible Man is emotionally hollow.

The movie is a #MeToo allegory that promotes style over substance — an insincere readymade going through the motions. Just throw paint over it and move on.

The Phantom of the Opera

The Phantom of the Opera isn’t scary. We have Andrew Lloyd Weber to thank for that. Even Homer Simpson called the Phantom “the gayest supervillain ever.” Nevertheless, this silent horror film from 1925 is probably the best adaptation of Gaston Leroux’s 1910 novel.

Directed by Rupert Julian (who abandoned the production halfway through), The Phantom of the Opera successfully builds a haunting atmosphere, even though it isn’t frightening in the traditional sense. For instance, the five-tiered basement below the Paris Opera House is a magnificent set piece that stands out even today, complete with shadowy catacombs and its own River Styx. Likewise, Lon Chaney’s grotesque portrayal of the title character is one of the cinema’s most memorable creations. The actor dyed his eye sockets black, glued his ears to his head and used wires to pull back his nostrils. That’s some fucking dedication. It pays off, too — Chaney’s Phantom is legitimately creepy.

The Phantom of the Opera won’t make your Top 10 horror films list — probably won’t even make your Top 25 — but it’s still an entertaining spectacle nonetheless. It also proves that a silent Phantom is better than a singing one.

Stephen King hated Stanley Kubrick’s version of The Shining. Remind me to tag @OldTakesExposed. So, in 1999, the prolific writer returned to the haunted-hotel genre with 1408, a similarly claustrophobic ghost story that retreads familiar territory. Play the hits, Mr. King!

For the 2007 film adaptation (which grossed $133 million at the box office), John Cusack plays Mike Enslin, a non-fiction horror writer that doesn’t believe in ghosts. He gets an invitation to stay in room 1408 at The Dolphin Hotel. Apparently, 56 people have died there over the years, and no one has ever lasted more than an hour. Causes of death include suicide, along with peculiar natural phenomena like hypothermia, blindness and drowning.

In the first half of the movie, 1408 is genuinely spooky. Cusack checks into the room, and then it’s one scary scenario after another. Alarms go off. Ghosts pop up out of nowhere. The space-time continuum gets all fucked up. It’s like a bad acid trip — paranoid, isolated and completely alone, with no sense of storyline.

1408 falls apart in its second half when it does just that — attempts to build a storyline. The plot twists become contrived and unintentionally hilarious, with a bad ending to boot. If it weren’t for the failed attempts at a mind-fuck, 1408 would truly be an underrated horror film. With a solid performance from Cusack, it probably is anyways, but let’s just say that it could’ve been a lot better.

Silver Bullet is bad. Like BAD bad. But it’s delightfully cheesy, and therefore entertaining. Starring Gary Busey as…essentially, he’s just playing himself, but stay with me here…an alcoholic uncle who helps his paraplegic nephew fight a small-town werewolf, Silver Bullet is one of the more inessential Stephen King adaptations.

Busey’s over-the-top performance alone makes the film worth watching, but the rest of Silver Bullet isn’t without its charms. Because the film doesn’t take itself too seriously, it remains an enjoyable, lighthearted affair. And the motorcycle-wheelchair hybrid is fucking sick.