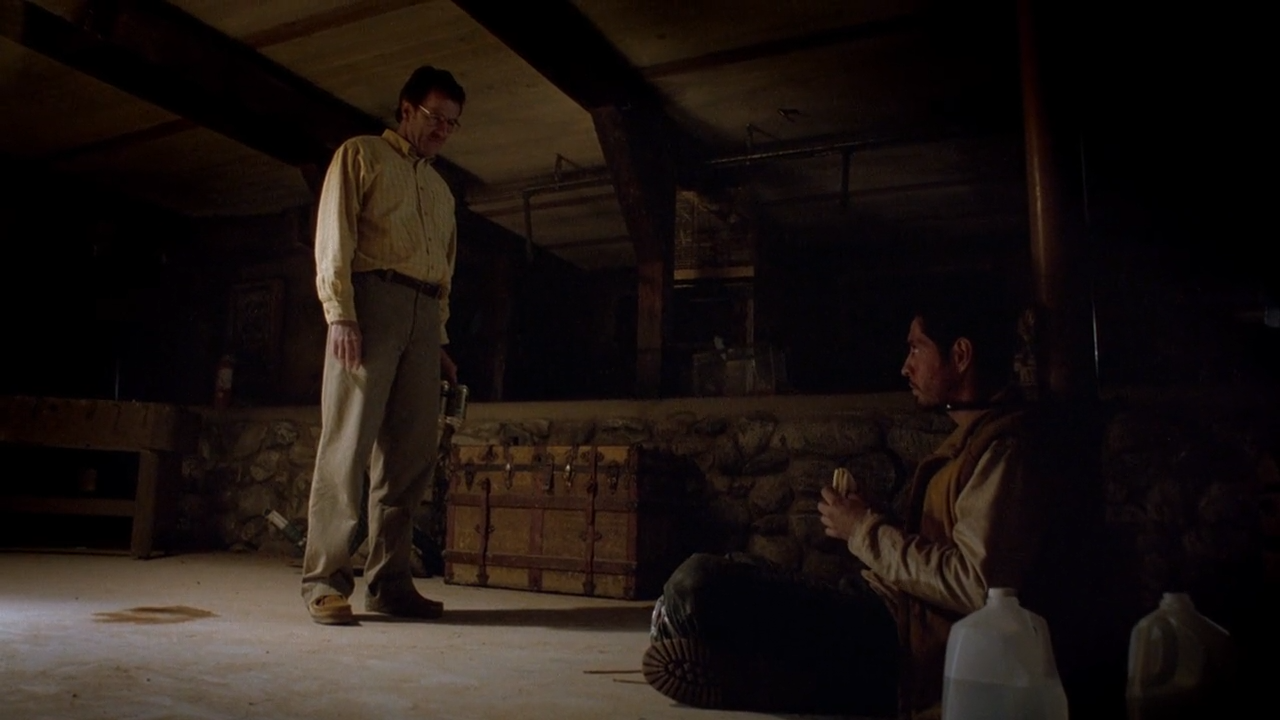 Throughout the last two episodes, Walt’s been weighing the pros and cons of killing Krazy-8. On the one hand, “it’s the moral thing to do,” citing reasons such as “Judeo/Christian values,” “the sanctity of life” and, lastly, “You are not a murderer.” The other column he writes down is much more straightforward: “He’ll kill your entire family if you let him go.”

Even though we pretty much know what’s going to happen, we don’t expect it to happen until it actually does. Walt killing Krazy-8 is inevitable. But it still manages to come out of nowhere.

Just like the previous episode, “And the Bag’s in the River” uses a quiet buildup to reach an explosive conclusion. The finest scene is Walt’s lengthy, one-on-one conversation with Krazy-8, which provides a surprising moment of warmth and empathy. It’s the most genuine interaction of the series so far.

While bringing Krazy-8 a sandwich, Walt passes out from a coughing fit. He wakes up 15 minutes later, picks up the shattered plate and brings another sandwich down. Walt is looking for any good reason not to kill Krazy-8. “Sell me,” he pleads to him. “You’ve gotta convince me.”

So, they begin talking. Krazy-8 tells about his childhood, Walt confesses that he has cancer and, come to find out, the two might’ve even met each other 17 years earlier, go figure. Did we just become best friends? The two mutually agree to go their separate ways and act as if the whole situation never happened.

As Walt goes to retrieve the key, he checks the garbage can to piece together the broken plate. One of the glass shards is missing. Now, undeniably, Walt has no choice. Garroting Krazy-8 to death with a bike-lock is an appropriately gruesome end to the “Cat’s in the Bag and the Bag’s in the River” moral conundrum. It’s brutal to watch, but impossible to turn away.

The only thing that brings the episode down is the poor secondary storyline. Watching the daily lives of Skyler, Marie, and Walter Jr. seems to hurt the series more than it helps. Rather than provide a necessary break from the heavy subject matter, the B-plot instead disrupts the entire episode.

Nevertheless, it’s a small trade-off to make in the grand scheme of things. Breaking Bad has basically been a perfect TV show so far, which means any complaints I’ve made are just nitpicking.

Even at its worst, Breaking Bad is still one of the best.

1. No Country for Old Men: Anton Chirgurh uses his handcuffs to garrote the police officer that put him in custody. Probably the most brutal murder on this list. That’s because it’s also the longest murder on this list. Listening to the officer helplessly scuff his boots on the floor while the camera focuses on Chigurh’s unblinking expression is harrowing to say the least. When the camera reveals all the scuff marks, the evil becomes reality.

2. The Godfather: Luca Brasi is garroted with piano wire by one of Virgil Sollozo’s henchmen. A classic, old-school Mafia murder. Bonus points for setting the entire Corleone vs. Five Families mob war in motion. Also the source of the famous line: “Luca Brasi sleeps with the fishes.”

3. “…And the Bag’s in the River”: Walt garrotes Krazy-8 with a bike lock. This is definitely the most “painful” murder on the list, not only because of its emotional stakes, but because it looks like it hurts really fucking bad. Krazy-8 is fastened to a pole in Jesse’s basement with an out-of-date metal bike lock around his neck. To add insult to injury, Walt was about to free Krazy-8 before he decided to kill him. This murder is medieval. Bonus points to Walt for absorbing several stabs to the leg as he completes the murder.

4. From Russia with Love: The greatest fight scene in cinematic history climaxes with James Bond garroting Red Grant with his own wristwatch. It’s the most claustrophobic murder on this list — Agent 007 and his would-be assassin try to kill each other in a train compartment with the lights off for several excruciating minutes. At first, Grant chokes Bond with the wire in his watch, but then Bond is able to execute a last-second reversal and finish the job. There’s also some much-needed levity as Bond takes money from Grant’s suit pocket and jokes with his dead body: “You won’t be needing this. Old man.”

5. “College,” S1E5 of The Sopranos: Tony Soprano garrotes Febby Petrulio with a length of wire. Febby was a former gangster that became a snitch and turned to the Witness Protection Program. Considering the risk involved — Tony is visiting potential colleges with his daughter in New England — this is an impressively orchestrated kill. Nevertheless, it’s also the first time we truly discover what a monster Tony is.

Honorable Mention, A History of Violence: Joey Cusack is almost garroted by one of his brother’s henchmen. He’s basically John Wick before John Wick was even invented. Joey Cusack is the ultimate killing machine, and probably one of only two people in the world who can get out of a garrote and then kill the garroter (the other being James Bond). Honorable mention because it involves an attempted garrote, not a successful garrote.