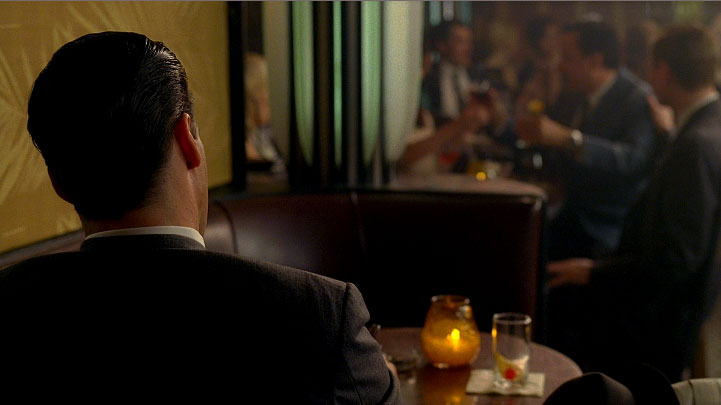 The central premise of Mad Men‘s pilot is simple: a day in the life of a Manhattan ad-man in 1960. We follow the main character as he wines and dines wealthy clients, prepares a pitch for Lucky Strike cigarettes and then has sex with his beatnik mistress. All in a day’s work.

But that would be selling Mad Men short. This is a series that transcends its subject matter, and plot summaries rarely do it justice. It wants nothing more than to examine the complex nature of humanity through the prism of a few infinitesimal lives. Isn’t that enough?

Of course, one of those infinitesimal lives belongs to Donald Draper, who just so happens to be the most interesting man in the world. He’s not just an advertising executive; he’s a way of life. Women want him, and men want to be him. The perfect TV character.

The goal of the pilot is to sell us on Don’s lavish lifestyle, and thanks to actor Jon Hamm’s effortless charisma, this is accomplished tenfold within the first five minutes. The series as a whole, however, wants to delve deep into his complex psyche. In its ambitions and aspirations, Mad Men is the clear heir apparent to The Sopranos.

Weiner also places a big emphasis on the show’s look and feel. Where so many other TV shows often fail, Mad Men succeeds in crafting a setting that is entirely authentic. It’s the rare period drama lacking both pretension and cheap nostalgia. Take the cinematography, for example: even though the visuals are meticulously framed to Wes Anderson levels of symmetry, nothing about the era is glamorized. The sights, the sounds, the smells — this is America as real as can be remembered. Or researched.

Mad Men isn’t a trip down memory lane; it’s a look in the mirror.

The racism is subtle, but it’s there, right out in the open. We see as much in the opening scene, in which an African American waiter is immediately reprimanded for striking up a conversation with Don. Instances like this will grow more frequent as the Civil Rights movement picks up steam later in the series.

Likewise, the sexism runs rampant. Even worse, it’s blatantly encouraged. We watch as Peggy Olson (played by Elisabeth Moss), during her first day on the job as Don’s new secretary, experiences the era’s overt misogyny firsthand. The perpetrator is a sneering, young, account-executive named Peter Campbell.

In what may be the episode’s only misstep, Peggy gives in to his advances, and sleeps with Pete later that night. It’s a questionable move, for sure.

When Don finally arrives home at the end of the episode, like Odysseus reuniting with Penelope, it comes as quite a shock. None of his actions throughout the day would suggest that he also has a wife, kids and cozy family life waiting for him when he returns from work. Then again, Mad Men is always subverting expectations — maybe Don Draper isn’t such a good guy after all.

It initially took me several viewings to fully appreciate this episode, but I now view it as a near-perfect introduction to the world of Mad Men. The characters are fully-formed, the pacing is elegant, and the overall tone is warm and welcoming. What more could you ask for?

Even though it lacks the traditional TV action of a pilot episode, “Smoke Gets in Your Eyes” is a thoughtful and introspective start to one of the greatest shows in television history.