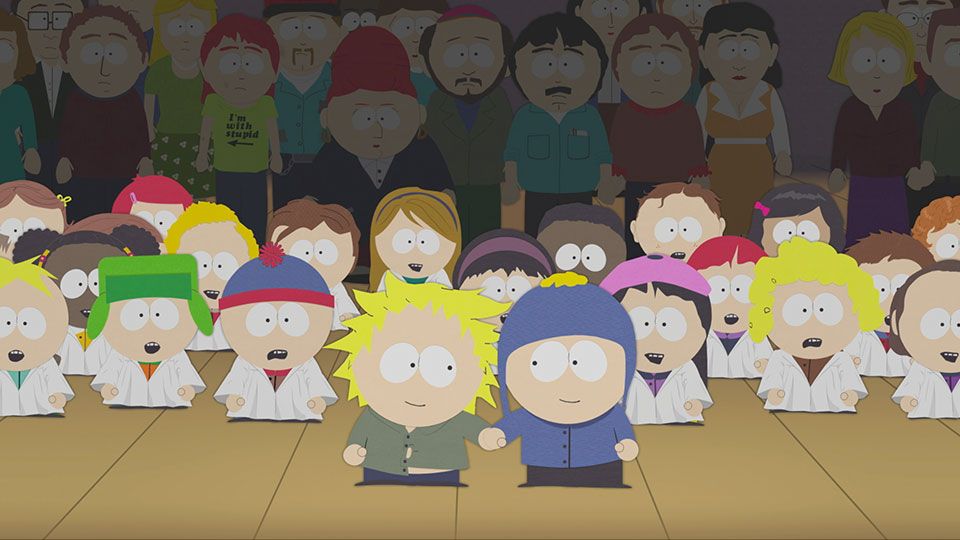 A bit heavy-handed, no? “Put It Down” begins with Tweek screaming to us: “WE’RE ALL GONNA DIE! THEY HAVE NUCLEAR MISSILES! WHY ARE YOU JUST SITTING THERE DOING NOTHING?!?! NORTH KOREA WANTS TO KILL US ALL AND OUR PRESIDENT KEEPS MAKING IT WORSE!!!!”

So it’s gonna be one of those episodes, eh? Not that I mind when South Park gets political; I just don’t necessarily enjoy it as much when the message is being delivered by a secondary character. Especially someone as annoying as Tweek. Shut the hell up already.

Tweek and his friend Craig shared a touching moment back in season 19 (“Tweek x Craig,” their literal coming-out party), but once again the show expects me to care about them more than I do. With the spotlight on this auxiliary duo — one of them an unbearable paranoid and the other bland as a butthole — the laughs are few and far between.

And because the humor is so sparse, the episode’s message rings hollow. Even the closing musical number, which pleads with the President to stop tweeting (featuring a Cartman rap on top of it!!), is not much fun, let alone fun-nee. The episode is a disappointment, and finds creators Trey Parker and Matt Stone in all-too-familiar “preachy” territory.

Look, we get it: Trump’s America isn’t ideal. But under seeming pressure to say something (anything!), Parker x Stone came up with this hamfisted half-hour. They’re even dumber than Tweek x Craig if they think calling out Trump’s Twitter fingers qualifies as poignant.

And they’re even bigger hypocrites than Cartman if they believe that Twitter awareness is a noble cause pour la résistance. What happened to that “we’re all gonna die” shit?

-It appears that Cartman and Heidi are back together, which makes last week’s ending even more hackneyed in hindsight. Once again, there isn’t much incentive to invest in this storyline. Cartman’s rap, in which he confesses to suicidal thoughts, is more remarkable for its technical skill rather than its ability to make one laugh.