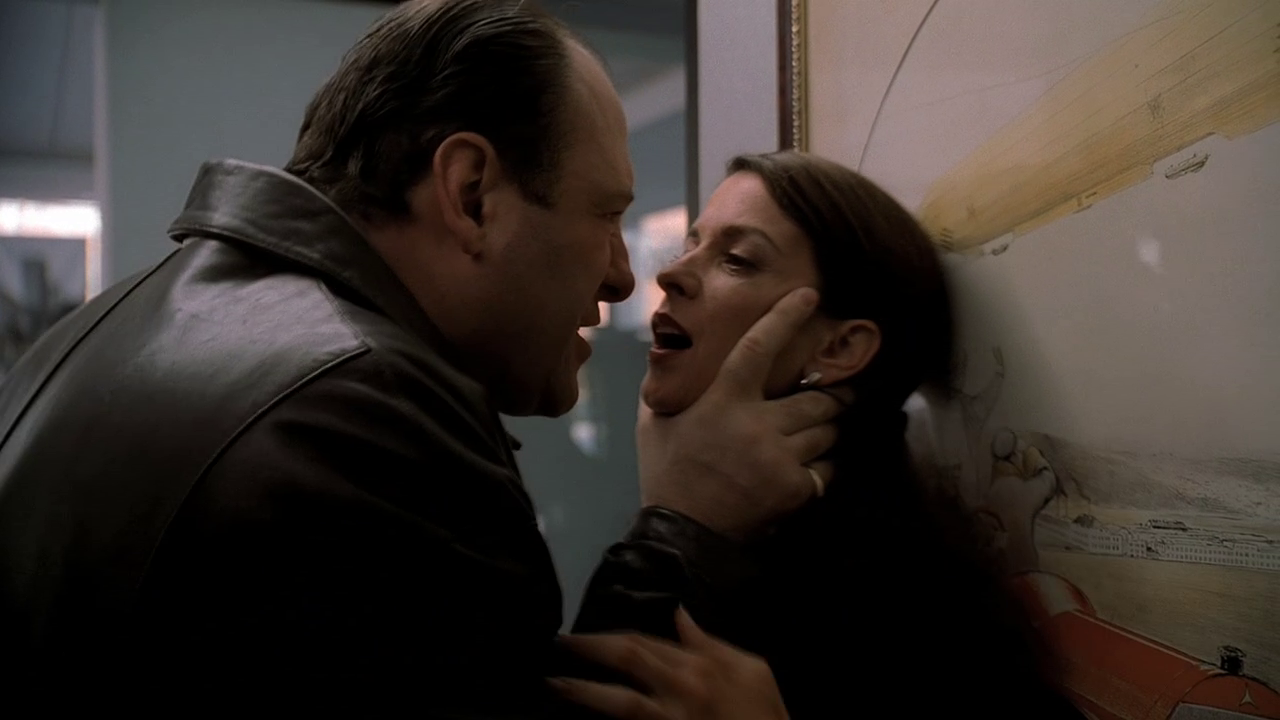 Personally, I can’t stand Jackie Jr. He’s one of the dumbest characters on the series. But that doesn’t make his plight any less tragic (or comical). In “Amour Fou,” the penultimate episode of season three, Jackie Jr. and his buddies pull a similar stunt to what Matt Bevilacqua and Sean Gismonte did in season two, and we all know how that turned out. If you think Jackie Jr. makes it out of next week’s finale alive, you’re probably dumber than he is.

Jackie has wandered through season three looking for a purpose, a sense of direction. He wanted to be a gangster like his father, but his gangster father wanted him to be a doctor. While dating Meadow, he seemed to be caught somewhere in the middle (“I want to design men’s fashion, I think I could be good at it”). Now that she’s broken up with him, he’s completely bottomed out.

Tony had originally thought the kid bottomed out weeks ago, but there are always new levels of low that Jackie Jr. can stoop. In “Amour Fou,” he attempts to rob a card game run by Ralph Cifaretto. Things quickly go south.

Of course, it’s easier to be sympathetic to Jackie Jr. when he is compared with Gloria Trillo. Sure, her role has added an extra dimension, a fill-in for the untimely absence of Nancy Marchand, but she’s been a thorn in the side of anyone who comes near.

I’ll admit, I’m not a fan of her character either, but she has been utilized as a great storytelling device. “Amour Fou” finds her and Tony in the throes of their crazy love — slashing tires, stalking the Soprano household and sex, sex, sex.

As bad as it is to say, we’re on Tony’s side when the two get into a violent argument. I’m not saying he was right to hit/choke her, but Gloria’s day of reckoning has been a long time coming. Remember, Tony tried to do the same thing to his mother back in season one. But unlike Livia, Gloria has no family or friends (or viewers) to sympathize with her; she continually and habitually pushes people away until she is left all alone. And she has no one to blame but herself.

Tony, via Patsy Parisi, puts a real fear of death into her at episode’s end, threatening to kill her if she ever contacts him again. The relationship is over, and Tony — via Dr. Melfi — has finally come to realize his poor judgment. But if he’s learned anything at all or changed in the slightest, well, that’s a question for another season.

The only one who truly deserves our sympathy is Carmela. Her Catholic guilt of being married to Tony has been building since “College,” but she reached a breaking point when she visited a psychiatrist in “Second Opinion.” Luckily (or unluckily), her visit to a priest this episode gives her the answer she’s been looking for: it would be against God’s wishes to get a divorce, so she might as well stick it out.

But in David Chase’s world of bitter realism, a divorce would be the morally right thing to do. Here, Carmela takes the easy way out. She puts up with Tony’s thoughtless, selfish and emotionally destructive behavior because that’s what she agreed to when they got married. Nevertheless, she finally takes off the sapphire-studded guilt ring, a sign of moving forward.

The Sopranos is a show about the mafia, but it’s just as much a show about family. Even more so, it’s a show about marriage. As Dr. Melfi so elegantly puts it: “She might leave you, but you’ll never leave her. Despite your mothering, you made one good decision in your life vis-à-vis women.”

“Amour Fou” opens with the same Vivaldi aria (“Sposa son disprezzata”; English translation: “I am a scorned wife”) that closed “Pine Barrens.” It applies doubly in this installment, but we reach a change of tone by episode’s end: a Bob Dylan cover of Dean Martin’s “Return to Me.”

The song is a perfect note of reconciliation for the episode close on, even if the shot of Ralph Cifaretto consoling a sobbing Rosalie Aprile would be more befitting of “Not Dark Yet.” And the final image of an inconsequential Patsy Parisi driving home to his wife with a bag of groceries (after having just threatened Gloria at gunpoint) is a summation of “Don’t Think Twice, It’s All Right.”

Despite everything, Tony and Carmela’s marriage seems to be on sturdy ground, at least for now. Even though Jackie Jr.’s impending death dominates the storyline, the overall mood seems to be one of resolution. “Amour Fou” might not be an action-packed spectacle, but it fits right in with the ambivalent atmosphere that the latter half of season three has luxuriated in.

It’s not dark yet, but it’s getting there.