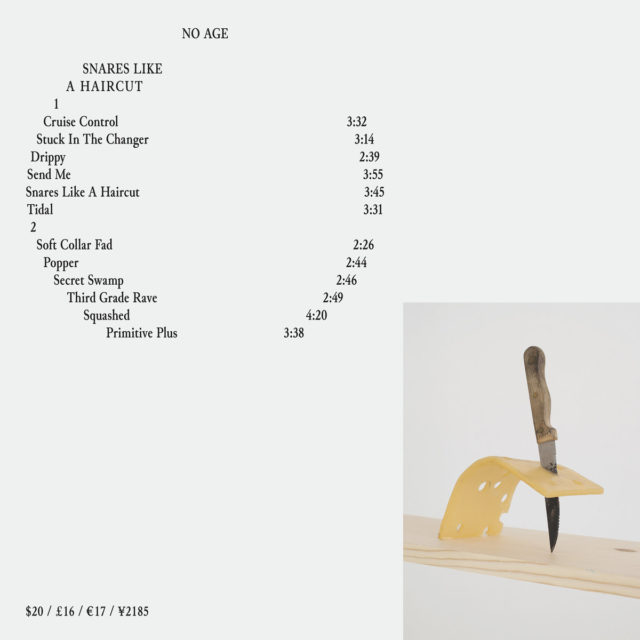 No Age, the L.A. art-punk duo that stole N.Y.C.’s sound, makes a low-key return with Snares Like a Haircut, their fourth studio album.  It’s a return to the hard rock minimalism of Nouns, their debut, combined with their more recent, indie-driven pop instincts.

In other words, it’s “classic” No Age by the numbers—roaring, distorted chord changes, pounding lo-fi drums, game manager (a.k.a. good enough) vocals and a squall of sexy influences.  Since Snares Like a Haircut is probably No Age’s least original album, there are audible flashes of Ramones, Yo La Tengo, Cryptograms-era Deerhunter, Dinosaur Jr., Hüsker Dü and, of course, The Jesus and Mary Chain.  Like I said, sexy influences.

Yet No Age—guitarist Randy Randall and drummer/singer Dean Spunt—are an accomplished enough band to ensure that they are not just another group of rip-off artists.  Their sometimes-pretty-always-fuzzy post-indie noise rock is small and engrossing, which is exactly what noise rock needs to be right now.

I haven’t much cared for Spunt’s SoCal skater drawl, but his is the perfect blend of laidback monotone with which to pilot such a dangerous wall-of-sound.  Just like their 2008 breakthrough, Snares Like a Haircut is catchy, drum-driven rock.

The songs are short and sweet, with Randall’s six-string squawks and squalls a little dreamier than usual.  It’s amazing how beautiful amp feedback and gated distortion can be.  Carefully studying the Kevin Shields catalogue can do that for you.

None of the melodies readily stick in your head, though, which is a bit troubling.  The opening trio (“Cruise Control,” “Stuck in the Changer” and “Drippy”) packs a gritty punch, and there are some good tuneskis on the back half, but No Age—now over 10 years into their career—isn’t as interested in pushing boundaries.

They can coast with this dream-noise sheen for as long as they wish, because they are the only ones doing it right now and they’re damn good at it.  But five years since their last LP (An Object, 2013), you’re not wrong to have expected a little more substance out of Snares Like a Haircut.

It’s an enjoyable record, sure, but it can also be used in favor of the “rock is dead” argument.  Snares could have been released five years ago, 10 years ago, even 25 years ago, without much of a difference.  No age after all.