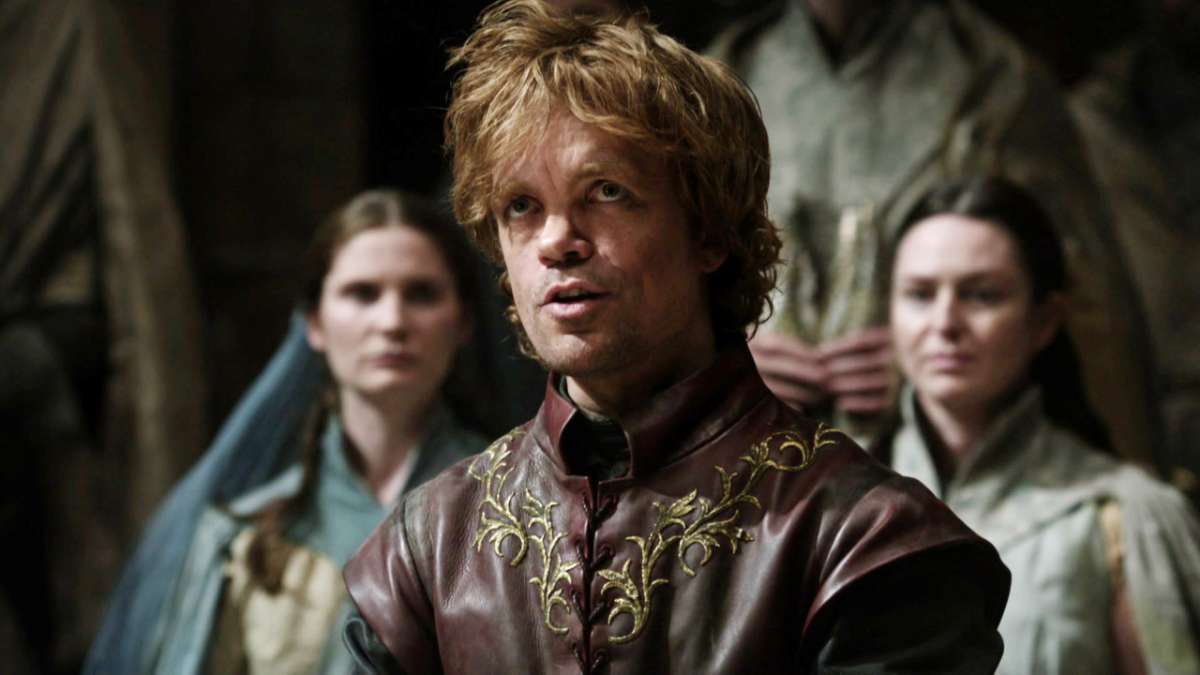 In the Court of the Crimson King

Game of Thrones didn’t gain the Game of Thrones reputation until its second season.  Season one then is quite possibly the greatest misdirect in TV history—a tightly-structured, low-key, medieval period-drama masquerading as fantasy genre-fare.

The debut year just has a different feel than the rest of the Thrones canon.  For one, the plot hasn’t yet shotgunned into numerous threads across the map.  Ned Stark is a compelling lead, and—for the only time in the show’s history—the obvious main character.

Season one is, comparatively speaking, relatively low-stakes.  The level of urgency is neither catastrophic (seasons 5 & 6) nor apocalyptic (7 & 8).  The Seven Kingdoms aren’t even at war yet (2 thru 4).  Instead, season one exposes the seedy underbelly of deceit and political corruption running rampant throughout King’s Landing.

“A Golden Crown,” like its title suggests, is all about ruling—what does it take to be a true leader?  There are many who hold power in this episode, and all have a different approach to handling the headwear.

King Robert isn’t cut out for the job.  He was an old-school warrior with enough testosterone to conquer the Iron Throne, yet for the seventeen years that he’s sat in it, all he’s done is go on hunts, fuck prostitutes and drink to the glory days.  That’s why he brought Ned Stark down from Winterfell in the first place.

As Robert goes on his annual hunting trip, he leaves Ned to handle affairs in his stead (reinstating him as Hand).  The honorable Ned Stark takes his honor too far.  He’s making SMH decisions in the name of justice—following the rulebook too closely and turning everyone against him.  Calling for the arrests of Ser Gregor “The Mountain” Clegane and Tywin Lannister are basically acts of war.

Here we have two members of the old guard with their better days behind them.  Ned is in way over his head, while Robert’s is buried in between a pair of tits.  Neither are fit to rule the Seven Kingdoms, and they’re both losing their grasp.

Robb Stark is busy becoming the main man of Winterfell during his parents’ absence.  As honorable as his father but with a brasher, younger head on his shoulders, Robb finds himself prematurely pressured into wartime decisions.  And that’s largely because of what his parents are doing.

Catelyn has made a foolish call in arresting Tyrion, charging him with Bran’s attempted murder and Jon Arryn’s death and forcing him to face justice at the hands of her crazy sister Lysa.  Out of all the rulers in “A Golden Crown,” the Lady of the Vale is the most batshit insane.

Luckily, in the show’s funniest scene so far, Tyrion knows how to talk his way out of certain death.  Blessed with the gift of gab, he outsmarts his captors and demands a trial by combat (a major loophole in the Westeros justice system).  Thrones has seen occasional humor so far, but nothing like Tyrion’s “confession.”  This much-needed flair of comedy will make characters like Lil Lord Lannister (and his cutthroat champion, the mirthful mercenary Bronn) favorites of mine down the road.

Three compelling plots—Ned Stark as interim head coach of the Seven Kingdoms, Tyrion on trial at the Vale and, most welcome of all, Danaerys growing into her role as khaleesi—make this episode a massive success.  This is where Thrones earns my unmitigated trust.

In an episode where our two best characters—Ned and Tyrion—are at their peaks, Danaerys Targaryen is the one who shines brightest.  Not only does she eat a raw horse heart and hold scalding dragon eggs in her bare hands, but she also accepts that it’s time to move on from her sadistic, abusive, pathetic brother.

She moves on alright.  Khal Drogo, who has gone from noble savage to quite the brutish charmer, gifts Viserys Targaryen with the titular golden crown.  He pours a vat of boiling jewelry upon his head.  The self-proclaimed “last dragon” dies mid-scream with a loud, comical clunk as he hits the ground.

For the first time, the storyline in Essos has provided us with integrated excitement.  A violent main character death will do that, but the segment belongs to Dany.  She does not look away.  “He was no dragon.  Fire cannot kill a dragon.”

Perhaps she is the most fit ruler of all.

The storyline in Essos is on par with the superb storylines featured in Westeros, and that makes this episode one of season one’s finest—a precursor of the Thrones experience to come.

Also, the first episode that doesn’t end with cliffhanger bait.  Instead, a stone-faced Danaerys before an ominous cut to black.  Prestige bait.

Perhaps the most insufferable, golden-haired douche on the entire show (and we’ve already got a couple of those), I’m surprised Viserys Targaryen, last living son of the Mad King Aerys, made it even this far.  I hated Viserys not only because of his prissy appearance, but because of his abusive, incestuous (this is Game of Thrones, after all) relationship with his younger sister Dany.

I don’t have one fond memory of Viserys at all—from his aimless sexposition to his unbelievable sense of entitlement, he was truly a bad character through and through.

The best thing he ever did was die, and he gets the granddaddy of all deaths.  Getting molten gold poured on your head has got to rank pretty high on the Thrones Death-o-Meter.  Yet for some reason, I still think Oberyn Martell had it worse.

– Jon Snow gets the week off again.  If you truly miss the Wall, just imagine a bunch of circa-1980s training montages of him and Samwell Tarly learning to become true men of the Night’s Watch.  Lots of sword fighting, warding off bullies and coming to terms with their beta male sexuality.

– The biggest reveal comes in Ned’s final scene when he realizes the secret Jon Arryn had stumbled upon before his death: Joffrey and his two younger siblings (Tommen and Myrcella) are all products of Cersei’s and Jaime’s incestuous affair.  He finally comes to the conclusion when Sansa makes a comment about Joffrey’s blonde hair.

– The trial-by-combat will come up several times throughout the show.  Tyrion will have another great courtroom moment in season four.  I just wanna know why doesn’t everyone pull this trick?

-Bran is nearly killed (again) by a group of Wildlings who are heading south (“As far south as south goes.  There aren’t no White Walkers in Dorne”).  Luckily, Rob and Theon come to the rescue.  The woman wildling, Osha, is taken back to Winterfell as prisoner.

-We hear some mentions of Mance Rayder, the “King Beyond the Wall.”

-Take note of King Robert’s squire, Lancel Lannister, being ever so keen to offer him more wine.

“I should not have hit her.  That was not…that was not kingly.”

“When I was 12, I milked my eel into a pot of turtle stew.  I flogged the one-eyed snake.  I skinned my sausages.  I made the bald man cry, into the turtle stew.  Which I do believe my sister ate, at least I hope she did.”

“Back in our day, you weren’t a real man until you’d fuck one girl from each of the Seven Kingdoms and the Riverlands.  We used to call it ‘making the eight.’”

“I don’t want someone who is brave and gentle and strong.  I want [Joffrey]”