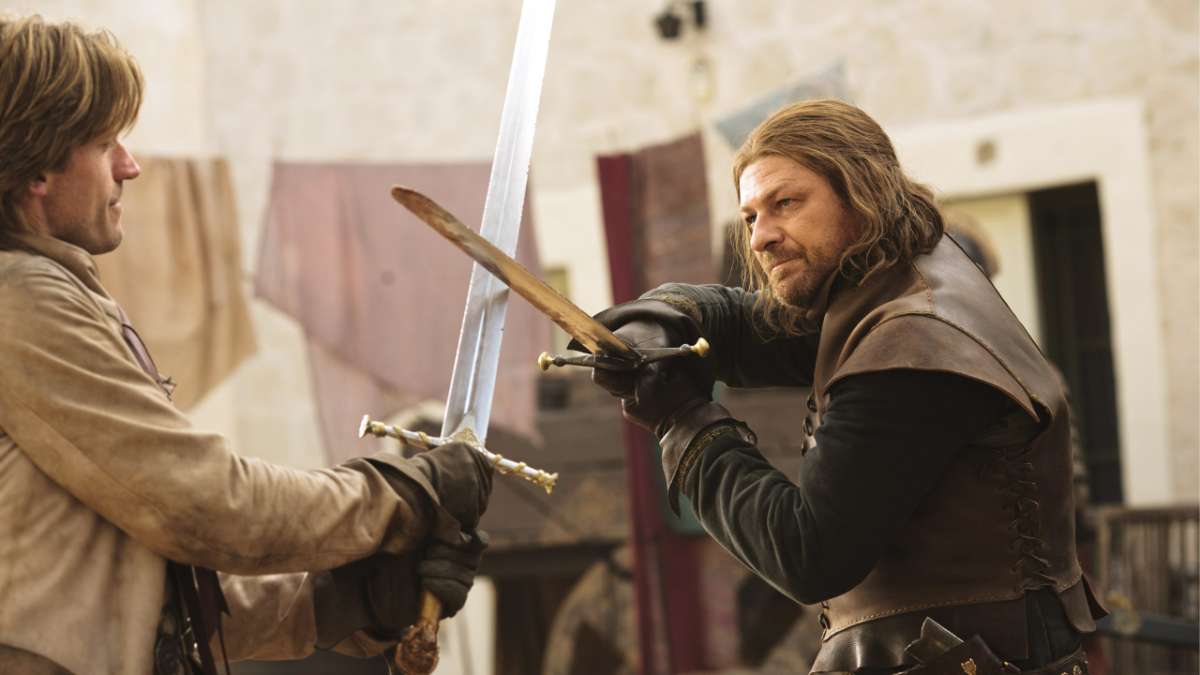 A Wolf at the Door (It Girl. Rag Doll)

Plenty of action as we reach the halfway point of Game of Thrones’ rookie season.  “The Wolf and the Lion” is attacking on all fronts—balancing the slower, meditative pace with bursts of physical excitement.

So far, this is the series’ most explosive episode, and it greatly benefits from the narrower focus—gratefully taking a break from the Danaerys storyline.  Jon’s storyline at the Wall is also given the week off, which means most of the action takes place with Ned Stark in King’s Landing.

More breathing room means more time for the plots and characters in King’s Landing to develop.  Varys and Littlefinger have gone from corny lords to VIPs of intrigue and mystery.  The pair may be both slithery and sexless, but their machinations seem to be motivating the entire plot.  The bigger picture, if you would.

And when the far-flung plotlines (The Wall and the Dothraki) are cut, the bigger picture becomes so much clearer.  Imagine that.

Ned Stark steals the show.  How can you not love this guy? Sean Bean basically brings the same humanity he brought to Boromir in Lord of the Rings, but combines it with the sympathy of Faramir.

And as evidenced in my last paragraph, Game of Thrones’ impact upon nerd-culture cannot be overstated.  In a movie landscape where the Marvel Cinematic Universe and Star Wars Episodes VII – IX are dominating the box office, HBO’s epic fantasy has outshone them all.  TV > Movies?

But, anyways, Ned Stark, what a guy.  He’s intent on doing the right thing, even though everywhere he turns, everyone else is doing the wrong thing.  His old friend King Robert abuses his royal power, while schemers like Littlefinger and Varys are playing a long-con chess match that could result in far more casualties.

The only thing Ned can trust is his own sense of honor, which has helped him enjoy a long and comfortable rule up North.  Yet he ends the episode bleeding in the street after a fight with Jaime Lannister, so you tell me what honor will get you in the political sphere.

Danaerys gets a much-needed rest, but she comes up in one of the episode’s central scenes.  She has been so disconnected from the rest of the show that when the other characters merely acknowledge her existence it comes as a thrill.

King Robert, now aware that the young khaleesi is pregnant (Varys reveals that Ser Jorah Mormont is operating as a spy for Westeros), wants Danaerys Targaryen dead.  Ned wants no part in these dirty deeds, and quits his position as Hand of the King.  Their argument—along with input from the Small Council—is better than any monologue given this season.

Another great dialogue comes between King Robert and Cersei, as the husband and wife share a drink and a laugh when they conclude that the unity of the entire Seven Kingdoms is held together by their loveless, sham of a marriage.

Of course, there are some rudimentary sexposition scenes thrown in for good measure.  In case you are wondering the meaning of the portmanteau term, Thrones combines sex with exposition so the viewer pays better attention.  A cheap trick from Mssrs. Benioff & Weiss.

In Winterfell, Ros and Theon go doggy (seems to be the preferred position on this show) and remind each other of their origins, while also reminding the viewers that they exist.

Down in King’s Landing, Ser Loras Tyrell goes down on Renly Baratheon.  The “Knight of Flowers” tells Robert’s younger brother that he would be a far better ruler.  Call it inclusion, but call it what it is—homosexposition is a new low point.

The narrower focus allows “The Wolf and the Lion” to unfold at a more natural pace.  Meanwhile, the spurts of action showcase Thrones’ high-floor potential.

Tyrion gets his first kill as he and Lady Stark are ambushed by barbaric hill tribes.  We also get a tension-filled jousting match, which is the closest thing to a sports scene we’ll ever get on this series.  However, only a Thrones sporting event would end with the decapitation of a horse.

The episode’s final scene—a duel between Ned Stark and Jaime Lannister over Tyrion’s wrongful arrest by Catelyn—is the best cliffhanger Thrones has left us with.  Just as he was about to leave forever, Ned’s sense of honor has left him stranded in the capital with a severely wounded leg.

That’s actually good for us, because, as “The Wolf and the Lion” proves, the more time we spend in King’s Landing, the better.

-There may be homosexposition, but don’t worry bros, there are still more tits than dicks in this episode.  Praise be the old gods and the old new!

-Arya, whilst chasing cats through the dungeons, overhears Lord Varys and Illyrio Mopatis (the man who arranged Danaerys’ marriage in the pilot) having a telling conversation about the safety of Ned Stark’s life, former Hand Jon Arryn’s death, Lannister treason and a possible Dothraki invasion.

Of course, Arya being Arya, she fumbles her words when she tries to tell her father.  The real thing to be taken away here is that Varys is possibly a secret Targaryen loyalist.  As Littlefinger deduces, Varys does hail from across the Narrow Sea.

-Catelyn, who has arrested Tyrion for the attempt on Bran’s life, is taking him to her sister, Lysa Arryn (Jon Arryn’s widow), in the mountaintop fortress of the Vale.  Unbeknownst to Catelyn, Lysa is now a loon who still breastfeeds her 12-year-old son (tits?)

-It seems only a few days has gone by in King’s Landing, while Catelyn and Tyrion’s trip to the Vale must have taken about a week.  Tally up the total Thrones timeline at roughly 3 months 1 week.

“Your mother was a dumb whore with a fat ass, you know that?”

Game of Thrones S1E5: “The Wolf and the Lion”