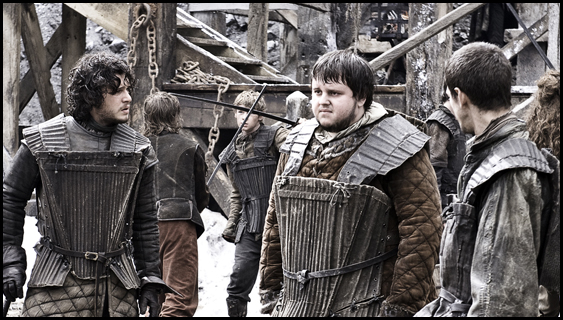 It’s hard to like an episode called “Cripples, Bastards and Broken Things.” Aside from the title, the plot hits a bit of a lull and the sexposition is a bit insipid.  In other words, this is the type of early season one episode I was expecting.

With the first three episodes, Thrones introduced us to epic world-building.  “Cripples, Bastards and Broken Things” is world-building on the world-building—essential technical details that are as necessary as they are boring.

I’m selling the ‘sode short, though.  Thrones is a magical world of tits and dragons—every second spent here is a fascinating escape from reality.  “Cripples” deepens the characters and gets them into position—this is your standard Game of Thrones piece-moving episode.

Ned dodges political alliances in the capital, while his wife embarks on a political mission of her own.  Though their morals be good (*spoken in pirate voice), their heads be thick.  If Thrones is hinting at anything, it’s that ethical codes aren’t worth a damn in the cutthroat world of George R.R. Martin’s fantasy.

Ned and Tyrion are our most interesting characters, while Jon Snow is in our most interesting locale.  Characters like Cersei, Danaerys and Robb are starting to emerge but still need time to develop.  New guys like Samwell Tarly, Littlefinger and Grandmaester Pycelle are coming across as corny.  And old faces like Viserys Targaryen will forever be an Achilles’ heel.

Viserys’ lengthy sexposition scene with a Dothraki prostitute is by far the worst of the episode, and one of the most gratuitous in the entire series.

The good thing—well, I think it’s a good thing, depending on what you want from Thrones, you may disagree—is that piece-moving episodes like “Cripples” operate at a more relaxed pace.  Tyrion’s stop at Winterfell allows him to share a tender moment with young Bran, while Ned Stark discovers more about King’s Landing’s seedy underbelly as he digs deeper into Jon Arryn’s mysterious death.

The bad thing about a piece-mover like “Cripples” is that it can sometimes feel like a stalling tactic.  The expositional monologues aren’t as tense (“There was Ghiscar and Valryon, Vermithrax, Essovius…”), while the origin stories aren’t as engrossing (Theon Greyjoy and the Clegane brothers).

That doesn’t stop me from enjoying another hour in Westeros.  The good far outweighs the bad, and the bad isn’t all that bad to begin with.  The title is probably the worst part.

-Ned Stark uncovers several secrets (like King Robert’s bastard child) but he isn’t being too secretive about it.  Grandmaester Pycelle tells him that Jon Arryn had been repeating “the seed is strong” before his death.  Arryn had also been reading a book, The Lineages and Histories of the Great Houses of the Seven Kingdoms.

-Samwell Tarly and Jon Snow have an unlikely bromance brewing up north—the Bastard and the Fat Man.  Stay tuned…

-The Wall remains the most interesting locale because, well, it’s a freakin’ 700-foot tall magical ice wall in the freezing cold.  Ser Alliser Thorne’s monologue about what can happen north of the Wall is particularly riveting.

-We begin the episode with Bran dreaming of a three-eyed raven beckoning him through the crypts of Winterfell.  Stay tuned…

-Theon Greyjoy, who will become a more important character in season two, has never been one of my favorites.  Both Tyrion and Jaime Lannister view him with disdain.  He is the son of Balon Greyjoy of the Iron Islands, who started a foolish mini-rebellion in the aftermath of Robert’s Rebellion.  The Greyjoy fleet was easily crushed, and Theon was taken as ward of House Stark as punishment.  He has lived in Winterfell (about the same age as Robb) with his “captors” ever since.

-How about another war story? Jaime reminisces about Thoros of Myr and his flaming sword.

-Too bad Joffrey wasn’t the one getting jousted in the jugular, blood spurting from the neck.

-A reference to the Faceless Men, showing that Thrones writers Benioff & Weiss have things planned out years in advance (thanks to Martin’s books, of course).  The Faceless Men plotline will be followed through in season five.

-This means it took Khal Drogo’s Dothraki horde just as long to make it from Pentos to their home city of Vaes Dothrak.  Nearly three months to traverse the much larger continent of Essos heading from west to east.

“I have a tender spot in my heart for cripples, bastards and broken things.”

“The next time you raise a hand to me will be the last time you have a hand.”