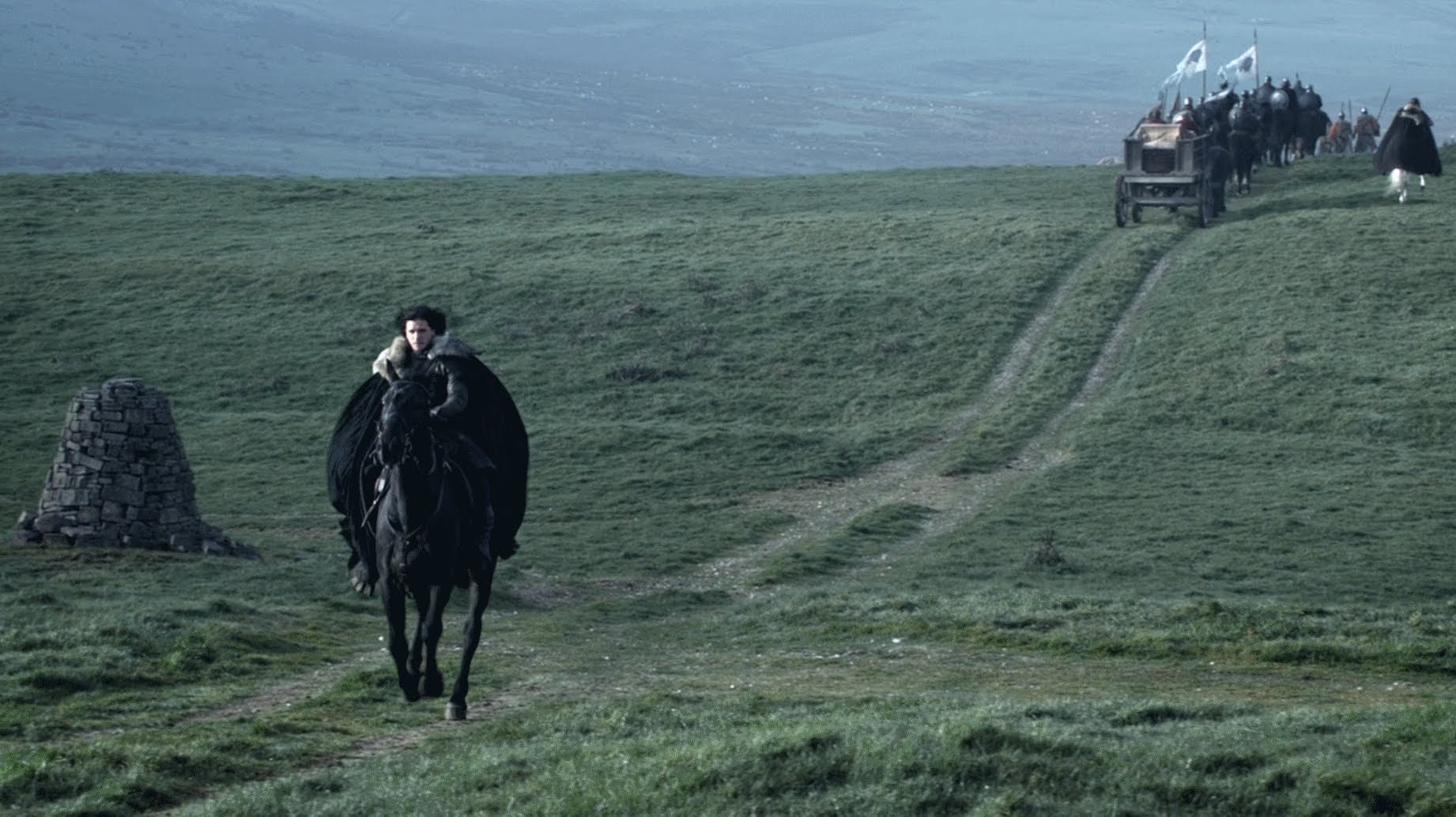 The King gets what the King wants, and Ned is finding out that his Northern honor isn’t worth much outside of Winterfell.

“The Kingsroad” isn’t intent on making a splash like the series premiere.  No Mortal Kombat White Walkers delivering gruesome “finish him” moves.  Instead, the episode is intent on getting the characters moving.  That’s the key ingredient to most epic fantasy sagas—the characters must be always trying to get somewhere.  I’m pretty sure Aragorn spent the entire Lord of the Rings on horseback.

Jon Snow, the honorable Lord Stark’s bastard child, says his heartfelt goodbyes to his half-siblings before departing Winterfell forever to join the Night’s Watch with Uncle Benjen.  “Taking the black,” pretty boy Snow calls it.  He will journey north to the Wall.

Ned Stark, along with his two daughters, is making the long journey south with the King’s entourage back to the capital.  I like to keep track of the wonky timeline of this series, and I’d estimate that a trip from Winterfell to King’s Landing would take about a month.  Yeesh.

Across the Narrow Sea, Danaerys and her new hubby, Khal Drogo, are heading back to the grassy Dothraki homeland, having plenty of sex at every stop along the way.

The stories are all starting to diverge, and that’s a good thing.  Characters are separated, alliances are starting to form and viewers are forced to make choices.

The only character who comes fully formed is Ned, our honorable hero.  Others like Tyrion, Jon Snow and Arya are just starting to become endearing.  The acting goes a long way in an exposition-heavy episode like this, and Peter Dinklage is turning in a career performance (even better than The Station Agent).

Tyrion is somewhat an audience surrogate—a modern man trying to make the best of a cruel, cruel world.  He’s travelling to the Wall with Jon Snow just so he can piss off the edge of the world.  Tyrion is full of wit and positive charisma despite being a dwarf (and the shame of his proud family).  He helps us (and Jon Snow) to see that the Night’s Watch brotherhood is actually 70% rapists who were given the choice between castration and “taking the black.”

“Most choose the knife,” Tyrion tells a dejected Jon Snow.  And Jon Snow is the most dejected man in the Seven Kingdoms.

The Game of Thrones aesthetic is seasonal rather than episodic.  That’s some #TVtalk, but what I mean is that you’re not going to have any standalone episodes in Thrones.  The season as a whole speaks on behalf of the larger context.  Sort of like The Wire, I guess.

Likewise, the disparate plot threads in each episode don’t always match up thematically.  Danaerys is learning how to have hot, nasty sex and tame the savage Khal, while Catelyn Stark is unraveling a medieval noir involving the Lannisters, a steel dagger and her comatose son Bran.  Not exactly hand-in-hand…

Sure, it’s a storytelling model that disobeys the laws of Prestige TV, but it’s damn entertaining.  Locale-hopping is a terrific rush when the locales are this interesting.  And the carnal nature of the series’ worldview even makes Baltimore, Maryland, look trite.

A Song of Ice and Fire author George R.R. Martin gifted Thrones co-creators David Benioff and D.B. Weiss with a Bible’s worth of backstory.  So many crucial events happened before the start of the show that it seems almost impossible to have all that history built in (I smell spin-off).  But “The Kingsroad” does a great job at unloading exposition in a natural manner.

Thrones’ deadliest weapon is the monologue, which adds tremendous color and background to the character delivering it, while also seeming part of an organic discussion.  It’s not speechifying if the acting is superb, which it usually is on this show.

Queen Cersei tells Catelyn Stark of her emotional past, and actress Lena Headey is able to justify being a stone-cold bitch for the rest of the episode.  Likewise, Tyrion lets Jon Snow know why he is so snarky, and you can tell Peter Dinklage believes every word of it.

If there is a theme though, it’s that duty and honor isn’t always enough.  Ned Stark is finding that out the hard way.  His code of morals has no place in the big, bad world of Westeros.

But that’s what is immediately appealing about this show—the big, bad world of Westeros.  There’s never been a fantasy saga quite like it.  “Fuck” and “cunt” and graphic death-via-dire-wolf and lesbian sex.  Maybe it’s all just macho-erotica, but it makes for a fictional experience like no other.

Game of Thrones has done for the fantasy genre what The Dark Knight did for the superhero genre—revolutionized it.  “The Kingsroad” is just a small step along the way.

-Another effective cliffhanger involving Bran—this time the episode ends with him waking up from his coma, just as his father Ned is killing Sansa’s dire-wolf many miles away.

-The despicable Prince Joffrey is the character you’ll love to hate.  If only Arya had slit his throat then and there! I’m not even exaggerating!

-Ser Jorah Mormont, who was exiled from Westeros by Ned Stark for selling slaves (?), is serving as a guide for Danaerys and her brother Viserys.  He tells Dany a bit of Dothraki lore—the apocalypse will come when the tall stalks of ghost grass from the Shadowlands of Asshai spread and cover the world.  Sounds similar to the Long Night and the White Walkers, no?

-Robert’s Rebellion occurred 17 years before the start of the show.  He overthrew the Mad King Aerys Targaryen (father of Viserys and Danaerys), the war ending with Ser Jaime Lannister literally stabbing the Mad King in the back.

-A subtle focus is made upon the identity of Jon Snow’s mother.  Ned rides off, vowing that the next time they see each other, he’ll tell him of his parentage.  “You might not have my name, but you have my blood.”

-The scene where Danaerys’ handmaiden teaches her how to pleasure the Khal is crucial for her development into an independent woman, I guess, but it serves no substance other than the titillation factor.  This is sexposition at its finest.

“The next time we see each other, we’ll talk about your mother.”

“Bessie, thank the gods for Bessie.  And her tits.”

Game of Thrones S1E2: “The Kingsroad”