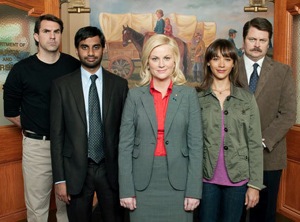 So, you want to remake The Office, huh? First, get Greg Daniels to write/direct the pilot (and get another Office/SNL alum, Michael Schur, to serve as showrunner).  Next, find your own Scranton, Pa. (Pawnee is OK but I’ll be damned if I can name one defining trait of Indiana).  Put an emphasis on the mockumentary aesthetic (there’s nothing like talking to a camera for some easy exposition).  Finally, find your Michael Scott (Amy Poehler’s Leslie Knope tries a little too hard, but I’ll be damned, she too is OK).

Nothing much is accomplished in the pilot, but Parks and Rec shows potential—even though it begins its run as the biggest copycat in NBC history.  This is a network sitcom pilot; they’re supposed to be lackluster.  Look at Community, look at Arrested Development.  Hell, look at The Office itself.

Even though there are a bunch of terrible jokes, Parks and Rec isn’t all that bad.  I’ll repeat—this is a network sitcom pilot.  If the terrible jokes continue all season, however, there’s gonna be some problems.

A step-down, maybe a couple.  “Canvassing” doesn’t give anyone other than Leslie Knope much to do, and that is a bad thing because, at this point, Leslie Knope hasn’t handled the spotlight well.  She crashes and burns during a public forum, as do many of the jokes throughout the episode.  The only bright spots were Aziz Ansari and Chris Pratt, probably because I know what they’ll turn into.  I know what Leslie (and Parks & Rec) turns into also, but that doesn’t mean she—or the show—started in a likable position.

I thought this one had some better laffs than the first two episodes, believe it or not.  The characters are becoming a little more individualized—aside from lead character Leslie Knope, who remains a silly caricature.  Still, Parks is starting to show potential, especially in terms of storytelling.  The main plot may even be better than the surrounding humor, but that’s not really saying much.

Parks and Rec has got its head in the right place, which is good.  Leslie Knope aspires to be an independent woman, at the dawn of the Obama Era, no less (season 1 aired in 2009).  Her desire to be accepted into the titular ‘boys’ club’ finds her building some chemistry with the supporting male cast, including her mustachioed boss Ron Swanson.  Even though this is the series’ funniest episode yet, it isn’t OK that Parks’ face of feminism shares more in common with Sarah Palin than Nancy Pelosi.  And she isn’t even as funny as Palin.

Leslie Knope tries hard to be what she’s not, and she’s trying too hard to be Michael Scott.  Parks and Rec, likewise, is trying too hard to be The Office.  The cast is very talented, as are the writers/directors behind the camera, but the formula hasn’t come together just yet.  Do I care for Leslie, or any of these characters? In truth, no.  Only Rashida Jones’ Ann deserves any sympathy so far.

Series creator Michael Schur directs “Rock Show,” the saving grace of season one of Parks and Recreation.  Suddenly, the jokes aren’t hit or miss—they hit.  Suddenly, Leslie Knope isn’t just a caricature—she is a real, likable character.  Suddenly, The Office is in the rearview mirror—and that’s the most important thing of all.  This is where the potential of P&R is realized, not fully or completely, but enough to know this could be a high-caliber show moving forward.

And, of course, with the benefit of hindsight, I know “Rock Show” is a major turning point in the series.  Parks and Rec was not particularly great, or even good, during its shortened debut season, but “Rock Show” is an episode that points to the greatness to come.  Which will start immediately in season 2…