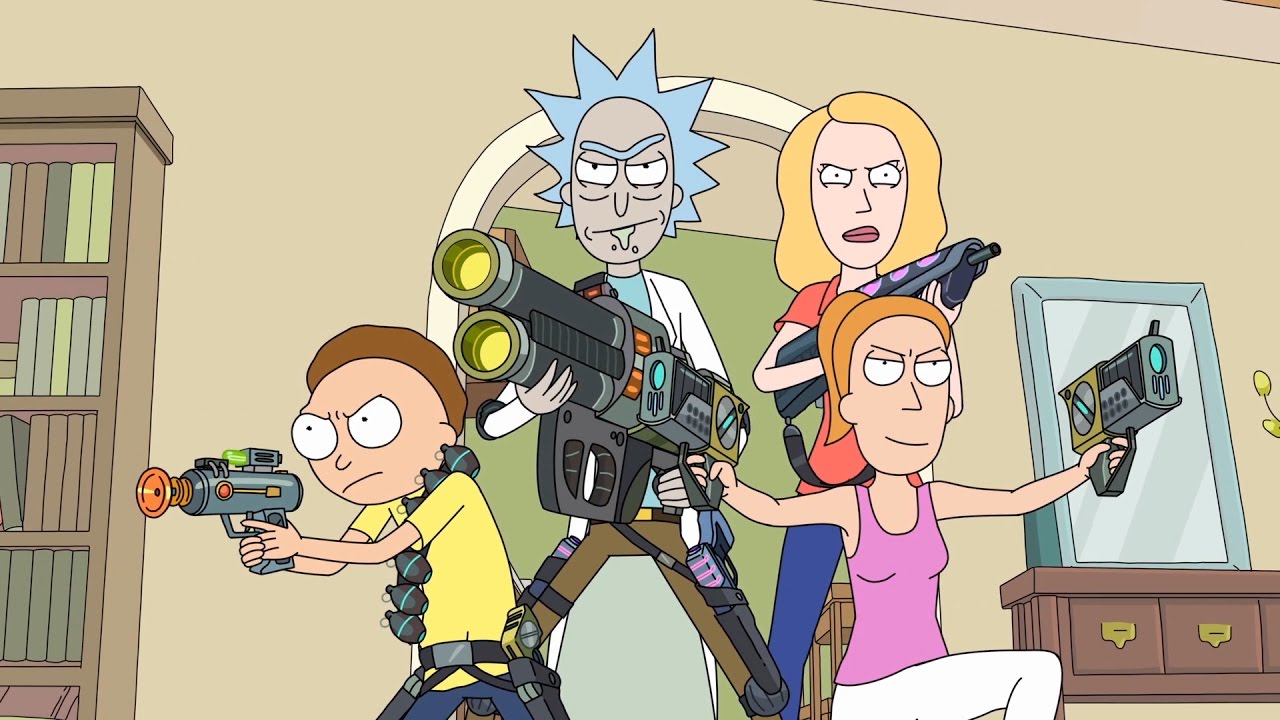 Rick and Morty makes its triumphant return in a fractured episode, both literally and figuratively. “A Rickle in Time” features the most ambitious concept that creators Dan Harmon and Justin Roiland have yet attempted: Rick, Morty and Summer accidentally split into 64 simultaneous realities while trying to become unstuck in time. On the TV screen, 64 different Rick, Morty & Summers scramble to survive in a world of Schrödinger’s cats. struggle with trying to unfreeze time, and accidentally cause their reality (and our TV screens) to split into 64 different Rick, Morty and Summers, all scrambling to survive in a world of Schrödinger’s cats.

The season two premiere is a visual marvel more than anything else. With multiple realities playing out onscreen at the same time, the writing will eventually become disjointed. This is an episode with real heart and optimism, a rare occurrence in Rick and Morty, but it’s a little clunky getting there.

Nevertheless, “A Rickle in Time’s” sky-high ambitions end up hitting the mark more often than not — great jokes with great meaning. Not to mention the extraordinary animation.

(Additionally, the episode suffers from a weak B-plot with a hyper-annoying Beth. “A Rickle in Time” tries to turn the weakest character of season one into a token independent woman, but ends up turning her into a bigger bitch than ever before)

In the season premiere, we got multiple realities; in its follow-up, we get multiple Jerrys. And quite honestly, multiple Jerrys is the better deal, even if it’s only supposed to be the B-plot. Season two of Rick and Morty has already proven to be far more ambitious than the first, which initially seemed an impossible task.

“Mortynight Run” is another win for Morty’s idealism, having to make a tough decision regarding a David Bowie-esque terrestrial entity named Fart. There’s some real emotion in this episode (especially in the scene with Roy, a virtual reality game at Blips & Chitz).

Rick’s been a real asshole through these first three episodes, and he’s actually becoming less funny as a result.  By episode’s end, nothing much changes — I don’t find his attempt at suicide to be as meaningful as intended. Rather, it’s just another deep shot at prestige that misses the mark.

Meanwhile, Rick and Morty B-plots are devolving into a “Beth and Jerry have the worst marriage ever” standard, which is detrimental to both of their characters.

Not my favorite episode — even the hive-mind Unity (a sentient entity that takes over a planet’s population and controls them all simultaneously) is perhaps overselling Season Two’s ‘multiple perspectives’ main theme. But at least we got a Community reference…

Rick and Morty is often at its best when it is at its most surreal — zany, absurd and hilarious. And “Total Rickall” is Rick and Morty at its absolute best.

A parasite has infested the Smith residence, planting fake memories and manifesting itself as lifelong friends/family members. Every time someone has a “flashback,” the parasites reproduce into increasingly strange, new characters. It’s a stream-of-consciousness affair with a sentimental touch — the ability to look back fondly on bad memories. And I sincerely hope this isn’t the last we’ve seen of Mr. Poopybutthole, who has always been there for us.

A rare throwaway — it feels like it could have been the pilot, and I mean that in a bad way.

“Get Schwifty” is zany and absurd, but for all the wrong reasons. Cramming an unhealthy amount of jokes and attempted zingers into completely random storytelling — not in the series’ usual, off-the-cuff fashion — this episode is by far the show’s wors. For the first time ever, Rick and Morty is trying too hard.

Sure, there are a few laffs, but this almost feels like a completely different series — late-night Adult Swim trash. Perhaps Dan Harmon and Justin Roiland just wanted an excuse to coin a phrase and make a rap song?

This is Rick and Morty’s most atheistic episode yet (not counting the “Fuck you, God!” from the season premiere), which means it is also the angriest — I guess Rick really is an asshole just to be an asshole.  Successful prestige trick: lead character must be likable and dislikable at the same time.

The episode’s gimmick is that Rick is now attending high school with Morty and Summer. The gimmick works because it subtly examines depression (Rick’s depression, no less), and begins to unlock what this show is really all about.

Rick and Morty is a character study as much as a comedy, competing with Bojack Horseman for best and most prestigious animated series on TV. However, the B-plot is another “Beth and Jerry have the worst marriage ever” retread, which is getting very tiresome.

As Rick says at the beginning, “We basically nailed it the first time.” He’s right: “Rixty Minutes” is one of the best animated TV episodes in recent memory. For the sequel, Roiland and Harmon are just here to have fun. Nothing wrong with that, especially when all the fun is unscripted. The concept of interdimensional cable TV allows for an infinite supply of jokes. Even though the formula is familiar, this is another great example of Rick and Morty’s unparalleled style of humor.

Crazy shit. Dark and cynical shit. Rick and Morty may be the most cynical show on TV right now, animated or otherwise. But this is the episode that had me laughing the hardest…

“The Wedding Squanchers” features the best writing of Rick and Morty’s sophomore campaign, driven by an exciting, high-stakes plot and a knack for surreal knee-slappers. Along with “Look Who’s Purging Now” and “Total Rickall,” this episode had me laughing harder than any other. Antihero Rick builds up valuable dramatic heft as he sacrifices himself for the safety of his family, ending the season with a successful cliffhanger. Maybe Rick can finally learn to love his family after all…from the cozy confines of an intergalactic prison cell.

Lastly, I am thankful for the return of Mr. Poopybutthole. It’s good to see a familiar face.