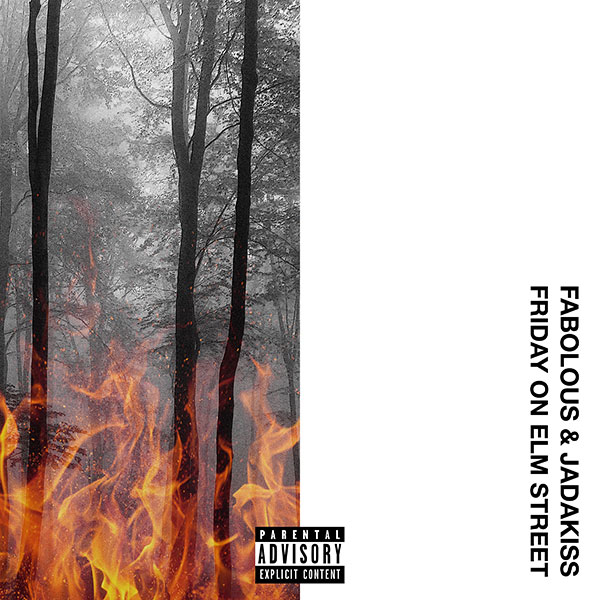 Any day of the week on Elm Street is shitty.  Friday’s are no better than Monday’s.  Jadakiss kinda sounds like Freddy Krueger, but that isn’t enough to earn this duo’s horrorcore credentials.

Not quite a dynamic pairing here.  Fabolous and Jadakiss are “feature” guys.  Better off in better rappers’ songs, much less their own, awkwardly sharing tracks with each other.  Limited interaction may work in their favor, but it certainly detracts from the Hip-Hop Cohesiveness factor.

Fabolous is the better rapper, what with his smoother and more lyrical flow (guns, puns and all).  Jadakiss rasp-raps through his designated portion of each song.  If the pair went balls out with the horrorcore motif (“Kill/kill/kill”), then Jadakiss would be better utilized.  Instead, the pair go half-assed into everything—horrorcore, hardcore, Mafioso rap, Elm Street, etc.  Even the Future feature (“Stand Up”) finds the ATL trapper leanin’ a little too heavy.

Fabolous (Freddy) and Jadakiss (Jason) rap about murdering their haters and stealing their drugs and then selling it to junkies and then killing the junkies and burning the bodies.  Except it’s not even as interesting as that.  There’s not even a drip of sexuality to compliment the braggadocio.  What’s hardcore hip hop without fucking? I’ll tell ya: nothing.  It’s a psychological problem, that’s what it is.

Two rappers going half-assed doesn’t make a whole, and they’d need more ass than that anyways to make these songs interesting.  No over-the-top imagery or shock humor makes this a dull affair—someone put these misguided hoodlums behind bars! or something like that.

With two voices on the cut and two pairs of eyeballs glancing at the dolla $ign$, it’s no wonder why this would be a halfhearted effort.  When you only go halfhearted with murder lyrics, then you’re bound to have a mess on your hands, whether it was your fault or the other guy’s.  And when you go halfhearted into a 2017 call-to-arms (anti-election “Talk About It”), then you’ve lost all credibility.

Fuck it, end with a remix of track number three because we half-assed at conceptualizing too.  Fabolous and Jadakiss, sorry fellas, but there’s no bangers amongst the beats neither.  Good luck with a hit off this one.  Come back to Elm Street on Saturday.