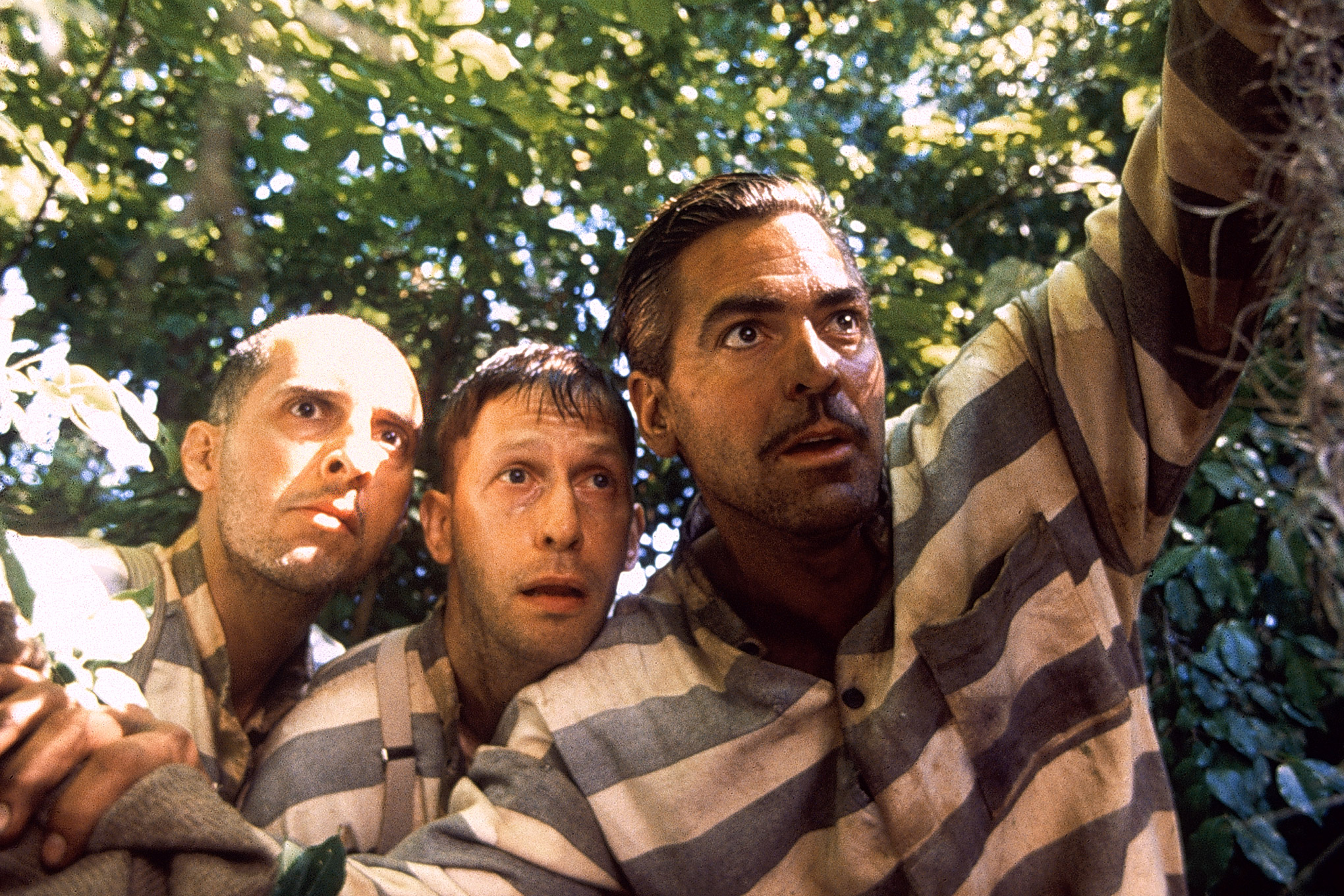 Written, produced and directed by Joel and Ethan Coen

Based on “The Odyssey” by Homer

Certain directors’ works warrant a longer look.  The Coen brothers are two of my favorite filmmakers, and yet I still think they are somewhat underrated.  This is a longer and more in-depth look at something worth talking about—the song-filled O Brother, Where Art Thou?

This is not a typical review, then.  It’s more of an in-depth analysis, complete with spoilers, speculations and opinions.  A deep dive, if you will.

Goofy and beautiful; funny and incredibly moving—O Brother, Where Art Thou? finds the Coen brothers providing some of their finest visuals to one of their most playful stories.

It’s not even their story, traditionally.  A lot of inspiration comes from a certain blind Greek poet, and the opening epigraph indeed quotes the first lines of The Odyssey.  The Coens have retro-updated Homer’s epic to 1930s Mississippi, with the focus on a group of chain-gang escapees, led by the silver-tongued Ulysses Everett McGill (George Clooney).

Like the Odyssey, O Brother is episodic in nature.  The plot, then, is Coen-esque by nature: concurrent threads involving a hit song by an alias band (“I am a Man of Constant Sorrow” by The Soggy Bottom Boys), a local populist election, notorious bank robber George “Babyface” Nelson, legendary blues singer Robert Johnson and possibly the Devil himself all intersect in satisfying ways throughout the film.  But not quite as satisfying and clever as other Coen films…

The episodic nature makes it hard to derive initial meaning from the film.  O Brother says plenty about religion, race and ol’ Southern values, but only from scene to scene.  Like its ancient source material, it’s one adventure to the next, with plenty of varying tones.  Seduced by sirens one minute, slapstick toad comedy the next.

Looking back through George Clooney’s filmography, I’d have to rank his performance as Ulysses Everett McGill at or near the top.  He probably does better work overall as Michael Clayton or Danny Ocean (or Mr. Fox), but it is in O Brother where Clooney has an overall aura of fun around him like never before.  Even though he doesn’t shut up once the whole movie, his character only grows and grows on you.

Sadly, the same can’t be said about Delmar or Pete.  They garner some laughs from their sheer stupidity, but the shtick doesn’t hold up by the end of the film.  Naïve idiocy their only output, they ultimately are one-dimensional characters that live to serve Everett.

Clooney does a fine job carrying this picture.  The Coens know that the esteemed actor excels at portraying an intelligent-but-dull, thinks-he’s-smarter-than-he-is clueless type.  They perfect Dumb Clooney in the severely underrated Burn After Reading, but also make great use of him in the more recent Hail Caesar!

O Brother is where Dumb Clooney first began.  As is often the case with Clooney, the dumber the better.  He’s at his best here.

The Coens had tried their hand at “Coen Bros. Lite” in the past—the screwball comedies Raising Arizona and The Hudsucker Proxy—but the 2000s were when the Coens truly doubled down as great dramatists and great comedians.  Fresh off the heels of their funniest (and greatest) film, The Big Lebowski, Joel and Ethan dove headfirst into less serious, loopy affairs.

Which isn’t to say that the formula was perfected yet.  2008’s Burn After Reading is where all the elements—the comedy and the Coen-esque—coalesce perfectly.  In O Brother, the plotting is somewhat sloppy; one adventure to the next, as I said before.

Even though many of the individual scenes are masterful—the mass baptism, the surreal sequence with the sirens, the ominous KKK rally, the great flood at the end—the whole can feel somewhat empty.  The police on their tail adds some continuity, but it isn’t until Ulysses returns home late in the film that the story finally has a semblance of a goal—estranged wife Penny is considering marrying another man. (“He’s bona fide!” “He’s a suitor!”)

There are several enjoyable touches that make the directionless plot a non-issue.  First, there’s the look.  By that, I mean the fabulous mise-en-scène.  The Coens turn the Depression-era Mississippi Delta into a painterly pastiche.  A slight sepia tone gives the film a desirable old-time quality—dusty and of the earth.  Several scenes take on the ambiance of Cool Hand Luke.

Then, there is the film’s sound.  O Brother places a large focus on music, with the (Grammy-winning) soundtrack telling the story better than the actual story sometimes.  The song selection ranges from gospel to bluegrass, Delta blues to folk, old negro spirituals to Primitive Baptist choruses.  The tunes carry the picture just as much as Clooney’s performance, who is not really singing, by the way.

Throughout the film, the boys are pursued by the police, including a deep-voiced sunglassed sheriff with a hound by his side.  Robert (“Tommy” in the film) Johnson describes him as the Devil he sold his soul to at the crossroads.  Fire dances in the reflection on his dark shades.

With all the abundant Biblical imagery and references throughout, it’s no surprise that the Coens would stick Satan in there too, personified by a darkly-comic prescient Sheriff of Darkness.  In fact, his scenes are among the funniest in the whole film, despite the small part he plays.  He strikes the fear of God into the godless Everett McGill.

On a related note, it’s difficult to know what this film is trying to say.  One scene satirizes baptism, while the grand finale features a Great Flood deus-ex-machina that seems to be an act of God.  A blind seer early on in the film prophesizes what will later come to pass.

At the end of the film, after they have evaded death, Everett muses on the changing times: “Yessir, the South is gonna change.  Everything’s gonna be put on electricity and run on a paying basis.  Out with the old spiritual mumbo-jumbo, the superstition and the backwards ways.  We’re gonna see a brave new world where they run everyone a wire and hook us all up to the grid.  Yessir, a veritable age of reason.  Like they had in France.  And not a moment too soon…”

He then sees “a cow on the roof of a cotton house,” and rethinks it all.

If anything, O Brother is a tall tale of the era depicted onscreen: the American South toward the end of the Depression.  Every vignette is an amalgam of folk myth and culture satire, entertaining if not exaggerated.

The first scene of the film, in a tint more sepia than the rest, depicts a chain-gang busting rocks in the baking sun.  All the men are black.  The final scene shows the blind seer from earlier, also a black man, continually pushing his lonely handcar down the tracks.  Everett’s young daughter watches for a moment before she is pulled away by her mother.  The seer continues onward, as the film fades to black and white—ending O Brother, Where Art Thou? in an entrancingly ambiguous way that only the Coens can pull off.

The final scene turns O Brother from a comedy of errors to a film that you can ponder for days, such is its power.

Underneath it all, I believe the Coens may be saying that some things will never change.  Racism will always be a part of the South, and America.  The KKK rally depicted in the film is both humorous and ominous, alien but real.  And when the town’s Populist candidate (Homer Stokes, played by Wayne Duvall) is revealed to be the KKK Imperial Wizard, he is quickly vilified but forgotten about even quicker.  In fact, his political downfall is more due to the fact that he was badmouthing the Soggy Bottom Boys.

This is a minor work from two major artists, but that doesn’t mean it loses any value.  The film is highly entertaining and never boring, and it probably features one of George Clooney’s greatest performances, whether Clooney fans agree or not.

Add on the stunning visuals and first-rate ending, and you have yourself a thoughtful, well-put-together farce.

This may only be Coen Bros. Lite, but you can still get drunk off the stuff.