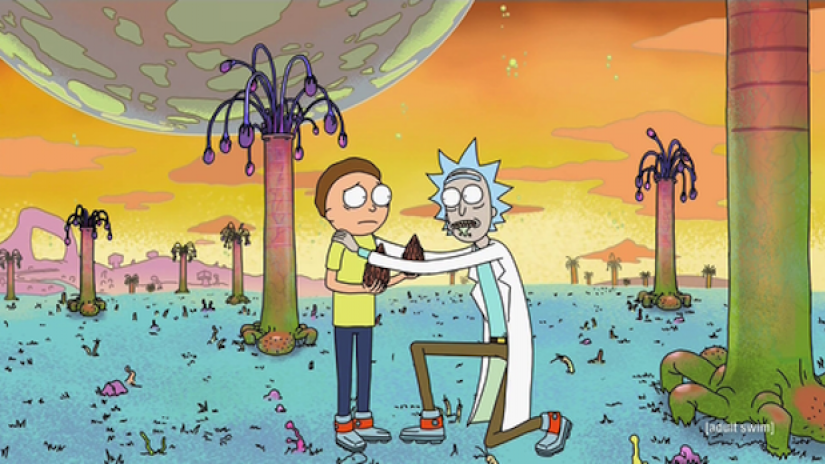 The improvised nature of the dialogue, the crude yet imaginative animation, the high-concept storyline — the only aspect where Rick and Morty falters is its handling of the secondary characters. The at-home sitcom nature of Jerry (father), Beth (mother) and Summer (sister) is somewhat at odds with the infinite, zany possibilities provided by Rick (genius scientist grandpa) and Morty (dimwitted but lovable grandson). Nevertheless, this is a pilot that sets a high bar — the absurdity of late-nite Adult Swim combined with the smart, meta-hilarity of The Simpsons. Even contains touches of Community, co-creator Dan Harmon’s other TV show. Though I’m not sure if I love it like those ones.

Rick and Morty is a show full of endless possibilities thanks to its super-cynical and super-scientific lead character. Two extremely funny and well-written plots — 1) a semi-spoof of Inception, and 2) sentient dogs taking over the Earth. Creators Justin Roiland and Dan Harmon have really got something here. This has cult classic written all over it.

Rick and Morty is fun, even when it’s not funny, which is expected of a great animated TV show. “Anatomy Park” finds Morty going on a Spielbergian adventure inside some old hobo’s decaying body, while the B-plot featuring Jerry and the rest of the family is just as solid despite not featuring any sci-fi shenanigans.  The greatest strength of this particular Rick and Morty episode is not its humor, but in its ability to balance the fantastical with the humanistic. Tough to do, even for a great animated TV show.

Another great, complex plot that seems too smart for an animated TV series, yet is a high-concept only befitting an animated TV series. Rick and Morty find themselves captured by aliens and trapped inside simulations within simulations, offering up both mind-fuckery and meta-jokes. Jerry finds his way into the aliens’ simulation, and it ends up bringing out the best aspects of his character. In fact, his is the episode’s funniest storyline. Rick and Morty is intelligent, but it knows how to stick to a tried-and-true sitcom trope: solid A-plot with solid B-plot.

The concept of “meeseeks” (beings whose sole purpose is to complete the task for which they are summoned) and their inability to get two strokes off of Jerry’s golf game makes this the funniest episode yet. Jerry, who might be the most likable character on the entire show, finally gets the lead spotlight, while the title duo search for adventure and build their relationship in a somewhat stream-of-consciousness and unscripted manner. That element of semi-surrealism leads to the fourth-wall breaking end — a meta-awareness of the show itself and the medium it belongs to. And you know how much critics love that…

Rick’s extreme cynicism provides the show with a dark and relatable central philosophy — the universe is a chaotic shitstorm and nothing really matters. Case in point: a love potion goes horribly wrong, and our dynamic duo end up turning everyone in the world into deformed, Cronenbergian monsters. Luckily, one half of our dynamic duo doesn’t share the other’s negativity. “Rick Potion #9” is a big win for Morty’s idealism. The episode’s ending — set to Mazzy Star’s elegant dirge, “Look on Down from the Bridge” — aims for prestige. It doesn’t quite hit the mark but it is the attempt that makes the difference. How many other animated sitcoms are even aiming this high? BoJack Horseman and that’s it.

This is a minor Rick and Morty episode. The plot, while imaginative, isn’t as imaginative as previous installments. Wubba-lubba-dub-dub, amiright? Rick acts like a huge asshole this week, but the show still has its head in the right place — give the gals a chance. While the jokes aren’t as rapid-fire as other episodes, granddaughter Summer finally gets to prove her worth. Now the title of “most useless character” solely belongs to mother Beth.

“Rixty Minutes” finds creators Justin Roiland and Dan Harmon aiming for prestige and hitting the mark. Dead center. I’m convinced that this is, by far, the show’s best episode — the funniest, deepest and most aesthetically pleasing. There’s a meta-awareness to the medium of TV itself, a loose, improvisational tone, a legitimate emotional journey and several rewarding, hilarious continuities. And there’s also the elusive Magic Center, a touching moment in which the series’ core philosophy is voiced (by Morty, no less): “Nobody exists on purpose, nobody belongs anywhere, everybody is going to die. Come watch TV?”

9. “Something Ricked This Way Comes”

After the breathtaking wallop of “Rixty Minutes,” what more could you want from the best animated show currently on television? How about something a little less high-stakes? Jerry and Rick go to Pluto, while Rick and Summer have a run-in with the Devil. Sounds hefty, but these are low stakes as far as this show is concerned. Instead of looking at the harsh realities of metaphysics or examining human nature from a maximalist perspective, “Something Ricked This Way Comes” takes the time to look at these flawed character relationships. Not the funniest installment of Rick and Morty — even the DMX soundtrack warrants only a chuckle — but a necessary one for a show that has prestige ambition on its mind.

10. “Close Rick-counters of the Rick Kind”

In season two, Rick and Morty will examine the notion of infinite, alternate realities and what that says about human nature. We have viewed multiple perspectives throughout season one (“Rick Potion #9,” “Rixty Minutes”), but “Close Rick-counters” is where the this central idea is magnified. Our Rick (the One True Rick?) is framed for the murder of other Ricks in different timelines and is arrested by the inter-dimensional Council of Ricks. It’s a marvel to see this duality-ad-infinitum play out — all Ricks are fundamentally different, yet all are fundamentally the same. And, of course, with infinite, individual Ricks, there are infinite, individual Mortys.

Season 1 of Rick and Morty has been a revelation, a blessing from the Peak TV era. The finale decides to play it fast and loose: while Jerry and Beth are away, Rick and Summer throw a party. To those of us who have grown infatuated with the show because of its intelligent humor and high-stakes concepts, “Ricksy Business” is disappointing. The writing is somewhat lazy, Rick’s douchebaggery is annoying and the expletives are piercing. It’s a house party episode, muthafucka!!

We get a decent cliffhanger (the Sanchez residence frozen in time), and we end by busting open the fourth wall (“That’s season one, motherfuckers!”). I am already looking forward to binge-watching season two but, for the time being, let it be remembered that “Ricksy Business” took the easy way out.

One thought on “Rick and Morty S1 episode-by-episode review”