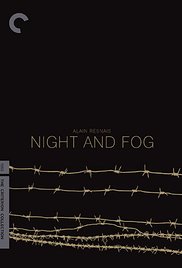 The greatest documentary of all time may just be Claude Lanzmann’s epic Shoah—a Holocaust film like none other.  Shoah is nine hours long, which is certainly how it gets its unmatched emotional heft, but can make for watching the complete film a daunting task.

Night and Fog is just as powerful as Shoah in 1/18 the time.  Directed by Alain Resnais and narrated by Michel Bouquet (from a script by Jean Cayrol), the film alternates meditative present-day in-color shots with horrific wartime black-and-white footage.  A chronological narrative is built, from the bustling beginnings of the Nazi war machine in 1933 to the nightmarish Final Solution to the liberation of the camps by the Allies in 1945.

Night and Fog is a remembrance even more than it is a documentary.  The film keeps the same tone throughout—neither judgmental nor sentimental, with no agenda.  It highlights the unspeakable atrocities, but lets the camera speak for itself.  The narrator, too, chooses to be unbiased: “The only footsteps we hear now are our own.”

The short film was released in 1956, a mere ten years after the harrowing events it depicted.  The world was now ready to move on, but it needed a concrete and uncompromising reminder that such evils did exist, so as never to forget.  Night and Fog was the first visual mnemonic of humanity’s darkest tragedy.

Yet, the film is timeless.  It could have been made yesterday, retaining all its power.  The film ends by questioning “Who is responsible?”, not only a reminder but a warning.  If there is nothing to remind, then such evil can happen again.

The best documentaries can transcend time, and Night and Fog is no exception.  It is just as relevant in 2017 as it was back in 1956.  In fact, the film could have been made in 1946 with no difference in perspective.  Its pathos applies to any point in time from the end of WWII to the present.

I know it’s tricky to talk about when dealing with a subject as delicate and tragic as the Holocaust, but the aesthetics behind Night and Fog are what make it such a powerful document.

Night and Fog was one of Alain Resnais’ first films.  He would go on to become a leftist outlier of the French New Wave, masterminding modernist classics like Hiroshima, mon amour (1959) and the #avantgardeasfuck Last Year at Marienbad (1963).

Far away from the most graphic scene, yet one that can sum up all the cruelty—the camera slowly panning over an impossibly large black-and-white mountain of human hair.

The narration, in French, is another key ingredient in what makes Night and Fog so powerful.  Jean Cayrol’s script is semi-stream-of-consciousness and elegant, not dissimilar to the Faulkneresque musings in Hiroshima and Marienbad.

The secret to the film’s greatness and relevance is that it focuses on the memory, not the history.  The narrator’s verse never gets in the way; he only adds to the power of the images.  The atonal music, too, heightens the sense of dread.

Great directors can put their own personal stamp on a documentary just like with a fictional narrative.  Night and Fog is an Alain Resnais film through and through—stately, meditative and questioning issues of memory.

Twelve years of heinous crimes against humanity comprised into 32 minutes of film, yet it didn’t need to be a second longer.  If ever you feel you need a reminder—something to put it all in perspective—then Night and Fog should be the choice.