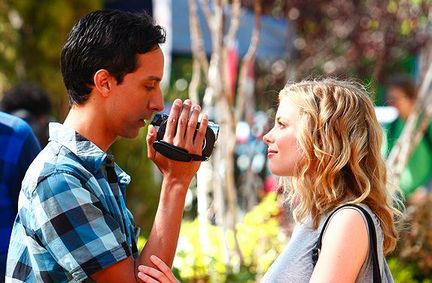 The pilot focused on getting everyone into place, the second episode relied on jokes, and in Community’s third episode, the plan here is to have a heart.

The episode’s emotional climax may approach sappy territory, but it is important to know that Community—unlike Dan Harmon’s other series—is not a cynical show.  In the end, good will win out, and it usually leads to moments of growth for Jeff and the rest.

In “Introduction to Film”, Abed finds himself caught between his love of film (and his desire to take a film class) and his father’s angry demands.  Britta involves herself in the scenario, confronting Abed’s conservative Muslim father and volunteering to pay for the film classes herself.

It’s only the third episode, but already the show is finding its niche and getting the feel for these characters.  It is very Britta of Britta that she would involve herself in a righteous cause, only to bamboozle herself so much with the extra burden that she nearly breaks down.

Likewise, it is true to Abed that he would disconnect from reality in the pursuit of making a movie.  He begins cutting class—and human contact—to make his documentary.

Meanwhile, Jeff enrolls himself in the ultimate blow-off class—his only task is to “seize the day” by Friday.  Of course, Jeff finds it incredibly difficult.

It’s from this storyline—which ties together nicely at the end with Abed and Britta’s storyline—where the episode garners its most laughs.  Community may not be cynical, but Jeff Winger certainly is.  Watching him struggle to live in the moment provides a fair amount of good jokes.  “It is not fair how hard it is for you to cheat here,” Britta tells him.  Mild hilarity ensues.

The episode’s biggest laugh comes from a monologue-style joke given by Pierce.  His lecture to Troy about the various ways to sneeze (“You can even use a sneeze to drive home a point, like, ‘I think the Cubs are gonna win it all this year’—CRRRRCCHHH!”) plays like a stand-up routine, but it contains by far the best jokes of the ‘sode.

However, it’s a shame that the writers try to build a severely minor storyline around it (Troy sneezing like a girl) when it’s so obvious that all they really wanted was the one joke.  When this C-storyline’s “resolution” occurs near episode’s end, it takes me right out of the picture.

The episode’s emotional ending—Abed’s finished film—is so on-the-nose that it garners a shock-the-room-to-silence sneeze, the old AAH-PLONTHNG-FIZZ.  In other words, it’s corny.  But it’s heartwarming, too.  Community’s learning.

The episode’s actual ending of Jeff kissing Britta, seizing the day and walking away into the campus grounds, is as poignant as a prestige drama.  Community’s got potential.

And the post-credits ending of Troy, Abed and Jeff krumping is a perfect tome of random goofiness.