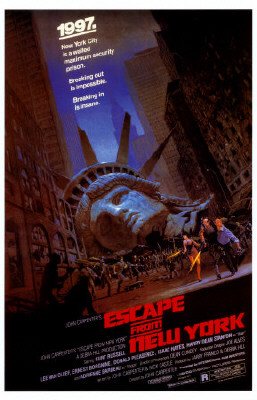 John Carpenter’s Escape from New York doesn’t cut it as an underrated cult film for me in the way that his best films do.  Assault on Precinct 13, Halloween, and The Thing were all masterful B-movies that provide real thrills and chills.  But—and this is what makes Carpenter so revered—they didn’t feel like B-movies at all.

Escape from New York does feel like a B-movie.  That’s because it is one, after all.  Carpenter displays his usual cost-cutting wizardry—writing, directing, composing, shooting at night, doling out limited speaking roles, filming in St. Louis rather than New York, etc.  But his delightful penchant for cheepnis (budget of $6 million) is the only admirable thing about the movie.

Escape lacks in story, coherence, action, and characterization.  It also plays up the cheese factor way more than the other Carpenter cult classics.  This one’s as cornball as it gets: Kurt Russell is Snake Plissken and the year is 1997 (“1997 – Now”) and the island of Manhattan is now used as a prison due to the astronomical crime rate.  A terrorist hijacks Air Force One and the President (Donald Pleasance) is taken captive in NYC.  Plissken, former-soldier-now-prisoner, is entrusted with the mission of rescuing the Prez in exchange for his freedom.  Snake reluctantly agrees and is given only 24 hours to complete the mission.

The Thing was a slow-mover in its early going, as was Halloween, but they still maintained interest and suspense.  Carpenter’s steady direction continually built up tension, while the lo-fi settings created a claustrophobic atmosphere.

Escape is cluttered from a story perspective, and Kurt Russell—despite wearing an eyepatch—isn’t as badass as he is in The Thing.  Snake Plissken simply isn’t as cool or interesting as this film needs him to be.

Carpenter provides his usual assured and semi-stylish direction, but the film feels lost and it too often falls into clichés.  The dystopian New York has an intriguingly dark steampunk flair, but the spikey-hairs who populate it are laughable.  The character motivations rely on random B-movie logic.  Snake is constantly greeted with the standard “I thought you were dead.”

That’s not to say watching this isn’t a decent way to kill an hour and forty minutes on a football-less Sunday night.  I got some good laughs, though whether intentional or not on the film’s part remains up in the air.  And Carpenter’s synth-poppy score is a saving grace.

I watched Escape from New York with my dad and we enjoyed joking about where the budget cuts might have been made, but we didn’t get too caught up in the storyline or concerned with Adrienne Barbeau’s cleavage.  Well, I guess one of those statements is a lie.

You can probably guess which one.