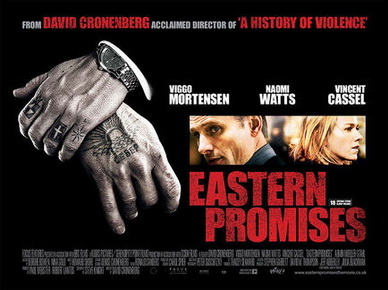 When exactly did David Cronenberg enter the rank of “elite” directors?  He never had a masterpiece, per se, but he was always very consistent.  Yet there was just something about his gory body horror that was just plain uncomfortable, so we all stayed at a safe distance.  A History of Violence came out in 2005 and that’s when the tide of critical opinion made a wholesale change on Cronenberg.  It was the mysterious/accessible Cronenberg masterpiece we all needed, enough to finally admit to ourselves that the likes of Naked Lunch, The Fly, and Crash were actually damn good films—and the likes of Scanners, Videodrome, and eXistenZ were a lot better than we remembered.

It’s sort of like what Atlanta Falcons quarterback Matt Ryan has achieved this year.  It’s his ninth season in the league, he’s always put up great stats and his teams have always been pretty good.  Now he has a career year, helms one of the greatest offenses ever and makes a run to the Super Bowl.  Suddenly: “oh yeah, Matt Ryan is one of the best quarterbacks in the league.”  It’s his A History of Violence moment.

How did Cronenberg follow up A History of Violence?  By staying in the same assured, accessible (for Cronenberg standards) vein.  Eastern Promises brings back Viggo Mortenson for another dark and violent thriller, with plenty of subtext and subtle text going on just under the bloody surface.

Focusing on a Russian Mafia organization operating in London, Mortenson plays the Family’s stone-cold driver/enforcer/confidante.  A young Russian prostitute dies in a hospital during childbirth and the nurse/midwife (played by the ever-consistent Naomi Watts) takes the woman’s diary, in hopes of translating it and tracking down the baby’s family.

It leads her to the Russian mob and the world of sex trafficking and to Nikolai, Mortenson’s charismatic and trustworthy driver.

I won’t reveal much more of the plot, but this is among the subtlest films Cronenberg has ever made.  The violence is extreme, but limited to short bursts.  Even a scene—the movie’s Magic Center—where a naked Mortenson staves off two knife-wielding assassins in a bath house is remarkably understated.  It’s not pulse-pounding.  It’s real and it hurts.  As weird as it is to say, we feel for his naked body—the scene lasts far longer than your typical fight sequence, giving every stab and kick more gritty impact than we’re comfortable with.  I cringed, but I couldn’t look away.

Her relationship with Nikolai is all understatement too.  There’s no sex between the two, there’s not even much of a “relationship”, but their bond forms the central intrigue of the movie.  The only sex depicted in Eastern Promises involves sex slaves.  It too is realism made for maximum impact, the lifeless existence of the girls being emphasized above all else.  Cronenberg’s greatest skill is the cringe-but-can’t-look-away scene.  Now he uses it for good, when once he used it for evil.

Mortenson is charismatic as Nikolai, but he doesn’t need to say much.  He is warm and trustworthy, but also capable of great violence.  I wouldn’t be surprised if Ryan Gosling channeled him for Drive.  In a sense, Mortenson’s presence carries the entire film.  This is his finest role—and where is his History of Violence moment?  Was A History of Violence itself not enough?  He is a great actor.

Eastern Promises is a study of contrasts—a film about Russians in London by a Canadian director.  It’s also a contrast to A History of Violence: this time the violence and sex are for pain, not for pleasure.  But it’s also a companion piece.  Both rely on mood more than mechanics, with Eastern Promises being far more restrained and subdued.

In the end, that atmospheric subtlety runs out of steam.  The “plot twist”—the one that sheds Nikolai’s motivations in a new light—is too underplayed, almost to the point of it being inconsequential.  And the end seems to wrap up too quickly and maybe even too neatly.

The final shot, and accompanying voiceover, leave just enough enigmatic ambiguity to maybe make up for the (lack of) ending, but I’d be lying if I said I wasn’t a little disappointed.  This is a compelling film, featuring a star turn and a fight scene for the ages, but it could have been great.  Apparently, there is a long-gestating sequel in the works.  Apparently, Cronenberg is not involved.

A History of Violence’s many accolades might have earned David Cronenberg his Allowed to Coast Pass.  He may have been more of a provocateur and a visionary in his pre-Violence work, but Eastern Promises is still a remarkably confident, assured, and engrossing film.  Well-written and well-directed, with impeccable acting.  But it was so close to being great…