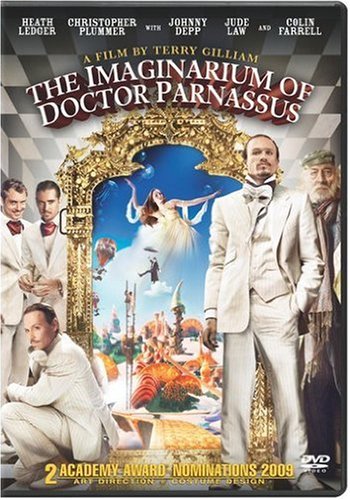 The Imaginarium of Doctor Parnassus (2009)

One of the most severely underrated of all directors, Terry Gilliam has managed to carve out a signature whimsical aesthetic that is completely original.  His films can surely be called surreal, but his particular strain of surrealism strays more towards outright fantasy.  Gilliam’s sight-worlds are colorful.  Playful, even.  Let’s not forget his Monty Python roots.

Brazil (1985) was a truly great film, the full Terry Gilliam experience, and The Imaginarium of Doctor Parnassus is possibly the most Brazil-like of his non-Brazil films.  However, Parnassus was made over thirty years after Brazil.  Has the old timer lost his touch?

Gilliam’s touch is far from gone; the Off-Screen Python is at his most self-indulgent here.  The Imaginarium of Doctor Parnassus is perhaps one of Gilliam’s most confounding films, a modern fable about a grimy travelling theater troupe who have access to real magic.

That’s only the tip of the iceberg lettuce.  The film isn’t incomprehensible, but it is damned hard to follow exactly what’s going on (and who).  Christopher Plummer plays the titular Doctor, a drunken mystic who is over a thousand years old.  His daughter (played by a waifish Lily Cole), an assistant (Andrew Garfield), and a dwarf (Verne Troyer, of Mini-Me fame) assist him in his magical endeavors—the main draw being a mirror that serves as a portal to Imaginationland.

As if that wasn’t enough, there’s also Tom Waits as the Devil, to whom Dr. Parnassus owes his daughter’s soul to.  And Heath Ledger plays the mysterious hanged man Tony, who takes a shine to Parnassus’ 16-year-old daughter Valentina.

The film is a visual spectacle and there is definite deep meaning here, something very close to Terry Gilliam’s heart, but it remains out of my grasp.  Rich in symbolism and metaphor, perhaps repeated viewings would help parse out the hodgepodge.  Something about alcoholism and abuse?

Imaginarium is significant for being Heath Ledger’s final film, as the promising Australian actor died during production.  To remedy this, Johnny Depp, Jude Law, and Colin Farrell all play versions of Ledger’s character throughout the film, usually when he travels beyond Parnassus’ mirror.

Roger Ebert, in his review, suggests that Gilliam didn’t have to severely alter the story to compensate for Ledger’s untimely death, and I agree with him.  I have no idea what Gilliam wants to say with this film, but I’d wager that his multi-mirroring themes were always part of the plan.

The film is at its best when it travels through the mirror and into CGI-filled Imaginationland.  Gilliam is best remembered for his Monty Python animations and Parnassus’ Imaginarium instantly brings to mind the absurdity of the Flying Circus (particularly in a musical number with cops dressed in drag).  Once we are in this world, the possibilities of the film and director are limitless.  Once we head back out into modern London, though, is when the film ironically loses direction.

The grand finale is a long sequence that calls to mind the ending of Brazil: a surreal and almost nightmarish journey down the rabbit hole where nothing is as it seems and there is no clear end in sight.  Even if the overall big picture isn’t clear, it is a fascinating conclusion nevertheless.

The Imaginarium of Doctor Parnassus is never boring.  Confounding maybe, but never boring.  Gilliam’s trademark wiiiiiiide-angle lens makes sure to capture imagination—hallucinatory daydreams; the very essence of the stuff.

When Gilliam is trying to make a grand statement, as he obviously is here, it sometimes comes off as an “everything and the kitchen sink” exploit.  No matter.  I enjoy Animal Collective’s 2011 album Centipede Hz, which has often been criticized for the same approach, and Gilliam’s films are a treat for the eyes as much as Animal Collective’s music is a treat for the ears.

So often Gilliam’s films seem like direct scenes from the left side of his brain.  Imaginarium is no Brazil or 12 Monkeys even (I won’t disclose how I feel about Fear and Loathing in Las Vegas), but it is certainly a trip.

The Imaginarium of Doctor Parnassus (2009)