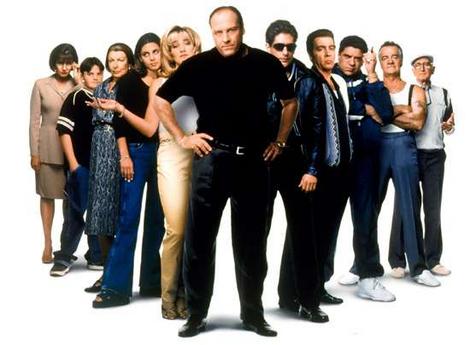 Who else could it have been?  The anti-hero to end all anti-heroes.  Except all he did was spawn more anti-heroes, so many anti-heroes.  No matter, Tony S is probably the most compelling of them all.  He is certainly the funniest.  And funny goes a long way.  This season is Tony at his most sympathetic and our “Rooting-for-Tony-o-meter” is at a healthy 10 (out of 10).

The true villain of the show, even if everything she says is unintentionally gut-busting hilarious.  I don’t think we all understand the magnitude—she wanted her own son dead.  Because he put her in a nursing home!  Or was it a retirement community?

Somewhat plot device, somewhat shallow side character, Melfi has often come under a lot of scrutiny from fans and critics.  But look no farther than her scenes in the season finale and see why she earns this coveted Top 3 spot.  Besides, how else would we get all the shadings of Tony’s inner-workings if not for her therapy sessions?  Voiceover?  Please.

A hotheaded douche for much of the early portion, until a mock-execution scared him shitless (he, um, actually shit his pants) and made him more sympathetic.  But we didn’t gain empathy for young Chris until we watched him struggle to write a script and find identity in his life.  And Chris was right actually.  He doesn’t have an arc.

Stereotype, sure, but hilarious nonetheless.  Commissioned to kill Mikey Palmice, he ran into poison ivy, cried “I can feel it itching already!”, and hastily pulled the trigger.

Tony’s main opposition, but not really a villain, now is he?  As we saw in “Boca”, he has a tender side too.  A source of dry old-school humor to go along with it.  Best scene: denying that Tony was the one operating the business behind the scenes and that he, Corrado “Junior” Soprano, was in fact the Big Boss.  Becomes one of my favorites in the next couple seasons.

Steven Van Zandt from the E Street Band.  That’ll get you Top 10 any time, in any list.  And we even get “State Trooper” to close out the season!  Silvio is the guy who’s always there but isn’t really there.  He adds the much-needed color to fill out the mobster palette, that spicy gangster special sauce.  No stories solely about him, but damned if it is a story without him.

“College” isn’t just a landmark episode for Tony, it’s a landmark for Carmela and all aspiring female TV characters as well.  Add some emotional complexity to that tired housewife shtick, and, by season’s end, you’ll be calling out the neighborhood priest for the manipulative, mooching asshole that he is!  By season four, you might even divorce your husband!

Still bratty and privileged and spoiled and snotty, but still hot and sweet and hot.  My peak admiration for Meadow as a character is probably the “College” episode and my peak dislike for her is whenever her annoying friend Hunter is in the room.

The world treated him like shit so he jumped off a bridge.  If that’s all you remember of alcoholic gambler whorehouse-frequenting crooked cop Vin Makazian, then take it as a cautionary tale.  One of the true tragedies of season one.

One thought on “The Sopranos S1 Power Rankings”