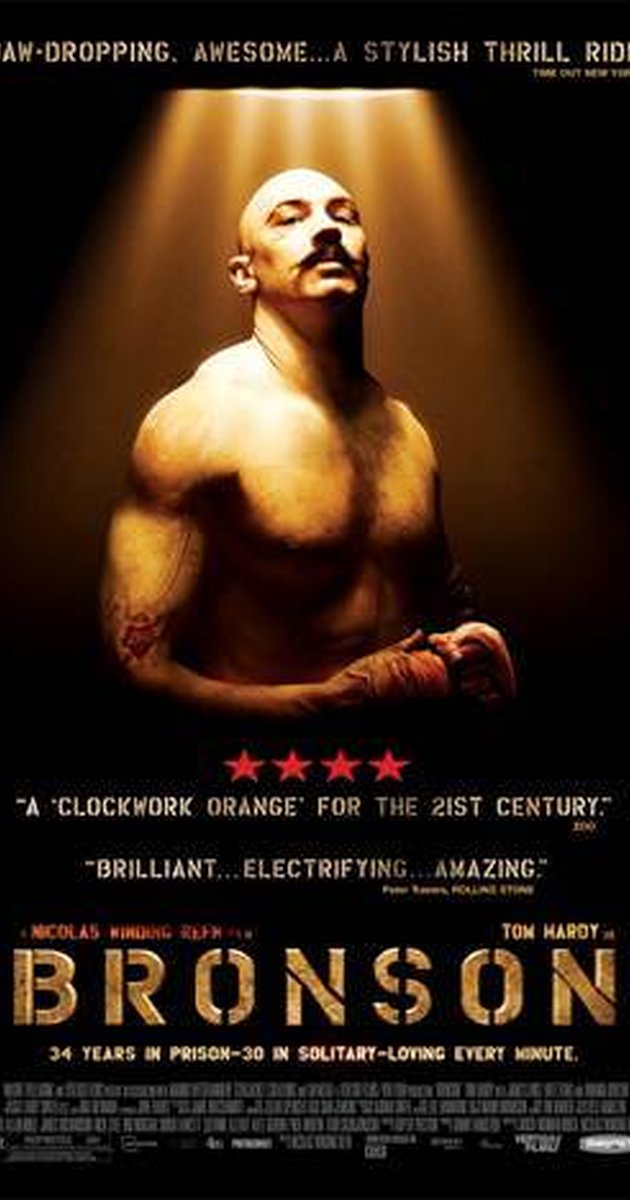 The Danish director Nicolas Winding Refn has recently become a cinematic name to take note of.  His 2011 thriller Drive was great.  NWR—Nicolas Winding Refn—makes the cut as an auteur because of the heavily stylized nature of his films.  There’s no questioning that he’s an immensely talented director, but sometimes his films can feel empty—all dazzle no razzle.

Refn subscribes to what I call the “School of Style”, a recent trend picked up throughout the previous couple of decades.  Tarantino is the Headmaster of the School, but his films have such great style that the substance doesn’t even matter.  As such, followers of this School (many of them triple-named, like Alejandro Gonzalez Innaritu, Lars Von Trier, and Refn himself) ought to have their own unique flashy style, lest they want to become pale imitators of what has already been done.  Either that or work on deeply explored common themes.  That’s what I thought.

Bronson stars Tom Hardy—one of my favorite British actors—as the titular Bronson.  Tells the true story of Michael Gordon Peterson, who dubbed himself Charlie Bronson, a troubled man who has but one goal in life: to become Britain’s most dangerous prisoner.

That’s the main gist of the story, as Bronson goes from prison to prison to looney bin to prison to out on the streets and back to prison, plenty of bloody fighting to go around.  I recently watched South Park’s season 7 classic “The Terrance and Philip Movie Trailer”.  The hilarious episode features a TV show called “Russell Crowe Fightin’ Round the World”, which is just Russell Crowe picking random fights around the world.  Bronson doesn’t stray too far from such a narrative, as the titular madman fights and then fights some more, albeit with far fewer laughs and limited to Britain rather than the entire world.

I didn’t love this film, but it was enjoyable enough.  While it ends up hitting the same beats repeatedly as it progresses, it isn’t much of a slog to get through.  But it does feel longer than its relatively short 90-minute running time.

Tom Hardy is brilliant in a role that is perfectly suited for him.  Hardy is one of the best actors I’ve ever seen at making forceful gestures his talking points.  The way he points, waves, and punches say more about his character than any dialogue could, yet he delivers the dialogue—thick Cockney accent implored—just as well.

Yet I couldn’t help but be reminded of A Clockwork Orange as I watched Bronson.  Both feature lead characters who love ultraviolence simply because they love ultraviolence, not because their parents or society shaped them that way.  Several scenes feature Bronson maniacally kicking his captors’ asses scored to graceful classical music, which is as Clockwork as it comes.

Other scenes feature bright neon lights and pulsing ‘80s synthpop, which is as Nicolas Winding Refn as it comes.  “Your Silent Face” by New Order!  Great tune.

Homages or rip-offs aside, Refn is still an immense stylist through and through.  Whatever you want to say about the message of his films (or lack thereof), you can’t argue that they’re not a treat to look at.

Great lighting, great framing throughout, the whole dazzle.  Even some semi-surreal fourth wall breaking pervades the film, as Bronson narrates and performs one-man shows to a theater audience in abrupt vaudeville interludes.

The ability to directly incorporate us, the audience, into the film is Refn’s greatest trick.  There’s even loud applause and several shots of an audience sitting in a theater, as to superimpose his art upon us.  That’s us out there, applauding his violence.

But, as with many Refn films, it is all dazzle and no razzle.  Refn doesn’t really say anything with this film—even the fourth-wall breaking has no meaning.  Bronson makes for a great character study, but there is no message.  Sometimes, as Refn and the School of Style know, there doesn’t need to be a message.  Sometimes the main character is bad just because he’s bad and sometimes a film about violence doesn’t need to make a statement on either side of the issue.  Like the audience in Bronson’s imaginary theater, you just sit and watch.

It’s not a film that makes you think, or one that you contemplate days after.  But Refn has a vision and that vision is to be visual.  Sometimes, that’s good enough.