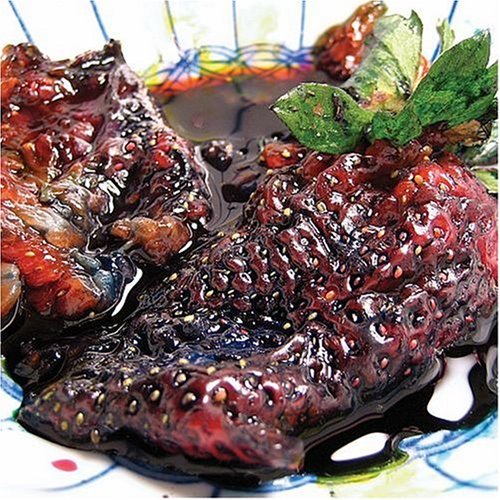 Because “Fireworks” is one of the greatest songs of all time—quite possibly the best of the aughts (2000s)—I’m tempted to give this album an A+.  That’s how good of a song “Fireworks” is.  Sort of like how “Supper’s Ready” is so superb that it elevates Foxtrot from a great album to a bloody masterpiece (Genesis, 1972, prog rock).  “Fireworks” puts Strawberry Jam in the same enviable position—is it good enough to lift Animal Collective to a perfect score?

With a heavy heart, the answer is no.  “Fireworks” is magnificent—surely there is no doubt about that—but the rest of the album isn’t A+ material, although there are a number of great songs here.

“For Reverend Green”, another superhero vocal workout from Avey Tare, and “Derek”, Panda Bear’s gentle’n’jolly closer, are the two other songs from Strawberry J that are also must-listens at any time or place.  The penultimate track, the haunting “Cuckoo Cuckoo”, is another winner, but it’s still not enough to give the album that sublime something that Meriweather Post Pavilion possesses.

The one thing that would be enough to get an A+?  If the nine-minute single “Safer”—recorded around the same time but left off the final cut—was added to the runtime, preferably between “Winter Wonder Land” and “Cuckoo Cuckoo”.

“Safer” is an absolute beast of a song, another one of the band’s absolute best.  But it is not found within the run time of Strawberry Jam, so discussing it is only arbitrary.  Had it been on the album, then we are undoubtedly in A+ territory.

Strawberry Jam finds Animal Collective changing directions again, this time into their best and most neo-psychedelic selves.  This is a bright album, especially in the early goings.  “Peacebone” invades from noise to electronic kaleido-bop and never loses sight of its joyful whimsy.  The same rings true for “Unsolved Mysteries” and the first half of Panda Bear’s “Chores” (the second half is ambient droning of the highest degree, with Bear’s voice the only thing grounding us in reality).  Lots of noise, lots of fizz, lots of stuff going on just under the surface—the roots of Centipede Hz are here, though Strawberry Jam is not as extreme.

The one-two punch of “For Reverend Green” and “Fireworks”—both songs over six-and-a-half minutes in length—is one of the best mid-album double doses that I can think of.  Both songs feature MVP performances from Avey Tare vocally, and melodically the songs are so rich that you can practically taste the album cover.

Speaking of food, it always seems to be turning up in the Collective’s lyrics.  Food, sex, drugs, and the occasional deep musing are topics that the carefree band often revisit.  All four are present throughout Strawberry Jam—ranging from relatable (“the taste of your cooking can make me bow on the ground” and “I want to get so stoned/And take a walk out in the light drizzle”) to funny (“He’ll only be a friend if he touches your breast”) to impossibly deep (the entirety of “Cuckoo Cuckoo”).

But the album’s best lyrics, at least for me anyways, come at the end in probably my favorite Panda Bear song (for sentimental reasons).  Backed by a sun-drenched Afrobeat melody, “Derek” finds Panda Bear singing about his childhood dog, subtly comparing it to raising a child of his own.  It’s heartwarming and wins me over on pure nostalgia, but the best part is the end—the song changes gear for a droning and rolling conclusion, Panda Bear singing at his absolute best.

Strawberry Jam finds Animal Collective at the peak of their powers and has the best of both worlds: the noisy electronic experimentation and the sunny indie pop melodies.