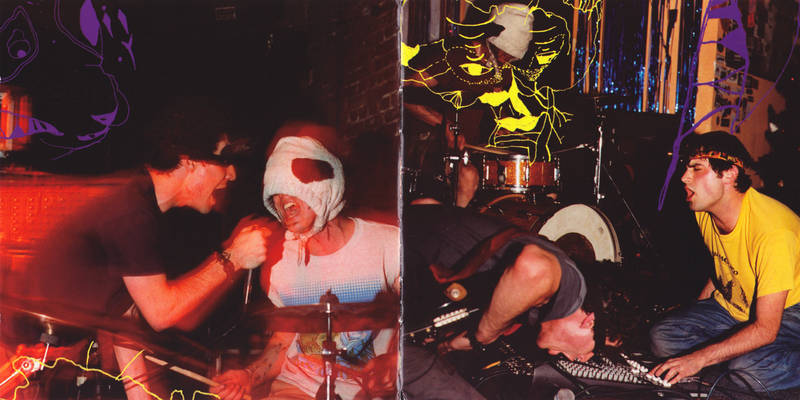 Depending on your point of view, the cutoff line for early Animal Collective is Sung Tongs.  Anything beyond that is the more commercialized shit.  Just kidding, that’s where the better shit lies, but the old shit ain’t too bad itself.

Here are ten things to look at from Animal Collective’s early years.

Animal Collective’s 2000 debut is all Avey Tare—he sings, writes lyrics, plays the instruments.  But the thing that holds the entire album together is Panda Bear’s MVP-caliber performance from behind the drum kit.  His lively and jazzy brushstrokes give the dreamy and airy debut a much needed anchor in reality.

The band was always adept at layering sounds together to create a highly mechanized and unlikely rhythm.  That practice was at its most daring in the first half of the decade, with Animal Collective going to extreme lengths to prove their point.  Just listen to the aggressive shouting match on “Hey Light” (Here Comes The Indian) or the churning electronic gargle of “Kids on Holiday” (Sung Tongs).  But nowhere is this theory more impressive than on the band’s opening song from their debut: the mighty “Spirit They’ve Vanished.”  True electronic noise—like NOIIIZE noise—blares out, dissonant as all hell.  But it settles into a groove that must be heard to be believed.

With that title and with this band and with that concept, you would expect Campfire Songs to be something special.  Some people do get that impression, though, and that’s totally fine with me, I just find the 5-song recorded-on-a-porch-during-wintertime album to be a bit of a bore.  But could you imagine walking past a porch on a cold winter’s day and hearing this music?  It would be a truly awesome experience, to tell the truth.

Isn’t that a truly great album cover?  Dave Portner and Noah Lennox as happy x-ray skeletons, with a striking red background and a curious title?  Count me in.  This tape’s already a winner before you even listen to it.

Animal Collective’s latest album, Painting With, has gotten a bad rap for its familiar sound (only relatively) and its silly immaturity.  I like Painting With, to an extent, and as an Animal-Collective-in-the-2010s apologist, I would like to point you in the direction of Danse Manatee, Animal Collective’s terrible second album (I gave it a generous C).  Listen to this compared with Painting With and you’ll be clambering for the juvenile sounds of “FloriDada.”

There’s lots of electronics on the Collective’s first five albums, but not much in the way of electric guitars.  It appears on Here Comes The Indian and gives immediate resonance to the album.  From Feels onward, the band would employ more electric guitar and adopt a somewhat more traditional rock-oriented approach (I’m being generous here).

What other bands/albums does this genre even apply to?  It’s all a bit goofy, if you ask me, sorta like folktronica, but that’s even a little clearer to spot out.  Nevertheless, the only freak folk album that matters is Sung Tongs and I can’t even imagine any other groups trying to imitate it without getting laughed out of the recording studio.

Avey Tare doesn’t unleash his full potential until Strawberry Jam, and you could even pinpoint the exact moment to “For Reverend Green.”  But Avey more or less proves himself a very competent singer throughout the band’s first four albums, singing quietly but occasionally letting loose (“Slippi”, much of Sung Tongs).  Sung Tongs showcases that Animal Collective has the potential to be the greatest vocal band of the 2000s, a title that they do end up taking.

Animal Collective’s cumulative average from 2000—04 is hovering near a B+.  Their two highest rated albums—Spirit they’re Gone and Sung tongs—both feature only Avey Tare and Panda Bear.  Apologies to Deakin and Geologist, but do with that information as you wish.  Also, tentatively, Animal Collective reached my yearly top 10 twice in this time frame.  Spirit They’re Gone, Spirit They’ve Vanished is on the borderline of being a top 10 album for 2000, while Sung Tongs is definitely one of my favorites of 2004, most likely top 5, maybe even top 3.

The best of early Animal Collective