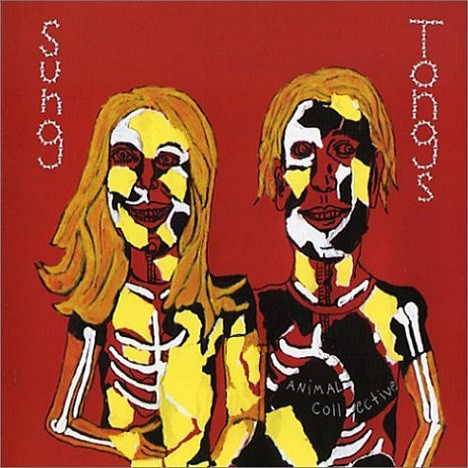 So, uh, how about that freak folk?  While I’m not totally sure as to other albums in this incredibly niche sub-sub-genre, I do know that I kind of like it—well, Animal Collective’s idea of it.

Sung Tongs—tongue songs? —is a delightful and engrossing listen, not like anything I’ve ever heard.  This is where Animal Collective becomes Animal Collective, in a sense.  Sure the noisy electronic loops have been there since day one, but this is the album where the vocal harmonies and idiosyncratic quirks of the performers really start to bleed.

A lot of people don’t realize that Sung Tongs has as much electronic whiz-pops and whiz-bangs as it does delightfully charming freak-folk, or at least more than you’d initially think.  Campfire Songs—the Collective’s previous all-acoustic set—was dragged down by its somewhat boring monotony and had me begging for a random electronic squall to add some pizazz.  It’s welcoming then that the album begins with an electronic burst before devolving into one of the band’s most immediate songs.

“Leaf House” is alive with beautiful pop melodies buried just under a latticework of angular acoustic guitar strumming and strange vocal acrobatics.  Avey Tare and Panda Bear—the only performers on the album this time ‘round—weave a tapestry of intricate vocal melodies that must be heard to be believed.  Sometimes they make up their voices as percussion—eighth-note “aa-aa-aa-aa-aa” sounds that build into a symphony.  Other times, the pair’s voices are indistinguishable, trading lyrical jigsaw melodies back and forth that are only comparable to the intricate mosaic of Beastie Boys raps.

While it is an experimental record at its core (read: freak folk), I don’t come back to Sung Tongs for the avant-folk accoutrements.  No, I return to this record because it is filled with warm, feel-good melodies.

“College” is 50 seconds of pure Beach Boys nostalgia, but instead of “be true to your school” the message is “you don’t have to go to college.”  And it is sung so sweet and sunny that for those 50 seconds, I wish I took Tare ‘n’ Bear’s advice.

I listen to this record and marvel at it.  It’s no wonder that these guys broke it big as indie darlings not long after this.  Listen to “Who Could Win a Rabbit” or “The Softest Voice” or “Winters Love”—you can’t tell me a band with vocals this good and melodies this beautiful would stay a secret forever.

Great song to great song, with a nice big relaxing folk trance a la Campfire Songs in the middle (“Visiting Friends”).  Sung Tongs has great structure and the music is always interesting.  Even the unlistenable “Whaddit I Done” works as a closer.