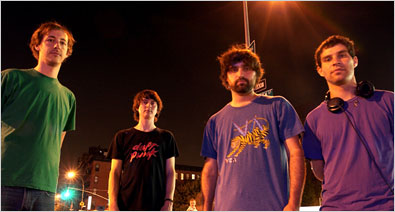 Links to all Animal Collective reviews

SUMMERTIME CELEBRATION WITH A “BAND OF THE DECADE” CONTENDER

With the last 70 degree days winding up in my hometown, I feel that there is no better time than now to celebrate the last gasp of summer with the good ol’ acid-trippin’-balls neo-psychedelic experimental ragtime band from Baltimore, Maryland–that’s right, Animal Collective!

Because Animal Collective is a summertime band after all.  I think the last time I went on a hardcore Animal Collective kick was actually during those first few days when it first started getting warm and sunny again after the winter and muddy spring, earlier in the year.

AC isn’t a band that defines the moments of a summer, but they serve best as a sound to both ring-in the good times that “Summer ‘xx” represents and as a last chance to happily reminisce about them.  AC’s music is like a celebration; there truly is no livelier or noticeably joyous band.  And, yes, they can go deep and sad and thought-provoking too, but the bulk of my Animal Collective love happens to be their sunny stuff.  Besides, isn’t Merriweather Post Pavilion just about the most smile-inducing album since Wild Honey?

I initially HATED Animal Collective.  That’s right, baby.  Hated their strange and quirky vocals, hated their complete and utter disregard for respectful soft-LOUD dynamics, hated their nonsensical and faux-“whimsy” lyrics, hated their communal revolving-door participance-optional free-spiritedness, and, most of all, hated their “Best Kept Indie Secret, a hipster’s diary” cred.

How many experimental rock bands–and these guys are truly as experimental and unique as anything that’s ever arisen from music’s depths–can be called “charming” anyways?  Are they even playing instruments or are they simply master-loopers and experts in layering?  (The answer to the latter is yes and yes; the answer to the former is: probably just them and Brian Eno)  In fact, it doesn’t even matter how much they actually “play” vs. “program” because 1) it sounds unbelievable, and 2) whatever reservations you may have against “artificial” electronic-oriented “rock” music are immediately brushed to the wayside by the sheer impressiveness of the vocals.  Avey Tare is a singer for the ages, taking vocal risks that not even Stephen Malkmus could dream of.  And Noah “Panda Bear” Lennox provides the smooth liquid counterpoint to Tare’s dynamic abrasiveness: it sounds as sweet as Brian Wilson, but with a certain knack for pronouncing all vowels relatively the same (beautifully otherworldly really, but keep a lyric sheet handy).

There’s two other guys in the group, ahem, collective–Deakin and, uh, Geologist.  They may not even exist (well, Deakin definitely exists, he released a solo album, but I’m not entirely convinced that Geologist is actually tangible, despite what concert appearances might suggest).  The band is truly all about Avey Tare and Panda Bear and the sequenced and sampled music that backs them (or in the case of Sung Tongs: fucked up and freaked out folk).  And at some points, the band is truly all Avey Tare.  That’s why Panda Bear has a nice solo output to his name as well, and also why he’s the hipster’s-hipster’s preferred favorite–sort of like preferring McCartney to Lennon, but for reasonable reasons.

Like the revolving door policy that conveniently only involves Deakin and Geologist, Animal Collective’s music is constantly changing also.  They began as a quiet-yet-noisy electronic avant-garde outfit, then transitioned to a lo-fi highly surreal folk atmosphere, reached their peak as a digitally-inclined noise-pop quartet (sometimes trio) reveling in sun-drenched neo-psychedelia, and have now found themselves in a comfortable groove of who-gives-a-fuck-we-do-what-we-want mysticism.  It’s quite an output, and quite unlike anything I’ve ever heard.

So I listened and I listened some more to the entirety of the Animal Collective oeuvre and I saw these guys for what they really were: geniuses.  Stoned yes, definitely, but also definitely geniuses.

And now I LOVE Animal Collective.  I love the complex and intricate and impeccably sung vocals, the sudden twists and turns and sharp contrasting dynamics that run rampant throughout every song, the charmingly whimsical and on-closer-look poignant lyrics, and the joyous free spirit that they radiate simply from the pleasure of playing and making music.

I still don’t like the “oh yeah, well have you heard of Animal Collective?” snobbery that portends a lot of the public Animal Collective discussion.  However, their last two albums haven’t been well-received on Pitchfork Media, so the “My taste…” Animal Collective fans/snobs haven’t been too active for basically the entirety of the 2010s.  But, to borrow a line from the Central Scrutinizer, “who gives a fuck anyway?”

Nowadays, I’ll defend Animal Collective anywhere.  On the streets, in the houses, etc. They are truly one of the most unique bands of all time, and time will see to it that they are one of the most influential–I like to believe they had a major part in the electronic indie boom of the 2010s; not all credit can go to Radiohead.  Not only were they the most unique, but they were also the most consistent and, probably, best band of the 2000s.

So join me as I travail through Animal Collective’s entire discography (some EPs included!) throughout the week.

*DISCLAIMER: The “week” in “Artist of the Week” lasts as long as it takes me to get through the discography.  Perhaps “month” may have been the smarter choice?

Band of the Week: Animal Collective

One thought on “Band of the Week: Animal Collective”